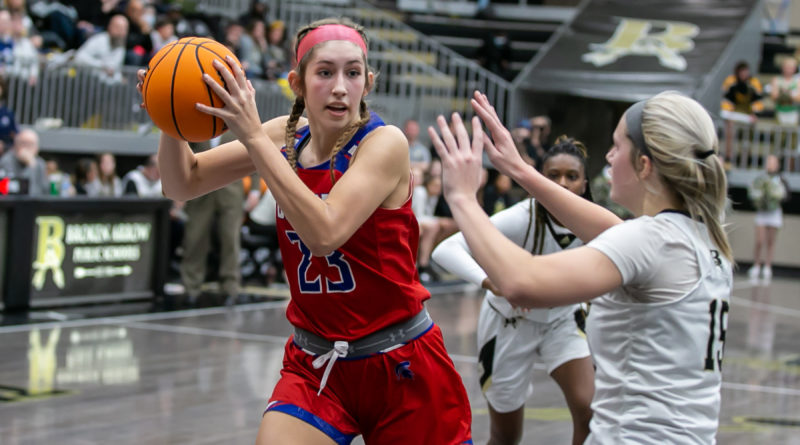 Edmond North and Choctaw remain as the top two squads in this week’s rankings. But several other highly ranked teams did their part, especially those which claimed tournament championships over the weekend.

The Lady Huskies played back-to-back games against Mustang and won both. After winning the Mustang Holiday Classic on Dec. 29, North turned right around and won again at Mustang, 68-51, on Jan. 4. A scheduled game Tuesday against Moore was postponed due to COVID-19, so the Lady Huskies’ next ballgame is set for Friday, a home contest against Edmond Deer Creek.

On Jan. 4, the Lady Yellowjackets posted a 46-39 win at home against Putnam City West. They haven’t played since then and it might be a while before Choctaw plays again. A scheduled game Tuesday with Midwest City was postponed due to COVID-19, and Choctaw’s next scheduled event is the Moore Tournament Jan. 20-22.

Union took care of business on the road at Bartlesville, posting a 59-45 win on Jan. 4. A scheduled game Tuesday against Jenks was postponed due to COVID-19. Union is set to return to action at home Friday against Broken Arrow.

The Lady Tigers have held each of their last two opponents to 20 points, the latest a 59-20 win at Blanchard on Jan. 4. Tuttle’s scheduled game Tuesday with Bethany was postponed due to COVID-19, so the Lady Tigers are set to play again Saturday at home against Heritage Hall.

Carl Albert’s 10-game winning streak to start the season was stopped on Jan. 8, a 59-49 loss to Broken Arrow in the title game of the Bartlesville Invitational. The Titans returned to the court Tuesday against Lawton.

The Lady Indians began 2022 by winning the Anadarko Tournament, capped by a 47-32 win against Oklahoma City Millwood in the title game. El Reno has scheduled home games Tuesday against Del City and Thursday against Lawton MacArthur before going to Guthrie the following night.

PC West dropped a pair of games against two higher ranked teams, falling to Choctaw on Jan. 4 and to Classen SAS on Jan. 8 in the title game of the Putnam City Invitational. Tuesday, the Lady Patriots played Putnam City North and will play Putnam City on Friday.

The Lady Buffaloes turned in an impressive showing at last weekend’s Noble Tournament, winning all three games by double digits. In the title game, McAlester posted a 52-41 win against Duncan. Tuesday, the Lady Buffs played at home against Bishop Kelley and will travel to Durant on Friday.

Bixby followed up its Tournament of Champions title with a 39-29 win at Broken Arrow on Jan. 4 and a third-place finish at the Putnam City Invitational, falling to Classen SAS in the semifinals before beating Putnam City for third place. The Lady Spartans played at Muskogee on Tuesday and will head to Jenks on Friday.

The Lady Bobcats continue their roll, the latest a strong showing at the Slick Hills Tournament in Apache, winning all three games by an average margin of exactly 40 points, including a 67-38 win against Hobart for the title. Hydro-Eakly played Geary on Tuesday and will go to Canton on Friday.

Lincoln opened its annual Winter Classic with a solid win against 4A power Fort Gibson and beat another 4A school, Stilwell, to reach the title game. But the Lady Bulldogs came up short in the title game against 5A contender Sapulpa, 40-35. LC returns to action Thursday and Friday, road games at Holland Hall and Rejoice Christian, respectively.

The Lady Lions posted a 79-30 win at Panama on Jan. 4 and will be at Wilburton on Thursday. Next week, Howe will compete in the annual LeFlore County Tournament.

On Jan. 4, the Lady Bombers recorded a 46-40 win at Putnam City North. Their next scheduled game is set for Friday, at home against Ponca City.

The Dutch began the post-holiday portion of their schedule with a 65-35 win at Victory Christian on Jan. 7. A busy week commenced on Tuesday with a game against Rejoice Christian, followed by a home game Thursday with Lincoln Christian and a road game Friday at Metro Christian.

In their first four games since coming back from the holiday break, the Lady Warriors have scored at least 63 points in winning all four. That included a 63-49 triumph against Watonga to claim the Three Rivers Conference Tournament title. Okarche has a scheduled home game Friday against Thomas-Fay-Custer.

The Lady Tigers rang in the new year with a 65-23 win on Jan. 4 at Edmond Deer Creek. They are back in action on Friday with a home game against Moore.

Although the Lady Maroons lost to Tuttle in the title game of the Bertha Teague Classic in Ada on Dec. 30, they bounced back with a stellar showing at the Wheat Capital Tournament in Enid this past weekend. That included a dramatic 40-39 win in the title game against defending 3A champion Jones. Perry was at home Tuesday against Chisholm and will travel to Newkirk on Friday.

The Lady Longhorns won their first two games at the Wheat Capital Tournament in Enid, beating a pair of 4A foes, before falling 40-39 to Perry for the title. Jones played at Tecumseh on Tuesday and heads to Little Axe on Friday.

In their first three games since returning from the holiday break, the Lady Indians have averaged 64 points in winning all three. Pocola traveled to Wilburton on Tuesday and will be at home Friday against Hartshorne before participating in next week’s LeFlore County Tournament.

The Lady Eagles started 2022 off on a high note, defeating archrival Clinton on Jan. 4 before winning all three games at their annual tournament, capped by a 75-45 win against Class 5A Piedmont for the title. Weatherford is back in action Friday at Bethany.

Each of the Lady Broncos’ past two losses were to Edmond North, the latter a 68-51 decision on Jan. 4. Mustang is set to head to Westmoore on Friday.

The Lady Sandites won all three games at a tournament on New Year’s weekend in Tampa, Fla., then followed that up with a 60-40 win against Tulsa Booker T. Washington on Jan. 4. Sand Springs played at home Tuesday against Broken Arrow and goes to Bartlesville on Friday.

Lomega was upended at home by Okeene, 39-34, on Jan. 4. The Lady Raiders attempt to bounce back beginning Friday with a game at Deer Creek-Lamont.