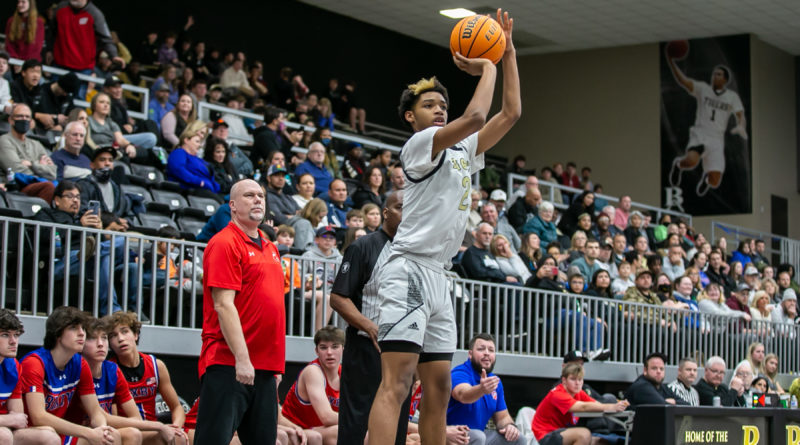 A vast majority of high school boys basketball teams in Oklahoma rang in the new year by playing in various tournaments.

One of those squads ended 2021 with a big tournament title and began 2022 with another championship, which took it to the top of the latest SBLive Oklahoma Top 25 rankings.

Coming off their Tournament of Champions title before the new year, the Eagles followed that up with another tournament crown, taking the Bishop McGuinness Classic with three wins against three solid 6A teams, including Edmond Santa Fe in the title game, 61-52. Del City played at El Reno on Tuesday.

The Yellowjackets remained undefeated following their first-place showing at last weekend’s Wheat Capital Tournament in Enid. In the championship game, Kingfisher outlasted another undefeated squad in Alva, 41-39. On Tuesday, the Yellowjackets took on Blanchard.

Memorial hasn’t been in action since Dec. 29, when the Chargers lost to Del City for the Tournament of Champions title. The Chargers have a pair of crosstown road games this week, Tulsa Central on Tuesday and Will Rogers on Friday.

After winning the pre-New Year’s Day Coca-Cola Classic in Fort Smith, Ark., the Patriots followed that up with an impressive 74-61 win at Choctaw on Jan. 4. But in the Putnam City Invitational, they needed overtime to escape Muskogee before falling to Moore in the semifinals. PC West is back in action this week against its neighboring rivals, Putnam City North on Tuesday and Putnam City on Friday.

The Trojans began 2022 with an 84-51 win against Sapulpa on Jan. 4. Jenks returned to the court this week with a pair of games against two of its biggest rivals, a road game at Union Tuesday before returning home Friday to face Bixby.

The Pirates had an impressive showing at last weekend’s Kingston Tournament, winning all three games by double digits. That included a 54-43 win against Kingston for the championship. Dale returns to action on Friday with a road game at Wewoka.

Class 4A title contenders, the Conquerors defeated fellow 4A contender Holland Hall for the second time this season, the latter a 57-49 win on Jan. 7. Victory played Tuesday at Regent Prep and will go to Rejoice Christian on Thursday.

The Saints opened the Route 66 Tournament in Stroud last weekend with double-digit wins against Stroud and Bethel. Then in the title game, OCS got past Mannford, 33-31. The Saints played at Luther on Tuesday.

On Jan. 4, the Broncos held off Edmond North, 76-74, in a matchup between two highly ranked 6A squads. Mustang is back in action on Friday with a trip to Westmoore.

The Hornets may have arguably put together the best week of any team in the state. They started on Jan. 4 with a solid 69-58 win against Sand Springs before posting three big wins to claim the Bartlesville Tournament. That included a 49-48 win against 5A contender Midwest City Carl Albert in the semifinals and a 56-51 win in the title game against a rising Bartlesville squad. BTW traveled to Sapulpa on Tuesday and will go to Owasso on Friday.

Despite a tough two-point loss to Mustang on Jan. 4, the Huskies bounced back several days later to claim the Putnam City Invitational tournament title. They defeated fellow 6A contender Moore, 54-42, for first place. The Huskies returned home this week, facing Moore on Tuesday and Edmond Deer Creek on Friday.

The Spartans started the new year with an 82-71 win against crosstown foe U.S. Grant on Jan. 4 before COVID-19 issues forced the postponement of their game against Harding. Southeast took on Northwest Classen on Tuesday and will go to John Marshall on Friday.

Moore nearly pulled off a fantastic week. The Lions edged Edmond Santa Fe, 60-59, on Jan. 4 and then reached the title game of the Putnam City Invitational, highlighted by a 60-46 semifinal win against Putnam City West, before falling to Edmond North for the title. The Lions had Edmond North in a rematch on Tuesday and will go to traditional rival Norman on Friday.

After trailing at halftime, the Tigers rallied in the second half to pull away from Bixby on Jan. 4, 71-60, in a game that was much closer than the final score indicated. BA returned to the court Tuesday at Sand Springs and will go to Tulsa Union on Friday.

The Chargers needed overtime to claim a pair of wins last week. They beat Alva, 60-57, on Jan. 4 before pulling out a 53-51 overtime win against Bethany three nights later. Heritage Hall goes to Harding on Friday and will play at Tuttle on Saturday in a matchup between two of the top teams in 4A.

A tough stretch of games continued for the Titans, who entered this week having lost four of their last five ballgames. The lone win in that span was against Bishop Kelley in the opening round of the Bartlesville Tournament. Carl Albert then lost its next two games in the tournament by a combined total of four points. The Titans played Lawton on Tuesday and will face the OKC Storm on Friday.

The Goldbugs started off 2022 by winning three straight games, the latter two to reach the finals of the Wheat Capital Tournament in Enid. But, in a matchup against fellow undefeated Kingfisher, the Goldbugs came up two points short, 41-39. Alva returns to action on Thursday at Oklahoma Bible before returning home Friday to face Chisholm.

The Tigers are coming off a first-place showing at the Davis Tournament. In the title game, they posted a 43-32 win against Velma-Alma. The Tigers started another busy week Tuesday with a game at Tupelo. Then, they go to Stonewall on Friday before a home game Saturday with Wright City.

One team making its way toward title contention in 5A happens to be the Tigers. They beat Grove by 11 points on Jan. 4 before taking the Locust Grove Invitational title over the weekend, beating 4A ranked Verdigris, 59-56, in the championship game. Coweta traveled to Collinsville Tuesday before returning home Thursday to face Claremore and going back on the road Friday to face Glenpool.

The Falcons began the new year with a first-place trophy, claiming the Midfirst Warrior Classic at Anadarko. They scored 102 points in an opening-round win against Capitol Hill before holding off Anadarko in the semifinals. In the title game, the Falcons beat Lawton MacArthur, 66-59. Millwood returns home on Friday to take on Community Christian.

Union dropped a 57-55 decision to Vinita in the semifinals of the Oologah Invitational before rebounding with a 50-43 win against Cascia Hall for third place. The Cougars travel to Nowata on Friday.

The Bobcats fell to Hobart in the semifinals of the Apache Tournament before taking third place with a 59-51 win against Walters. Hydro-Eakly played at home Tuesday against Geary and will go to Canton on Friday.

One team moving up in the 4A rankings is the Indians. They started last week by surviving a road test at Spiro, 47-44. Stilwell then put together three good wins to take the Lincoln Christian Winter Classic, beating a ranked 5A Collinsville squad in the semifinals and then edging Lincoln Christian, 51-48, for the title. Stilwell played at home Tuesday against Poteau and travels to Checotah on Friday.

It was a tough showing for the Fighting Irish at their own McGuinness Classic last weekend. They dropped all three of their games, albeit to three Class 6A foes. McGuinness resumed 5A action on Tuesday with a road game at Piedmont and will play Bishop Kelley on Saturday at the Paycom Center in downtown Oklahoma City.