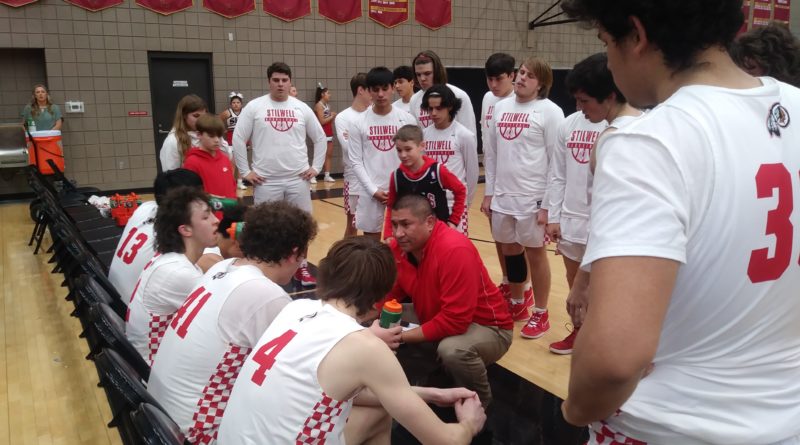 The Indians responded, starting with a 7-0 run out of the gate to begin the second half. They continued to find the basket on a consistent basis in eventually holding off Collinsville, 56-52, in the semifinals of the Lincoln Christian Winter Classic.

“One of the things (at halftime) was we came in here (at halftime) and we talked about adjustments that we needed to make and really what the adjustment was, we had to focus on running our stuff,” George said. “We know what they’re going to do on defense, we’ve just got to make sure we execute offensively.”

The Indians got their 7-0 run in less than two minutes after receiving their halftime instructions from George.

Stilwell (10-0), which will play Lincoln Christian for the title Saturday night, also received a boost from senior guard Kyler Fourkiller, who had eight of his 10 points in the third quarter. Junior forward Tony Wolf had seven of his nine points that quarter as well.

The Indians also never let Collinsville get on a big spurt, though the Cardinals did close the gap to three, 49-46, with more than three minutes left.

But Stilwell proceeded to reel off six straight points, four coming from junior guard Codey Petree, who had a team-high 15 points.

“We came out kind of slow at the beginning, we couldn’t hit any shots really, but that happens sometimes,” Petree said. “We kept on pushing on and tried to get better at defense every possession, just trying to get stops and taking it one possession at a time.

“Then we slowly came back and at halftime, we came out and hit a big punch and it kind of carried over from there.”

“Defense is where it’s at, really,” he said. “If you’ve got that defense, that’s what is going to win ballgames and championships, and that’s what we’re here for and we’re going to try to win (in Saturday’s championship game). That’s what got us through (Friday) is defense and rebounding.”

George remarked the Indians more than held their own on the boards despite having a clear disadvantage in size.

“We use our depth, and I think that we had some foul trouble early in the first half, but our depth came in there and held it down for us.”

Tyrus Teehee, a sophomore forward, had 14 points in the win as well for the Indians.

Collinsville was led by seniors Jacob Scyrkels and Oscar Hammond, who had 15 and 13 points, respectively. The Cardinals (8-2) take on Tulsa Edison in the third-place game Saturday afternoon.

In a back-and-forth Winter Classic semifinal, one late push by the Bulldogs turned out to be the difference.

Trailing 54-53 with less than four minutes to go, LC scored nine straight points to seize control. After the Eagles made one more push, closing to within three (62-59) with 28 seconds left, foul shots from Derek Stokes and Zane Hampton allowed the Bulldogs to close things out.

“Our coaches prepared us for this all year long, and all of our offseason workouts, by telling us to stay the course and commit, commit, commit,” said Hampton, a senior forward. “So we’ve been doing that; we’ve been working and we’ve been ready for this.

“We were ready when the time came.”

Lincoln trailed by five at halftime, 28-23. But Bulldog coach Andrew Baker knew if he was able to have his team stay within striking distance going into the fourth, they might have a chance.

“We needed to keep it close, because we know that Edison is a high-level team; like they can play at a high level and we know that they can shoot,” Baker said. “So we were trying to keep them from going on a big run. … And our guys did that, they battled.

“In a game like that, you’ve got X’s and O’s and execution, but it comes down to kids having heart and making plays, and our kids had heart and made plays (Friday).”

Lincoln was able to make it a game entering the fourth, trailing the Eagles by one, 40-39.

The Bulldogs (6-3) then went in front to start the fourth quarter as Hampton and senior Cainen Mar launched back-to-back 3-pointers.

Edison (7-4) grabbed the lead back with 3:39 left on a 3 from Jay Overton-Tobie. But moments later, a shot from Mar put Lincoln ahead to stay.

On the Bulldogs’ next possession, Mar found senior teammate Noah Reimer down low, and Reimer’s finish made it a three-point lead.

“All of our guys were just working and staying in there,” Hampton said. “Being ready to step up really helped us in maintaining that lead. … We’ve got guys ready to step up and they were able to make it happen.”

Hampton had 11 of his team-high 17 points in the second half. All of Mar’s 13 points also came after halftime, 10 in the fourth quarter.

“Zane hit some big shots for us; I think he hit two big 3’s down there that gave us a lot of momentum,” Baker said. “But more than that, his energy that he plays with, that’s infectious and there’s times he goes to another level with his energy and the guys on the court feel like, ‘Oh, we’ve got to keep up with him.’

“Cainen actually wasn’t feeling well (Friday), so during our shootaround, he went home to get a nap and rest and feel better. He came back and he stepped up big for us. … I thought he attacked the rim and got a couple of big buckets there at the end.”

Reimer and Stokes added 11 and 10 points, respectively, with eight of Stokes’ points also coming in the fourth.