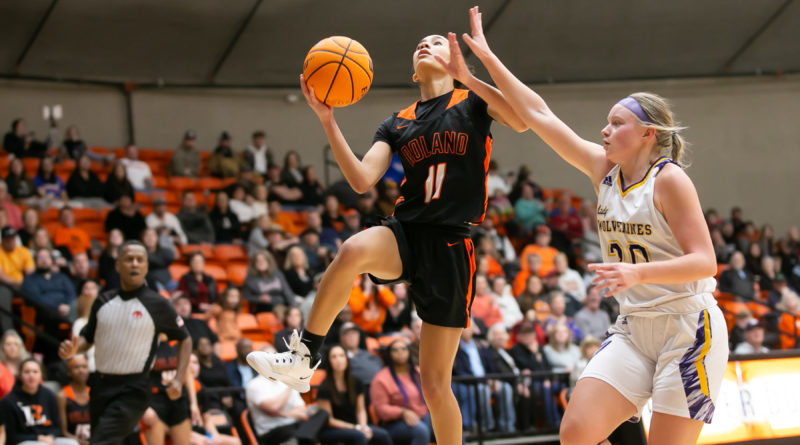 ROLAND, Okla. — Their leading scorer got plenty of points to do her part Thursday.

But when Roland’s Racheal Watie picked up her fourth foul early in the second half and had to sit for a while, she had faith her Lady Ranger teammates could help pick up the slack in her absence.

They did just that, and when Watie returned to the game in the fourth quarter, the Lady Rangers made enough plays to fend off Vian in the Armstrong Bank Sequoyah County Area Classic semifinals. Roland prevailed, 63-54, Thursday afternoon at the school’s new Ranger Dome.

“I thought our underclassmen responded well when I went out,” said Watie, who finished with 27 points. “I think that if it hadn’t been for them, we probably wouldn’t have won.

“It takes them a while to get going, but once they got going and I was in foul trouble a lot, they responded well and they came on and helped us get the win.”

Watie, a 5-foot-7 guard, is the only senior on the roster and the lone returning starter from a team that went undefeated last season before falling to Jones in the 3A title game. There are also six sophomores and two freshmen on the roster this season.

Even with the predictable ups and downs that comes with a group full of young faces, the Lady Rangers stand at 8-3 going into Saturday’s SCAC title game against Muldrow, which tips off at 6:30 p.m.

“We’re inconsistent at times, but that’s part of it,” Roland coach Greg Pratt said. “That’s part of the youth a little bit, part of the new system that we’re doing this year; there’s some growing pains but I’ll take 8-3.

“We’re sitting in the finals Saturday and the other tournament we were in (the Choctaw Nation Invitational Tournament in Talihina), we made the finals, so up to this point, I’m pleased with where we are right now.”

Watie picked up her fourth foul midway through the third quarter. She returned to the game with less than six minutes left and Roland hanging on to a 49-47 lead.

Vian cut that to one and was in position to tie affairs, but a foul shot was missed.

Watie came down with the rebound, and the other end, launched a 3 from the corner. The ball bounced high once before falling through, the fourth 3 Watie had on the evening.

That started a 9-0 run. Watie also converted a three-point play and hit a free throw to end that spurt, putting Roland up by 10, 58-48, with less than three minutes left.

Though Watie picked up her fifth foul with 1:37 remaining, the Lady Rangers were still in command. Freshman guard Haven Freeman iced the win with three free throws in the final 33 seconds after the Lady Wolverines got to within six.

“I thought that Addison Cole (a sophomore guard) and Haven Freeman and Lilly Medicine Bird (a sophomore forward) did a good job of being involved offensively,” Pratt said. “We needed to find some offense somewhere, and they made enough plays to keep us there, to keep it competitive and to keep us in the lead or never get us behind.

“Defensively, we were out of position all night long and Vian took advantage of it to their credit. … But, I was glad how we responded and Vian tied it up; we didn’t panic and that was a good test for us to see how we would handle that situation, and we responded well with some big free throws, hit some big shots and then started putting together a few stops finally.”

Like Roland, the Lady Bulldogs also had to deal with graduation losses and are utilizing a roster heavy on youth.

With the score tied at 10-all after the first quarter of Thursday’s SCAC semifinal, the Lady Bulldogs outscored Sallisaw 15-6 in the second quarter.

“We’re learning; sometimes we get a little overwhelmed with situations and sometimes we do some crazy stuff and then sometimes we make a spectacular play,” Muldrow coach Jana Armer said. “They’re just getting better and better every game.

“I had two girls back with lots of game experience and one more back that played some, and then the rest of them are brand-new, so they’re definitely a young crew but they’re a lively crew. They come to work every day, they want to be good, they practice hard, they get along. … It’s a special group and they have been since they were little; they love basketball, they want to be good and they work hard.”

Katie Grace Floyd, one of two seniors on the Muldrow roster, has helped do her part in getting her younger teammates up to speed. There are five juniors, five sophomores and two freshmen on the roster.

“Really, they just need a lot of encouragement and they’re going to make mistakes; we’re a young team, so as long as I make sure I’m leading them, on and off the court both, then we work really well together,” she said.

“I also love the sophomores; they’re a real good group of girls and they’re very talented; I can’t wait to watch them in the future, too.”

Floyd added that the Lady Bulldogs’ defense, especially in the second half, was a factor in Thursday’s win.

“I thought that our defense in the second half was what won us the game,” she said. “I think we stepped it up and just raised it to a (higher) level.

“I think we started the season on a really high note, and then we hit a few rough patches but together, we’re really on the comeback and we’ve come back stronger I think. It’s really going to help us later in the playoffs having these bumps, but we’re getting there and we’re getting better each and every day.”

Cailey Grinstead, a sophomore, led the Lady Bulldogs with 15 points, the only player on either side in double figures. She also hit two 3’s in the third quarter.

Carmen Fields, a junior, gave Muldrow a lift in the second quarter, scoring all eight of her points in that span.