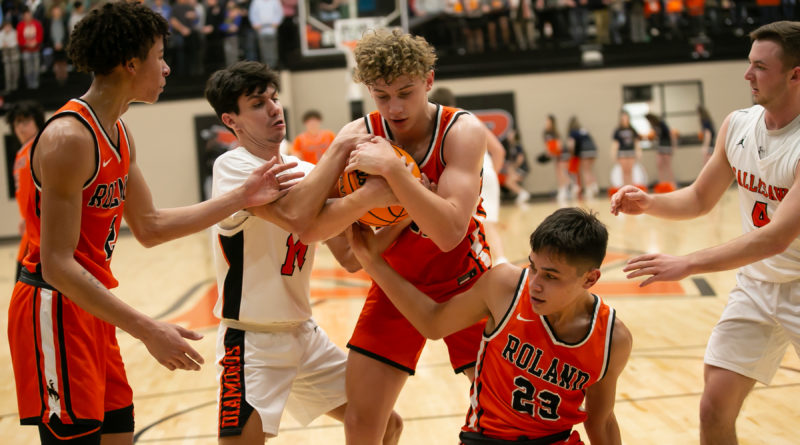 ROLAND, Okla. — Since the inception of the Armstrong Bank Sequoyah County Area Classic in 2000, Roland has dominated the boys division.

On Saturday night, the Rangers will get a chance to do something unprecedented — winning a county championship on their home court.

Roland earned that opportunity after a hard-fought 53-49 win against Sallisaw in Thursday’s Sequoyah County semifinals, held in the brand-new Ranger Dome on Roland’s campus.

“Sallisaw played a good game, and they made a couple of couple of runs on us,” Roland coach Eddie Lewis said. “I told our boys in the locker room I was really proud of the way they responded to the run and come back, and we just kept on playing and that’s what I like to see.”

The Rangers (11-1) will move on to the Sequoyah County championship game at 8 p.m. Saturday. They will play Muldrow, which beat Vian in the other semifinal Thursday.

Roland has won the most titles in the more than 20-year history of the tournament with 15, including winning it every year from 2010-19. In the past, the Rangers won those Sequoyah County titles at Sallisaw and Muldrow, which had rotated each year as the host site.

But now with the Ranger Dome in place and the school earning the right to host this year’s SCAC, Roland will now have the chance to win the title in front of its home crowd, which was loud and in full force Thursday.

“It would be great if we can pull it off; I know our kids will be trying hard, and we’ll just have to wait and see what happens,” Lewis said.

The Rangers had to take care of business on Thursday first in order to get to advance to Saturday’s title game. They received a stiff challenge from the Black Diamonds, who ended Roland’s 10-year streak of county titles two seasons ago with a win in the SCAC title game.

With less than two minutes left, it was a two-point contest, 49-47, with the Rangers in front. But they were able to reel off four important points.

After rebounding a missed Sallisaw shot, Roland sophomore Carson Wiggins threw a deep pass near the basket to a wide-open teammate, Peyton Whisenant. The junior caught the pass and executed a reverse layup for a 51-47 lead.

Sallisaw then missed two foul shots, and Wiggins grabbed the rebound. Seconds later, Roland senior guard Tuvaris Noonan drew a foul and went to the line in a one-and-one situation.

Noonan hit both free throws for a 53-47 Ranger lead with 47 seconds left.

Sallisaw got a basket on the other end to cut that to four and regained possession after Roland missed a shot. But Wiggins rebounded a missed 3-point attempt and got another defensive board as time expired to allow the Rangers to hang on.

“Team hustle, we all got rebounds,” Noonan said. “Hustle plays are all that really matters.

“We had a lot of rebounds that (turned into) put-backs, and without those points, we might have lost this game.”

In fact, two put-backs may have been the difference in Roland pulling out Thursday’s win. Both came from senior Bryce Medicine Bird, one to end the first half and the other to beat the third-period buzzer.

“That’s what I’ve talked to them about, the hustle points; we want to try to get some hustle points, and man, those were two big ones,” Lewis said. “You take two here and two there and it adds up in the course of a game.”

Noonan is one of four seniors on the Rangers’ roster. The Rangers’ only loss was to Stilwell in the second game of the season.

“Really, all the players are playing mature when it comes to the game,” Noonan said. “They might be sophomores but they’re playing like seniors, so we all just play our role and come out here and play.”

Roland had four players reach double figures in Thursday’s win. Noonan led the way with 13 points, scoring 11 of those by halftime.

Wiggins and Medicine Bird each scored 12 points, while Whisenant had 11.

Ty McHenry, a senior, had 13 points and Sim Kilpatrick, a junior, added 12 for the Black Diamonds (3-4), who will play Vian in the third-place game on Saturday afternoon.

The Bulldogs and Wolverines played an epic Sequoyah County semifinal last season, with Muldrow winning it on a buzzer-beating shot by current senior Konnor Wight.

While it didn’t come down to the final play in Thursday’s rematch, the Bulldogs did get two late shots to drop to help them prevail against the Wolverines once again.

Seconds after Vian forced a tie score, 39-all, Muldrow senior Fisher Qualls knocked down a 3 from the left corner.

Then after the Bulldogs forced a turnover on the ensuing possession, junior Trenden Collins launched a 25-footer from the top of the key, giving Muldrow a 45-39 advantage with 3:45 remaining.

“Definitely, we got the momentum when we knocked down those shots,” Muldrow coach Terry Collins said. “Vian’s a good team, they’ve always got a bunch of athletes that you’ve got to worry about. … But as a team, we feel like we kind of pulled it out.

“Those shots really helped. Big momentum boosters for us.”

More than a minute later, senior Kaden Chandler went 1-of-2 from the free-throw line for a 46-39 Muldrow lead. The Bulldogs then capped a pivotal 9-0 run as Trenden Collins soared in for a shot which arched high off the glass with 1:20 left.

“I liked the composure and us getting on the same page, and making sure that we were together and executing like we were capable of doing,” Terry Collins said.

Last season, the Bulldogs (7-4) won the Sequoyah County Area Classic and made a deep postseason run, finishing one game short of reaching the 4A state tournament. With several returning players back in the fold, the expectation level has risen.

“It’s pretty different because we don’t have the size anymore, but expectations are still pretty high, so we’ve just got to play ball,” Trenden Collins said. “We have speed, we have quickness and all in all, we can knock down shots and play defense and offense at the same time.

“We had a good start at first then it kind of got slow; we lost a few games, but now I feel like we can bounce back.”

Collins ended up with 19 points in Thursday’s win, 12 coming in the second half. He also made three treys. Wight added 12 points, making two 3’s.

Senior Xavin Lackey and junior Diego Ramos had 15 and 12 points, respectively, for the Wolverines (2-5), with Ramos making a pair of treys.