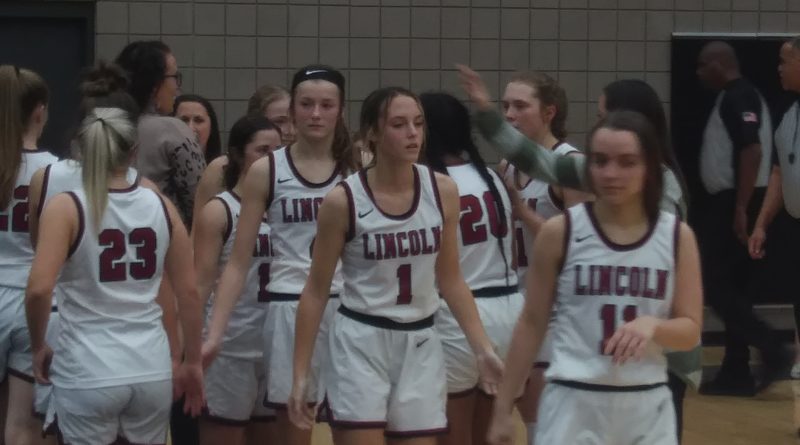 She added to that point total Friday.

Brueggemann registered a game-high 20 points, and also made five 3-point baskets, to lift the Lady Bulldogs past Stilwell, 56-33, in the semifinals of the Lincoln Christian Winter Classic.

“I thought I did pretty good; shots were falling in the first half and in the second half,” Brueggemann said. “I thought it was pretty good.”

Brueggemann had four of her five treys by halftime. She also had two treys in the final minute of the half, as Lincoln – which led 16-14 after the opening quarter – extended its lead to 18, 33-15.

“They were falling from the outside, so it was good,” Brueggemann said. “There were also a few of them in a row there, too, like three or four in a row in the second quarter, so it was good.”

Lincoln also got a boost from senior guard Lexi Murphy, who hit four 3’s to finish with 12 points. Three of those treys came in the opening quarter.

“Lexi was super-hot coming out of the gate and she just does a good job of finding herself in a good spot, and when they help down in off of her, it makes it really good for us when she knocks down shots,” Lady Bulldog coach Melody Stewart said.

It was the second time LC defeated the Lady Indians, having beaten Stilwell last month at the Vinita Tournament, 51-47.

“I thought our kids came out against a team that we knew was gunning for us and a team that is very, very good in the state of Oklahoma, so I was proud of our kids,” Stewart said.

“I feel like our kids did their jobs, to execute what we asked them to do. We were trying to get some mismatches in the post area, and I think we kind of capitalized on that a few times and tried to move Ellie around a little bit.”

Brueggemann got her 1,000th career point Thursday night when the Lady Bulldogs won their opening-round game against Fort Gibson, 62-46. Fort Gibson was a last-second substitution for Tulsa East Central, which had to withdraw from the tournament due to issues related to COVID-19.

“It’s incredible, and I also couldn’t have done it without my teammates and coaches pushing me throughout the game and helping me get there, but it was a great feeling, it’s awesome,” Brueggemann said.

The Lady Bulldogs reached the title game of last week’s Tournament of Champions at the BOK Center, but were manhandled by Bixby. But that loss only made LC even tougher, according to Stewart.

“I was telling our coaches before the game, the difference in us is the Tournament of Champions and what it did for us, just physically how we have to physically overcome some really, really tough opponents that I feel like prepared us to be better (Friday) than we were when we met them in December,” she said.

“I also feel like just in of itself, mentally as coaches and our team, we had to grow to figure out how to score against more athletic, more longer kids that can jump a little bit. It was good for us to have to learn to score against that kind of (team).”

In Friday’s win, the Lady Bulldogs also got 14 points from Audrey Hopkins, a freshman forward.

LC now will have a chance to play for another tournament title on Saturday night, as the Lady Bulldogs take on Sapulpa, which beat Collinsville in Friday’s other semifinal.

“We’re going to have to do our job to contain and keep them off of the boards, but I know I trust our coaches, I trust our game planning and they do a good job of scouting and getting us good reports to prepare our kids,” Stewart said.

“We’re excited about the matchup; we’re excited to get another good opponent on our schedule this season.”

Stilwell (8-2) was led in scoring by Snowda Watie, a sophomore who finished with 10 points. The Lady Indians will face Collinsville Saturday afternoon in the third-place game.

The Lady Chieftains hit eight 3-pointers as they were in control for most of Friday’s semifinal.

Sapulpa (6-2) had three of those treys in the opening quarter in building a 25-10 advantage. Then, the Lady Chieftains extended it to 37-18 at the half.

“I really liked the ball movement; that’s something we really talked about and we really haven’t played against a zone all that much and we tend to get impatient,” Sapulpa coach Darlean Calip said.

“But I thought we did a nice job of moving the ball around because we really have some good shooters, so it was nice to get them involved in the offense and to just space our offense out and be tougher to guard for opposing teams.”

Sapulpa had three players in double figures, with junior guard Stailee Heard leading the way with 24 points, half of those coming in the opening quarter.

Collinsville (6-4) got 17 points from sophomore Brie Smith and 11 from junior Abbey Stamper, who also made three treys.