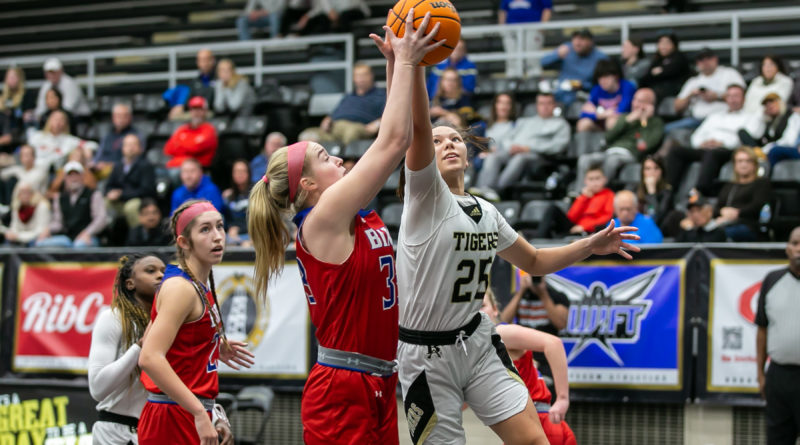 The Lady Spartans did just that on Tuesday, never trailing in their road test at Broken Arrow. Bixby built a 13-point halftime lead, and after the Lady Tigers got within four, made some clutch plays in the final minutes to grab a 39-29 win.

“I thought the girls showed some poise and made some big-time free throws when we needed to,” Bixby coach Tina Thomas said. “We did the little things that we needed to do to pull off the win when things got really tight.”

The Lady Spartans also got a big game from Meredith Mayes, a 6-foot-3 junior forward who was a co-MVP in last week’s Tournament of Champions in Tulsa along with teammate Gracy Wernli.

Mayes had a huge second quarter in helping Bixby get its 13-point lead by halftime. But she was more important to the Lady Spartans down the stretch.

With Bixby (7-2) hanging on to a 33-29 lead with more than three minutes left, Mayes retreated away from the basket to block a potential BA 3-point shot. Seconds later, on the other end, Mayes took a feed from Wernli for a finishing basket, putting the Lady Spartans up by six.

Mayes then came up with a strip in the paint. After a missed shot by Bixby, Mayes grabbed the offensive board and drew a foul with 1:24 remaining, sending her to the free-throw line.

She proceeded to knock down both foul shots, making it 37-29 in Bixby’s favor.

Mayes also had her team’s final points, taking another pass from Wernli for the finish, while grabbing a pair of defensive boards in the last minute of play.

On the night, Mayes had a team-high 14 points along with nine rebounds and five blocks.

“[ can do it all,” Thomas said. “I was tremendously proud of her also (Tuesday); I thought she did great defensively.”

In Tuesday’s rematch, Jones was held to nine points. Thomas credited her team’s defense for being able to keep Jones in check, with Wernli having drawn the assignment to guard Jones.

“I also thought (junior point guard) Gentry (Baldwin) did a really good job on (Lady Tiger freshman McKenzie Mathurin). We’ve been watching her and she was good in eighth grade, very dominating and she’s going to get better.”

Mayes pointed out another difference in the Lady Spartans’ first game against BA was that Wernli was injured in that contest.

“I think a big factor was we didn’t have Gracy because she got hurt halfway through and she brings a lot of intensity and our bench energy was really good this game, and that carries over onto the court,” Mayes said.

With Bixby up 11-7 after one quarter, Mayes and junior center Alyssa Nielsen accounted for all 14 of the Lady Spartans’ second-quarter points as they built a 25-12 advantage at the half.

BA got within three early in the fourth quarter and was down by four, 33-29, when junior Grace Pippett hit a 3 with 4:13 left. But the Lady Spartans, and Mayes in particular, rose to the occasion.

“I like how we can take our win in a good way, but not like get in over our heads on it. … I’m just really proud of everyone; I think everyone really put into something in the game,” Mayes said.

Both teams will be involved in tournament action beginning on Thursday. Bixby goes to the Putnam City Invitational, while Broken Arrow travels to the Bartlesville Tournament.

In the two losses suffered by the Tigers earlier this season, each came by one point.

Tuesday, it appeared to be another tough finish as Broken Arrow was taken to the wire by Bixby. But the Tigers ended the game with a 9-0 run to finally pull away from the Spartans.

BA (6-2) had trailed 34-27 at halftime. So Tiger coach Beau Wallace wanted to make some adjustments at the break, both strategically and mentally.

“I don’t think we competed in the first half; I thought they wanted to beat us more than we wanted to beat them, and that was the challenge at halftime. Some of our seniors kind of got into the guys a little bit, but our challenge was just to guard, and then we kind of changed the way we were guarding.

“We were really trying to double Parker (Friedrichsen, Bixby’s 6-3 junior standout) every time he touched the ball, and it was really killing us. They were hitting the guy open in the middle and he was making shots, so we changed that up to where we weren’t doing that every possession, and our kids just got stops; then all of a sudden, the ball just started dropping.”

The Tigers rallied to go in front during the third quarter. With the score tied at 48, BA senior Anthony Allen scored five straight points, including a 3 to beat the buzzer as the Tigers went into the fourth with a 53-48 advantage.

Broken Arrow stretched it out to eight at the outset of the fourth, but the Spartans (1-5) continued to push. They cut the margin to two, 62-60, with three minutes left when Friedrichsen hit a 3.

But it was all Tigers after that, beginning when 6-5 junior forward Ethan Ellison received a pass down low for a finishing shot.

“At halftime, (Wallace) just told us we needed to figure some things out as a team, (like) rebound better. … I was just trying to rebound the best I could. That’s kind of my role on the team, I try to get rebounds, I try to create offense for everybody, try to make sure everyone’s included, and then just win as a team.”

Seconds after Ellison’s basket, coming out of a time out, freshman guard David Howell telegraphed an inbounds pass and came up with the steal. He was fouled underneath the basket, but made both free throws for a 66-60 lead with 1:42 left.

Bixby missed a shot on the other end, and BA senior Aaron Johnson saved the ball going out of bounds, throwing it to a teammate. That set up the clinching basket, a 3 from the right wing by junior guard Connor Dow.

It was Dow’s fifth and final 3-pointer on the night, and all five came after halftime.

“I told Connor, he missed some shots early and then kind of hesitated to shoot the ball,” Wallace said. “Our scouting report was, we were going to go inside and make them have to guard us, so I think our guys kind of focused on that and didn’t take their shot.

“(Dow) is one of the best shooters in the state in my opinion, and we told him, ‘Hey, you get a free shot, let it go,’ and he kind of opened it up, started it with a defensive possession and then really proud of our freshman, David Howell; just kind of played solid for us and made plays, got into the post, rebounded the ball, so just guys stepped up.”

Howell capped the scoring with a basket in the closing seconds.

“I was proud that we closed out a game, because I don’t think we did that very well against Bartlesville last time we were at home,” Wallace said.

Allen had 17 points as four Tigers hit double figures. He had 11 of those in the third quarter.

“I don’t think it’s normal for most teams (having several players in double figures), but for us, we’ve got a lot of guys that can step up,” Ellison said. “We’ve got a lot of depth, so for us as a team, I think that will be normal throughout the season.”

Friedrichsen led all scorers with 20 points, 16 in the second half. He also made three 3’s. Bixby also got 15 points from freshman Tristan Driver, who made four 3’s, along with 12 points from sophomore Sam McCormick.

The Tigers are off until Jan. 11 when they travel to Sand Springs. Bixby will take part in the Bartlesville Tournament starting Thursday.

One thought on “Bixby girls continue recent roll with win at Broken Arrow; Broken Arrow boys pull away from Bixby with late run”