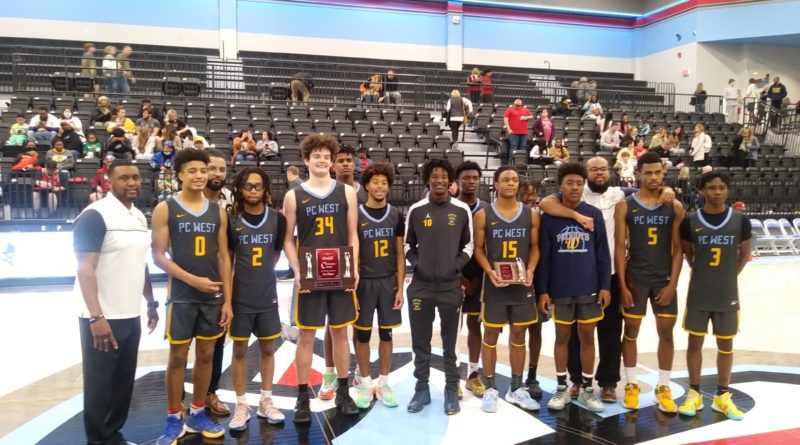 FORT SMITH, Ark. — Putnam City West did something, especially in the second quarter, that even took the Patriots’ coach by surprise.

That happened to be converting a vast array of 3-point baskets.

The Patriots made six 3’s in the second quarter in opening up a big lead in the title game of the Coca-Cola Classic at Southside High School. PCW ended up making 12 3’s as the Patriots claimed the championship with a 73-59 win against Fort Smith Northside.

“I think the thing is, I don’t think we made more than four 3’s in a game. … We haven’t made many, but we work on practicing shooting them all the time, we just haven’t made many,” Patriot coach Lenny Bert said.

“We also got one of our guys back, Jaden Constant, who’s a sophomore. He came in and really set the tone shooting the ball, and it was kind of contagious with Jacob Blount and Jordan (Warrior), he just runs the show. … When he’s making shots, it’s definitely easy for us.”

The Patriots were up 12-11 after one quarter. They started the second quarter with back-to-back 3’s, from Carlsheon Young and Warrior.

Constant later hit two treys of his own that quarter, and senior JaJuan Moore hit a 3 from the corner as time was running out in the first half, extending PC West’s lead to 13 at the half, 34-21.

“With the offense we’ve got, you penetrate and you kick, you’re always going to get the open shot, because we’ve got players who can just get a bucket,” said Warrior, a 6-foot sophomore guard.

“So everybody’s got to help and just make the extra pass, and if you’re wide open, you’ve got to knock the shot down and hope it goes in.”

The Patriots’ prowess from beyond the arc didn’t stop there.

After the Grizzlies cut PC West’s lead to nine, Warrior hit a 3 before the 35-second shot clock that was used for the tournament expired. That ignited an 18-2 run as the Patriots’ lead grew to 25 points, 54-29.

Then another 3, this from Orian Scales, gave PC West its largest advantage at 26 points late in the third, as the Patriots went up 60-34.

“Our game going into halftime was keep the momentum, keep the pressure, so we just picked up full court and trapped and they just ended up turning the ball over and we got open layups to increase the score,” Warrior said.

But Northside began making things interesting in front of a crowd predominantly rooting for the Grizzlies. They got within seven, 66-59, with three minutes left.

PC West, however, withstood the final wave, as the Patriots forced several key turnovers and a pair of clutch baskets. That included a dunk from senior Corey Gordon for a 71-59 advantage entering the final minute.

“I think our team kind of relaxed a little bit and we subbed,” Bert said. “We’re used to playing nine to 10 guys anyway, and I think we just got complacent and (Northside coach Eric Burnett) did a good job just running guys in, and all of sudden, he came back with his horses and they cut it down to seven points. … We stood the test, though.

“This part of the year, you want to try to continue to get better, in December and early January, so we did what we had to do.”

Scales and Young, a freshman, each had 15 points for the Patriots. The two also combined to go 5-of-5 from 3-point range.

Warrior added 14 points on 5-of-10 shooting, including a pair of 3’s. He was named the tournament’s MVP.

“To be MVP, it feels great to know that I helped my team win the game and do whatever I can to help my team,” Warrior said. “All my teammates, they pushed me to be the best I could be and helped me on the court right here and got us the win.”

Bert also hopes the Coca-Cola Classic title helps vault the Patriots (9-1) into the No. 1 spot in Class 6A when the statewide rankings are released on Monday. Currently ranked No. 3, the Patriots’ only defeat was to Tulsa Memorial.

“We had one loss to Tulsa Memorial, which they’re 5A, and we beat Del City twice this year and we’ve beat Owasso,” Bert said.

“We’re number three in the state, but I don’t know if it means anything, but we may potentially be number one when the rankings come out Monday; I don’t see why we wouldn’t, with our strength of schedule and whatnot.”

The Patriots return to action Tuesday with a road game at Choctaw.