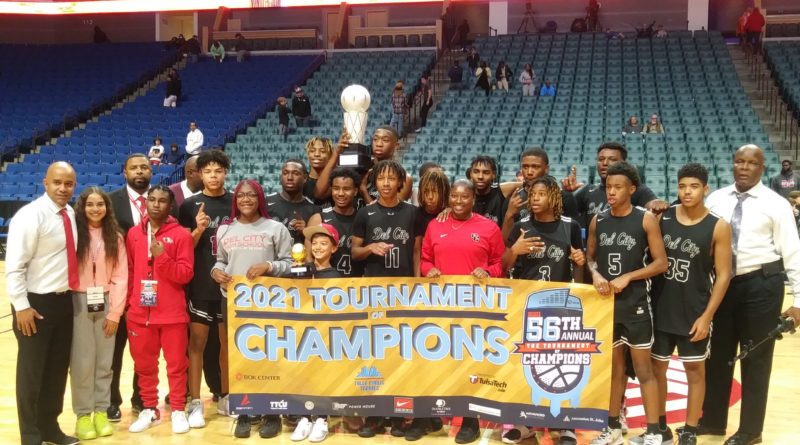 TULSA — Del City was on the verge of being run out of the BOK Center.

But instead of being delivered an early knockout punch, the Eagles jumped up off the canvas and applied some jabs of their own.

Del City rallied to tie the score early in the fourth quarter before taking its first lead. The Eagles then ended the game with a 12-2 run to hand the Chargers their first defeat, 59-49.

“At the start, I didn’t know how it was going to go, I’m going to tell you right now,” Del City coach Lenny Hatchett said. “It was ugly; we didn’t play any type of defense.”

However, the Eagles – who also trailed 20-5 after one quarter – gradually chipped away and cut their deficit to eight at halftime, 30-22. That allowed Hatchett to offer some encouragement to his team in the locker room between halves.

“I just told them at half, I said, ‘Guys, if we can go in at half at least down in single digits, we can come out here and compete and maybe give ourselves a chance to win,’ and that’s exactly what we did,” Hatchett said.

“Those guys executed, those are the players and they did their job.”

The Eagles (6-3) scored the first four points of the final quarter to finally seize their first lead on the night.

Both teams then dueled for that lead. With less than four minutes left, the score was tied at 47-all.

Del City regained a two-point lead on two free throws from junior forward Terry McMorris. The Eagles then built a 53-47 advantage with less than two minutes left after junior guard Jaedon Foreman drove the right baseline for a finishing basket.

He scored the Eagles’ next five points as Del City ended the game on a 6-0 run. Garrison also had a key block, one of his four on the night, and a pair of rebounds.

“I started off slow,” Garrison said. “I came in the locker room and coach talked to me and told me I had to come out and show it, so the second half, I had to turn it up.”

And despite the shocking 15-point hole early on, the Eagles believed they were going to dig themselves out of it.

“Yes, we just had to overcome the adversity in the middle of the game, so we had to turn it around and make a big comeback,” Foreman said.

“It was just our communication and how hard we play. We just kept fighting, and came back with the victory.”

Held to 32 percent shooting in the first half, the Eagles went 50 percent from the field after halftime (11-of-22). They also gave up eight second-half baskets, all of them the two-point variety.

“The good thing about these kids is they’re juniors,” Hatchett said. “They’re still so green and they’re still learning and everybody kind of takes it for granted just because they’re 6-9, 6-6, that they can automatically play and they’ve got a lot of ability.

“We’re just glad they’re with Del City and we’re just proud of the way they work and they’re coachable.”

McMorris scored 19 points and grabbed 14 rebounds, part of a 38-25 edge on the glass. Foreman had a double-double of his own with 11 points and 10 boards.

Foreman was also in double figures with 15 points.

A basket from Seth Wilkins with 5.9 seconds remaining broke a 56-all score as the Trojans held on to capture third place in the tournament.

Wilkins received a pass from teammate Ben Averitt for the game-winning shot. A last-chance 3 from Owasso landed over the backboard as time expired.

Averitt finished with 17 points while Chase Martin had 13 for the Trojans.

The Knights overcame a half-court shot to end the first half as they built a 44-35 lead after three quarters in Wednesday’s fifth-place contest.

Cal Furnish had 21 points to lead the Knights. For the Conquerors, Joshua Udoumoh had a double-double of 23 points and 11 rebounds. It was also his half-court shot to end the first half, which cut Crossings’ lead to four, 30-26.

The Bobcats survived in Wednesday’s seventh-place game as a potential game-tying shot from Cashion was waved off after the buzzer sounded.

Hydro-Eakly did get a buzzer-beater that turned out to be the decisive play, when Kolsen Tharp ended the third quarter by making a shot from half-court. That gave the Bobcats a 38-36 advantage.

Carson Propps had 16 points to pace Hydro-Eakly, with Paxton Price adding 12 and Tharp 11, which included a pair of 3’s.