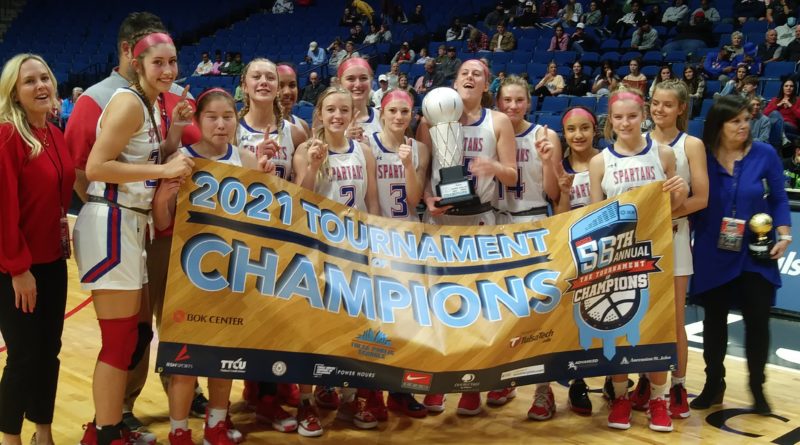 TULSA — Bixby shot at least 56 percent from the field in both halves of Wednesday night’s Tournament of Champions girls title game.

While the Lady Spartans were getting things done on offense, it was really their defense that spearheaded a decisive win.

Bixby held a strong outside-shooting team in Lincoln Christian to just five 3-pointers as the Lady Spartans took control in the second quarter as they won the championship, 56-31, at the BOK Center.

“We tried to limit their 3-pointers as much as possible,” Lady Spartan junior center Alyssa Nielsen said. “They’ve got a lot of 3-point weapons, and we just did our best to shut them down and we rebounded well.

“Our defense really stepped up this tournament from what it was last year, and we just played as a team and won as a team.”

Indeed, avoiding the potential barrage of treys was foremost on the mind of Bixby coach Tina Thomas entering Wednesday’s tilt.

“They just really listen in,” Thomas said. “We have goals and goal number four was don’t let them get an uncontested 3 off. That was our mission and the girls just locked in.

“(Lincoln Christian) made a couple of 3’s, but they were contesting them. … That was our agenda, to contest every 3.”

“We pounce on defense all the time,” Thomas said. “I grade them and make them run and all this for all little technique stuff. But what I think I’m most proud is that we didn’t do everything our standard way, but they’re really adaptable to whatever philosophy that we chose to employ, so they’re very adaptable.”

Meanwhile, the Lady Spartan offense was clicking on all cylinders with their potent blend of outside shooting and inside presence.

Bixby took control after trailing 6-2 early on, ending the first quarter with a 9-0 run to go in front, 11-6. Junior guard Gentry Baldwin then started the second quarter by hitting a 3.

The Lady Bulldogs got within six, 18-12, on the aforementioned bank-shot 3, courtesy of Adyson Roberts. But a 6-0 Bixby run allowed the Lady Spartans to double up on Lincoln, 24-12, going into the half.

Mere seconds into the latter half, junior guard Gracy Wernli knocked down a 3 of her own, finishing off a 25-6 run for the Lady Spartans.

Up 37-24 through three, Bixby scored consecutive baskets to start the fourth; the latter when sophomore forward Brynn Daniel was all alone underneath the goal to grab a missed shot. Daniel then put it back in through the net, a symbolic metaphor for the good fortune the Lady Spartans had going for them.

Baldwin later hit a deep 3 with more than three minutes left, an exclamation point of a shot as Bixby’s lead grew to 23 points, 50-27.

“It felt good; I had struggled the last two games, so this game felt good to just let it fly,” said Baldwin, who had 13 points, one of four Bixby players in double figures.

Nielsen was the team’s top scorer with 14 points, followed by Baldwin and Wernli with 13 each. Meredith Mayes, a junior forward, had a double-double of 12 points and 11 rebounds.

“We’ve got a really good balance; that’s what’s the beauty of this group because we’ve got a strong outside presence and a really strong inside presence and very unselfish kids that are willing to share the ball and pass it to their teammates,” Thomas said.

Bixby outrebounded Lincoln, 27-14, and the Spartans outscored the Lady Bulldogs in the paint, 32-14.

“It was really all about teamwork; we worked together, we communicated a lot on defense and everything was just falling for us,” Baldwin said. “It just felt natural (Wednesday) and it felt good to win.

Lincoln Christian’s Ellie Brueggeman led all scorers with 15 points, and she made three 3’s. Roberts had 11 points as well.

The Lady Tigers lost Tuesday’s semifinal in the closing seconds. In Wednesday’s third-place game, they found a way to win late.

Norman also rallied from a 38-29 halftime deficit, and was also down by 10 early in the second half.

Aaliyah Henderson had 24 points and 10 rebounds for the Lady Tigers, with Rollins adding 15 points. For the Dutch, Kalayia Johnson ended up scoring 18 points.

Shiloh Fletcher’s buzzer-beating jumper capped a wild ending as the Lady Lions took fifth place in the Tournament of Champions.

With 10 seconds left, Seiling had taken a 48-47 lead on a jumper from Kenley Gore. But the Lady Lions had the last shot, and Fletcher’s attempt was true.

Kalan Nye had 19 points to lead the Lady Lions, who rallied from a 27-19 halftime deficit. Gore led Seiling with 18 points.

A pair of free throws from Smalls Goudeau with five seconds left were the difference as the Lady Tigers prevailed in Wednesday’s seventh-place game.

For the Lady Hornets, Aunisty Smith and Marcayla Johnson had 16 and 15 points, respectively.