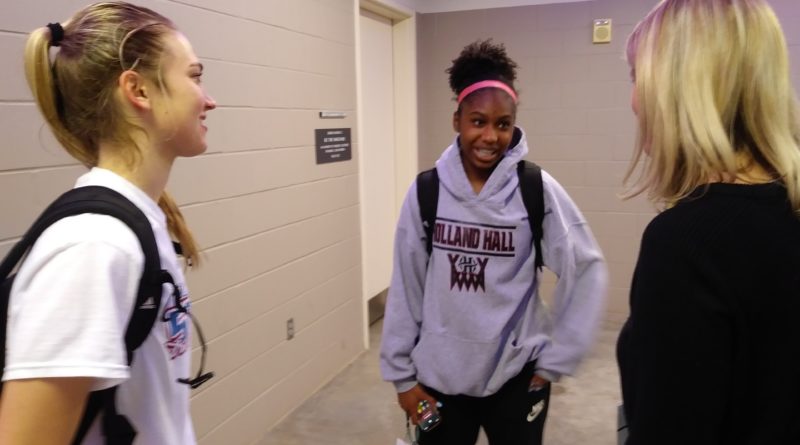 TULSA — Holland Hall coach Crystal Lawson and her players noted it’s not uncommon to have balanced scoring on any given night.

Monday night, that was quite evident in a matchup between two undefeated teams in the opening round of the 56th annual Tournament of Champions.

Four players reached double figures as the Dutch led from start to finish in a 61-53 win against Tahlequah at the BOK Center.

“Yes, we like to share the ball and you can’t focus on one player on our team because pretty much everybody can score and do what they do,” said junior guard Elise Hill, who was one of the Dutch co-leaders in scoring with 15 points.

Lawson also likes having her players share the wealth when it comes to putting up points on the scoreboard.

“I really feel confident with all five girls being able to step up on any night, and we prefer to have balanced scoring,” Lawson said.

“Elise sometimes has had games where she’s been high point, but overall on any night, any one of them can be the high point. But I personally prefer when we’re a little more balanced.”

The Dutch (7-0) scored the game’s first seven points; then a 3-pointer from Ava Greer extended the lead to 10-2. Soon, it became a 10-point advantage, 14-4, as Hill converted a putback shot off an offensive rebound.

Tahlequah got within five points (18-13) to end the first quarter and trailed by three (22-19) near the midway point of the second. Holland Hall then ended the half with a 6-0 run to take a 28-19 advantage at the break.

The Lady Tigers (7-1) still trailed by nine three minutes into the second half before Holland Hall went on a 11-4 run to make the lead 16 points, 48-32. That spurt featured 3’s from Hill and Sophia Regalado.

Tahlequah, though, kept hanging around.

A three-point play from Jadyn Buttery cut the Dutch lead to seven, 52-45, with 4:51 left. Then with more than three minutes left, a basket from Lily Couch made it a five-point game, 55-50.

Tahlequah had a chance to cut it to four with more than a minute to go, but Greer blocked a shot, giving the Dutch possession. Holland Hall then clinched the win at the foul line, making four free throws over the final 1:04.

“I think we started out pretty consistent and we were making our shots off the bat, we were hustling, we were getting defensive plays,” said Greer, a senior.

“I think towards the middle of the game, we started to kind of lose focus. … But at the end of the game, we kind of pulled it together and just wanted to keep the score ahead.”

Greer added 13 points on 6-of-11 shooting, while Regalado rounded out the four Dutch players in double figures with 10.

Tahlequah’s top scorer was Smalls Goudeau, who had 14 points. She also had a double-double with 12 rebounds.

With the win, Holland Hall moves on to Tuesday’s semifinals, set for 7 p.m. The Dutch will play Bixby, which beat Seiling in its opening-round game Monday.

“They’re tough; that’s going to be a real tough game,” Lawson said. “We’re pretty familiar with them just through scrimmaging and Kalayia plays with a lot of their girls, so that will be a tough one.”

Caden Fry and Caleb Leslie combined for 40 points as the Rams pulled away from the Conquerors in Monday’s opening round.

“We’re still trying to find out what our identity is, but I like the ballclub; I like how they play,” Owasso coach Brian Montonati said. “(Monday) we had eight or nine guys in double figures in minutes.

“I think a lot of the guys are stepping up and understanding their role.”

Owasso broke a 20-all score in the second quarter by hitting three consecutive 3-pointers. The Rams’ Wendell Mann then made a reverse layup with time running out in the first half as Owasso led at the break, 33-24.

But Victory Christian made things interesting in the third quarter, getting within a point, 38-37, as standout senior guard Joshua Udoumoh got a steal and went down the court for a finishing dunk.

Owasso (5-1), however, ended the third quarter with a 5-0 run and then was able to extend its lead in the fourth. Inside the final minute, a 3-pointer from Isaiah McLemore gave the Rams a 15-point margin, 62-47.

“But I loved the way our team responded; I thought we played pretty well defensively. We challenged them a little bit more at halftime about getting a little bit more rebounds, so we were a lot more physical in the second half and everything paid off for us.”

“We’re going to go as Caden goes; Caden’s our best player,” Montonati said. “He’s physical, he’s a post presence that demands a double-team and when he’s playing the way he was (Monday), it opens things up for our shooters.

“Caleb got loose a couple of times and we were able to run some sets that put Caden in the post and bring Caleb off the weak side. So when those guys are going like that, and we’re playing defense the way we were, I think we’re a pretty good team.”

Udoumoh and senior post Luke Patton each had 14 points and the two combined to grab 17 rebounds. Udoumoh was also 4-of-4 from the free-throw line.

Owasso now gets set to take on Tulsa Memorial in a semifinal set for 8:30 p.m. Tuesday. Memorial defeated Hydro-Eakly in its first-round game.

“Memorial, in my opinion, is the best team in the state of Oklahoma regardless of class,” Montonati said. “They’ve got a ton of athletes.

“They like to get out and run, it’s going to be a track meet, so we’re going to have to try to slow them down a little bit. … Every year, it seems like they just reload; they don’t rebuild, so it’s going to be challenging for us but we’re looking forward to the opportunity.”

Three players were in double figures as the Lady Bulldogs outscored Booker T. Washington in all four quarters.

Lincoln Christian, which led 14-8 after one quarter and 31-19 at halftime, was led by 19 points from Ellie Brueggemann, who made all five of her 3-point attempts as the Lady Bulldogs went 58 percent from 3-point range (11-of-19). In addition, she got a double-double by grabbing 10 rebounds.

Lexi Murphy added 12 points, all coming courtesy of four 3’s, for Lincoln. Audrey Hopkins also had 12 points, going a perfect 6-of-6 from the free-throw line.

The Lady Bulldogs will take on Norman in the semifinals at 4 p.m. Tuesday.

Marcayla Johnson had 12 points, also going 6-of-6 from the line, and Carrigan Hill 10 points for the Lady Hornets.

– The Lady Spartans converted 54 percent of their field goals (28-of-52) en route to the opening-round Tournament of Champions win.

Bixby also used a big second quarter to pull away. Leading by only one entering the quarter (10-9), the Lady Spartans posted a 25-2 edge to build a 35-11 lead at the break.

Gracy Wernli had 19 points and made 7-of-11 field goals for Bixby.

She was one of four Lady Spartans in double figures. Meredith Mayes added 14 points on 7-of-8 shooting along with 13 rebounds, and Alyssa Nielsen had a double-double of 12 points and 12 boards.

Gentry Baldwin rounded out the Lady Spartans in double figures with 11 points.

– The Lady Tigers built a 24-7 edge after the first quarter in Monday’s opening-round game.

Nessa Begay scored 17 points and was 6-of-10 from the field for Norman. Also for the Lady Tigers, Aaliyah Henderson had a double-double of 16 points and 10 rebounds.