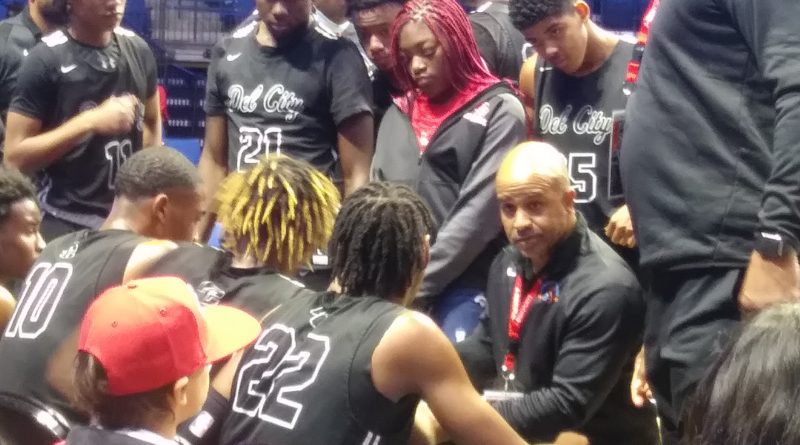 So, McMorris instinctively went to the left corner in hopes of being seen by Green.

In the nick of time, Green was able to spot McMorris, who did the rest, driving the baseline for a finishing dunk with 25 seconds left to break an overtime deadlock. The Eagles were able to hold on for a riveting 67-65 win against the Trojans in the semifinals of the Tournament of Champions on Tuesday evening at the BOK Center.

“I’ve got to help, so I went to the outside of the court,” McMorris said. “He passed it, and I dunked it.

The Eagles (5-3) then made the stop on the other end as Jenks missed a pair of shots near the basket as time expired.

“I think we got some key turnovers; we got a couple of steals that were crucial. … There were some huge calls on both sides that really turned that game and (Jenks is) a tough ball club; they play hard, they run their stuff and they’re hard to defend,” Del City coach Lenny Hatchett said.

“I was just so proud of our guys for the way we came out here and competed.”

McMorris’ dunk capped an extremely sensational fourth quarter and overtime for both teams.

Del City had erased a seven-point deficit early in the second half to take a 48-46 lead entering the fourth. Jenks (6-1) came back to regain the lead, and went up by five near the midway point of the quarter.

But the Eagles went back in front, 60-59, on a 3-pointer from Green with 1:25 left in regulation. They took a two-point lead before the Trojans tied it up with 14 seconds left on a put-back shot from Chase Martin.

Del City had the last shot in regulation, but a 3-pointer glanced off the left side of the rim.

Then in overtime, there were two tie scores, the latter 65-all on a jumper from Ben Averitt with more than a minute left.

But the Eagles were able to come away with the win, thanks in large part to Green escaping the double team and finding McMorris for the finishing slam.

“Huge finish by Terry; you know, he can finish those,” Hatchett said. “That’s what he likes to do.

“I know there was a couple he left off the backboard that I know that I wish he had had and maybe it doesn’t go into overtime, but that young man, he’s coachable, he wants to work hard and I’m so proud of him for hitting that shot right there because I know that’s going to boost his confidence.”

The Eagles were also able to keep playing together to withstand Jenks’ early second-half surge.

“We were tied up at 30-30 at halftime, and I told our guys it didn’t matter what was going on, we were going to stick together with this group,” Hatchett said. “Then these guys were out there and they fought together, they believed in each other, our bench was engaged, which is extremely important.

McMorris also chalked up the win to the Eagles’ pregame preparation.

“We had a great walk-through, we were able to do everything that we could do and we executed,” he said.

“We shared the ball and got less turnovers. We’ve had a lot of turnovers in the past couple of games, but we eliminated those. We stopped those turnovers and we were finishing.”

Four Eagles were in double figures, all underclassmen, led by junior Jaedon Foreman’s 20 points. He also made three 3’s.

Green, another junior, had 15 points while McMorris had 14. Brandon Garrison, also a junior, finished with a double-double, getting 10 points and 10 rebounds.

Averitt led all scorers with 21 points. He also had nine boards and made two 3’s. Martin had 13 points as well for Jenks.

For 29 minutes, both the Chargers and Rams were matching big play after big play.

But over the last three minutes, Memorial took control, ending the game with a 10-2 run after the score was even at 56-all.

Memorial (13-0) broke the deadlock with 2:29 left on a foul shot from Killian Spellman. Senior point guard Ty Frierson then came up with four big points in a span of less than 30 seconds, the latter a high floater from short range with 1:14 left for a 61-58 advantage.

The Chargers then got some big defensive rebounds, and iced the win at the foul line, going 5-of-6 in the final minute.

Four Memorial players were in double figures, with senior forward Bradyn Hubbard getting a double-double with 19 points and 11 rebounds. Pratt added 15 points, making three 3’s and going 6-of-6 from the line, Frierson had 13 points and was 7-of-8 from the line and Spellman had 12 points as well.

Rams’ senior forward Caden Fry led all scorers with 27 points. He was 11-of-20 from the field and 5-of-6 from the line, and almost had a double-double as Fry grabbed nine boards.

Owasso (5-2) put together a dominant first quarter, taking an 18-9 lead as Zane Harbaugh ended the period with a putback shot. But Memorial stormed back in the second quarter, tying the score at 23-all on a 3 from Seth Pratt; then went in front moments later on a 3 from Jarreth Ingram.

The Rams regained momentum to take a 31-28 lead at halftime. It remained back-and-forth through the third quarter, which Pratt ended with another 3 as Memorial was on top again, 46-44.

With 3:03 left, two free throws from Harbaugh tied the score at 56-all before Memorial methodically pulled away.

A 25-foot jumper from Cal Furnish with one second remaining lifted Crossings Christian to the win in Tuesday’s consolation-round semifinal.

The Knights will play Victory Christian for fifth place on Wednesday.

Furnish was the lone Knight in double figures in Tuesday’s win with 14 points, making four 3’s.

Cashion, which plays Hydro-Eakly for seventh place Wednesday, got 18 points from Jonah Jenkins and 15 from Vance Raney, and the two combined to make five 3’s.

Behind 27 points from Joshua Udoumoh, the Conquerors were able to roll past Hydro-Eakly in the consolation semifinals.

Udoumoh went 12-of-20 from the field and made two 3-pointers while grabbing eight rebounds. Jude Malhi added 10 points and two 3’s for Victory, which shot 50 percent from the field.