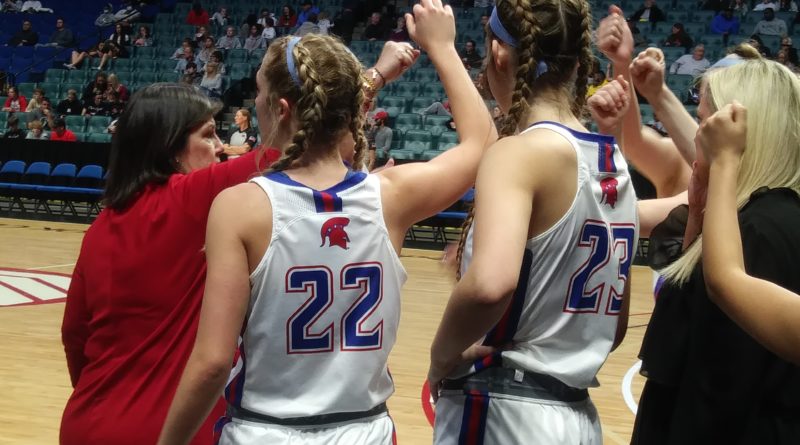 TULSA — Bixby grabbed a big halftime lead in Tuesday’s girls semifinals of the Tournament of Champions.

Mindful of a similar situation in Tuesday’s other semifinal, when Norman led by double digits at halftime but ended up falling to Lincoln Christian, Lady Spartans coach Tina Thomas implored her team to keep their foot down on the gas pedal.

Though there were moments the Lady Spartans let their guard down, they still did more than enough to end up victorious. Junior Gracy Wernli tied a season-high with 20 points as Bixby led from start to finish in a 48-32 win at the BOK Center.

The Lady Spartans (5-2) return to the BOK Center on Wednesday to take on Lincoln Christian for the championship, with tip-off time set for 7 p.m.

Despite Tuesday’s win, Thomas said her team still has room to improve, especially with their second-half performance after building a decisive 28-7 halftime advantage.

“I thought our shot selection was poor the second half, which led to some transition buckets, but it’s December, we’re learning, we’re growing, we’re jelling and I expect them to bounce back and come in with some resolve (Wednesday),” Thomas said.

That will come against Lincoln Christian, which rallied from a 12-point halftime deficit to edge Norman in Tuesday’s other Tournament of Champions semifinal.

“They’re a great team and they’re well-coached,” Thomas said of the Lady Bulldogs.

“I have nothing but respect for (Lincoln Christian coach) Melody (Stewart) and their program, and I’ve watched them and they’re a very well-balanced, excellent team, so it should be a good matchup.”

Bixby scored the opening points Tuesday and maintained its lead, going up 11-4 after one quarter. The Lady Spartans then extended it to 21 points at the break, 28-7.

Holland Hall was able to cut that to 14 points (37-23) after three. But the Lady Spartans never let the Dutch (7-1) get on a big spurt in the final quarter.

Bixby put the wraps on things with more than two minutes left. Junior forward Meredith Mayes blocked a shot, and on the other end, Wernli was able to finish off a three-point play as Bixby led by 19 points, 46-27.

Defense was another reason Bixby was able to build a big halftime margin.

The Lady Spartans held the Dutch to 2-of-21 shooting in the opening half. In that same span, Bixby was 55 percent from the field, going 11-of-20.

“Our defense, that’s something we always stress and work on, and I thought the girls did a really good job containing the girls that we needed contained. … That’s just having coachable kids and just hard workers,” Thomas said.

“It’s just about effort there, and I thought they worked really hard for that.”

It was the second time this season Wernli had 20 points, also getting the number against Tulsa Booker T. Washington.

“There was no way I get that without our posts,” Wernli said. “That’s my favorite shot, that in-out; they do so good working down there, being able to put it up themselves and distribute when (opponents) double on them, so huge shout-out to our posts for that, too.

“I felt like the drives (to the basket), that was working good, and then whenever they were doubling down on those drives after we got it, our guards were moving to the open space and able to kick it out to them for them to hit that shot, too.”

Alyssa Nielsen, a junior center, added 17 points for Bixby on 8-of-12 shooting.

Ava Greer had 14 points to lead Holland Hall in scoring.

Norman seemed to be well in command after the defending 6A champion Lady Tigers led by 12 at halftime of Tuesday’s Tournament of Champions semifinal.

But Lincoln Christian had other ideas, and the Lady Bulldogs gradually chipped away at the lead before taking it late.

Then, after Norman rallied to tie the score in the closing seconds, Lincoln’s Alyson Roberts drew a foul with 0.3 left on the clock, sending her to the line.

Roberts proceeded to drill both free throws for the two-point lead, and a desperation 3-point shot from the Lady Tigers went off the mark.

The Lady Bulldogs (9-0) also used defense to fuel their comeback. After Norman shot 55 percent from the field in the first half (11-of-20), including 4-of-6 from 3-point range, Lincoln held the Lady Tigers to 38 percent in the second half, and Norman was unable to make a single trey in that span.

Lincoln also shot 67 percent from the field in the second half, going 12-of-18. The Lady Bulldogs also held the edge in rebounding, grabbing 27 boards to Norman’s 24.

Ellie Brueggemann had 17 points to lead the Lady Bulldogs. She added nine rebounds, three assists and made two 3’s.

Roberts ended up with 14 points and seven boards, hitting two 3’s and going 4-of-4 from the line. Audrey Hopkins was also in double figures for Lincoln with 10 points.

Norman’s Jordyn Rollins had 13 points, and the Lady Tigers (6-2) also got 10 points each from Jaki Rollins and Nessa Begay.

Braci Nyberg and Kenley Gore scored 25 points apiece to help pace the Lady Cats in their win in the consolation round. Seiling will face Howe for fifth place on Wednesday.

Jadyn Buttery had 10 points to lead the Lady Tigers, who will play Tulsa Booker T. Washington for seventh place.

The Lady Lions led 18-8 after one quarter and extended that lead to 15 points at halftime, 29-14, in their consolation-round win.

The Lady Hornets’ Aunisty Smith led all scorers with 19 points.