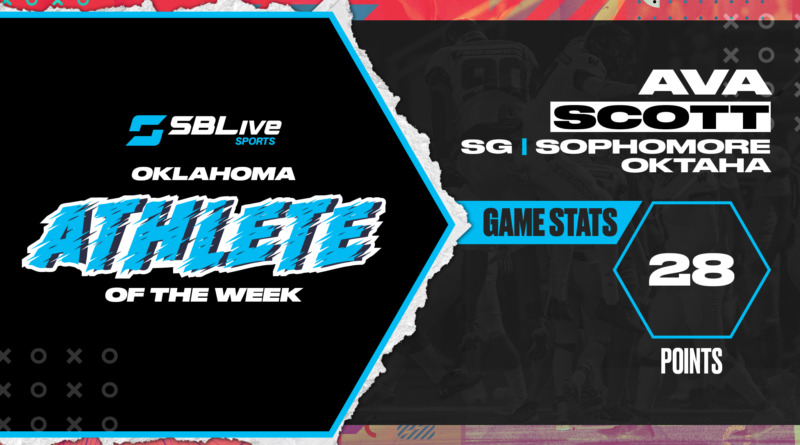 The sophomore scored 28 points in the Lady Tigers’ 61-46 win against Vian on Friday.

Ayyappan scored 17 points, including the go-ahead layup off a steal with more than a minute remaining, as the Bruins posted a 57-56 win Friday at highly ranked Broken Arrow.

Jones had 26 points, 11 coming in the first quarter, as the Lady Tigers registered a 58-51 win at home Friday against Bartlesville.

Gilyard scored 31 points as the Lady Bulldogs, who trailed by seven after three quarters, rallied for a 53-52 win in overtime against Lincoln Christian on Tuesday.

Moser had 18 points and grabbed five rebounds in the Timberwolves’ 59-41 win against crosstown rival Norman on Friday.

Armstead led all scorers with 20 points as the Lady Sandites recorded a 64-30 win at Jenks on Tuesday.

Martin had 15 points as the Trojans posted an 84-35 win at home on Tuesday against Sand Springs.

Thrailkill had 17 points in her team’s 52-33 win against Oklahoma Christian School on Thursday.

Rowan scored 13 points, including the go-ahead free throws in the final seconds, and also grabbed a defensive rebound as time expired in the Tigers’ 62-60 win Friday at Hilldale.

Whiteley, a freshman, totaled 19 points in the Lady Tigers’ 69-33 win at Hilldale on Friday.

Wright tallied 29 points as the Panthers recorded a 57-38 win against Canadian on Friday.

Cool finished with 22 points as the Dutch recorded a 60-43 win at Cascia Hall on Friday.

Stinchcomb had 19 points and was a perfect 10-of-10 from the free-throw line in the Lady Buffaloes’ 59-54 win Friday at Bishop Kelley.

Holiman finished with 39 points, 23 coming in the second half, and made three 3-pointers as the Buffaloes edged Bishop Kelley on Friday, 80-79.

Granderson scored 19 points as the Conquerors defeated 4A No. 1 ranked Heritage Hall on Friday, 67-41.

Hart scored 30 points, all coming on 10 3-point baskets over the first three quarters, in his team’s 88-20 win against Chattanooga on Thursday.

Ellison finished with 42 points, grabbed 15 rebounds and blocked seven shots in the Lady Rebels’ 64-53 win against Valliant on Friday.

Watie scored 17 points, and had the game-winning basket, in the Lady Rangers’ 41-40 win at Muldrow on Tuesday.

Martin had a double-double of 18 points and 10 rebounds as the Lady Diamonds defeated Poteau, 47-35, on Tuesday.

Blankenship had 16 points and grabbed eight rebounds in the Lady Bulldogs’ 49-34 win against Checotah.

Obregon had 17 points to lead the Black Diamonds in scoring in their 49-46 win against Poteau on Tuesday.

Parker had 62 points in the Lady Indians’ three games at the Choctaw Nation Invitational Tournament in Talihina, including 21 in the championship game Saturday as Pocola defeated Roland, 61-35.