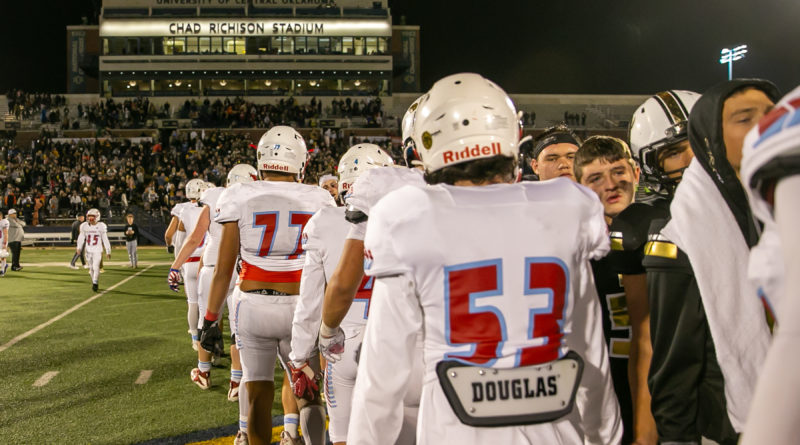 Two Decembers ago, I saw the very first Oklahoma high school football state championship game to be contested in Edmond.

On a cold, but sunny afternoon, I covered Poteau’s first football state title, as the Pirates survived Weatherford, 9-7, to take the 4A championship.

Little did we know then that a new tradition was about to be born.

Since then, Edmond has more than proven its worth as a host for the state football championship games. Earlier this month, football fans from across Oklahoma came back to Edmond for the third straight year to see seven state championship games, most of which turned out to be very compelling with a few down-to-the-wire finishes.

And for at least two more years, we’ll get to return to what is now Chad Richison Stadium on the University of Central Oklahoma campus to see more gold balls being awarded.

It’s not quite the iconic statewide institution that Oklahoma City’s State Fair Arena, a.k.a. “The Big House,” has become for small-school basketball players throughout the state. That’s something that has been ingrained for decades.

But Edmond is starting to become the place to be for football teams, at least on the 11-man level, from all corners of the state.

It’s centrally located, for one thing. Though where I live, it still takes me slightly over three hours and exactly 200 miles to get from my house to the parking lot at Chad Richison Stadium.

But once there, the facilities are superb, and they’re about to get even better with the millions of dollars in renovations being donated by Richison himself, a UCO alum and the founder of Paycom, which has its company logos adorning the scoreboard.

For instance, behind one end zone there is going to be a rock formation with a waterfall. Something tells me there will be some football teams that will want to pose for photos holding up the gold ball with the waterfall serving as a backdrop.

Of course, there will be more seating. But having the hill behind one end zone is a nice touch, with fans being able to sit there, and I hope that remains that way once the renovations are finally done.

Some other reasons that Edmond has proven to be a worthy host for the state title contests:

The sports information staff at UCO, led by director Chris Brannick, is on top of its game. In fact, during all seven title games I covered this month, I never had to worry about keeping stats, and that’s really something I love to do at a football game. The staff kept very detailed stats, and provided complete postgame books, the kind you would see while covering a game at the collegiate level.

Also, Van Shea Iven, the media relations director at the Oklahoma Secondary School Activities Association, is the best in the business. Helpful at every step of the way, and the media was well taken care of during the title contests. Not to mention being well fed.

Fans have also flocked to the games.

There were a bunch of people that came out for the opening game, the 6AII final, due in large part to wanting to see Bixby set the all-time 11-man state record for consecutive wins with 49. But the other title games were also well-attended, especially the two smaller-classification games on the second weekend.

It didn’t hurt that there was some unseasonably warm weather, particularly on the first couple of days of action there. I felt like going to the adjacent baseball and softball fields instead with the spring-like temperatures.

And having Oklahoma City right next door, with its countless things to see and do, has to be another plus, right?

Other nearby states have used one site as the ultimate destination for football teams.

In Texas, it’s “Jerry World,” AT&T Stadium in Arlington. For years in Arkansas, it’s been venerable War Memorial Stadium in Little Rock. Same in Louisiana, with the Superdome in New Orleans.

Maybe, in due time, Edmond can grow to become that place, that site where teams throughout the state dream of playing during off-season workouts in January, to spring practices in May and most certainly leading up to the season openers come August.

After seeing state title games being played at numerous stadiums in recent years, it’s good that Oklahoma high school football finally just might have a “Big House” to call its own.