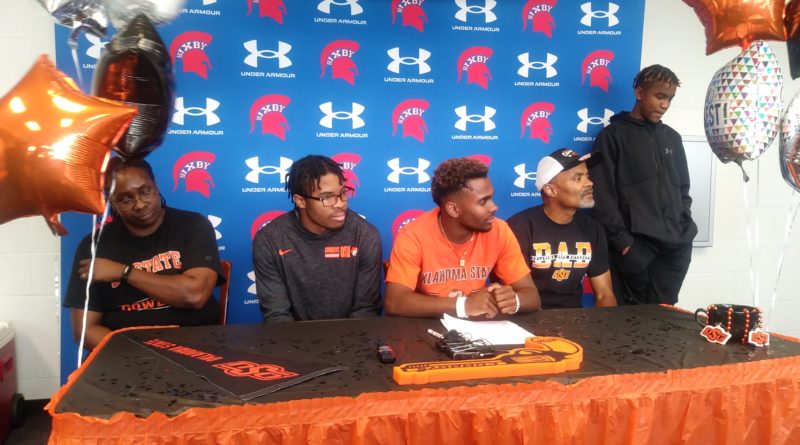 The younger Presley, the standout senior running back/receiver at Bixby, initially explored other options in regards to deciding on his college choice. But in the end, he felt his best choice was being reunited with his brother.

With several family members in attendance, including Brennan – a sophomore wide receiver at Oklahoma State – Braylin Presley finally made it official Wednesday afternoon, signing with the Cowboys in a ceremony at the high school athletic facility.

“(Brennan) told me to explore my options; he said don’t just base it off where he is because where he is may not be the best school, but after exploring my options and weighing in, just thinking about it, I was all in,” Braylin Presley said. “That was the best option for me, with him being up there and with (OSU coach Mike) Gundy and all they’ve done building that program, I just want to be a part of that.”

Braylin Presley just wrapped up a stellar career at Bixby in which he accounted for 102 career touchdowns and 7,500 all-purpose yards while becoming the school’s all-time leading rusher. He also won a state championship all four seasons as a Spartan, the latest coming earlier this month when Bixby won its fourth straight 6AII championship with a 63-14 win against Edmond Deer Creek.

In that game, in which the Spartans also set a state 11-man record with their 49th consecutive win, Presley threw a 76-yard halfback pass for a touchdown on Bixby’s first offensive snap and later added 171 yards rushing and three touchdowns.

But he added Wednesday’s signing ceremony as another special moment.

“I want to say more emotions are flying than winning the state championship about two weeks ago, because it’s something you work so hard at and not many people get to do this, but just to be in this position, to be able to do what I’m doing (Wednesday), it’s unbelievable,” Presley said.

And now Braylin will get to reunite with his older brother Brennan, who was Braylin’s Spartan teammate during his freshman and sophomore seasons.

“I’m extremely excited,” Braylin Presley said. “It’s a connection that hasn’t been there for two years, but just to get the opportunity to go there and do that again, not only play with Brennan but playing with Coach Gundy, Coach (offensive coordinator Kasey) Dunn, all those coaches down there, I’m just extremely blessed and extremely fortunate to do what I’m going to do at Oklahoma State.”

Though he didn’t use any direct influence on his younger brother, Brennan Presley had a feeling that Braylin was going to join him at OSU. In fact, when Braylin announced his commitment to the Cowboys, Brennan needed two words to sum up his reaction.

“About time,” Brennan Presley said. “I knew it was going to happen, but I just didn’t know when, so it was just one of those things.

“I really thought that would be cool; it’s always cool to play with your brother. … Just the fact that it’s set in stone now that he’s going to be up there, it’s honestly surreal.”

Brennan added that he was going to not give his brother too much advice on what it will be like once he gets to Stillwater, letting him figure things out on his own. But Brennan noted that he will be there if Braylin had any questions.

“College is majorly different, so I can’t really tell him that much that he’s going to experience up there, but I can tell him as much as I want to,” Brennan said. “But going through it is a whole different thing, so I’m going to let him get up there, be who he is, let him go through it and if he has questions and all that stuff, I’m always there.

“But as far as that, I’m going to let him try to experience it as much of it on his own as possible.”

As far as what position he will play with the Cowboys, Braylin said, in all likelihood, he will also be a receiver.

“From talking to Coach Dunn, he said mainly receiver; the slot position where Brennan plays but probably with a little bit of running back in there, but I’m just ready to get up there in the summer and hopefully get more in-depth of what I’m going to play,” Braylin said.

“I’m glad this day is here, I’m glad it’s all done and set in stone so I can get down there with the Cowboys.”