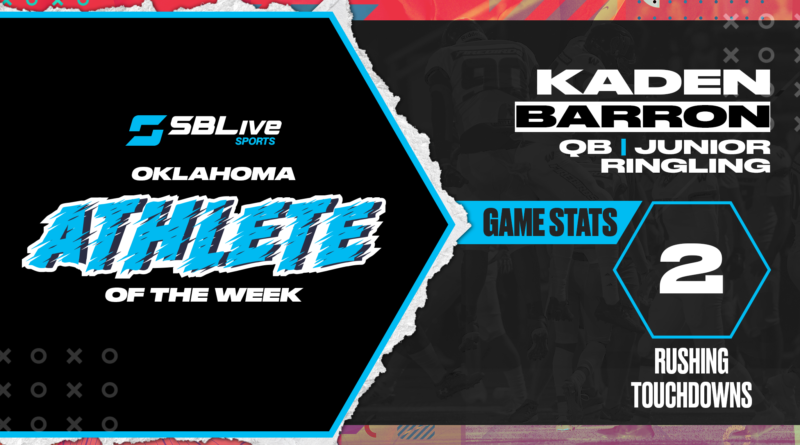 Congratulations to Ringling quarterback Kaden Barron for being voted SBLive’s Oklahoma High School Athlete of the Week for Nov. 29-Dec. 5!

The senior accounted for both Blue Devil touchdowns on running plays in his team’s 13-12 Class A semifinal win against Morrison.

Baron ran away with this week’s honor, receiving 92.97% of the total vote.

A senior tailback/receiver, Presley rushed for 171 yards on 16 carries and three touchdowns and also threw a 76-yard TD pass as the Spartans won their fourth straight 6AII title with a 63-14 win against Edmond Deer Creek. He also scored his 100th career TD in the win.

Solomon, a receiver, caught four passes for 141 yards, three of which went for touchdowns, including a 76-yarder in the first quarter.

A senior linebacker, Puckett led the Spartans with eight total tackles. He also had one tackle for loss, one sack and one quarterback pressure.

The senior quarterback completed 8-of-11 passes for 123 yards and two TDs and also caught a 2-yard TD pass as the Dutch repeated as 3A champs with a 24-16 win against Lincoln Christian. He also had 10 tackles, and preserved the win with an interception in the end zone in the closing seconds.

A defensive lineman, Jenney registered 10 total tackles and had 1.5 sacks and 1.5 tackles for loss.

A senior quarterback/linebacker, Powell rushed for 134 yards and three TDs while passing for 43 yards in the Red Tornadoes’ 35-0 win against Tuttle for the 4A title. Powell also was the team’s leading tackler with nine stops.

The senior cornerback intercepted two passes, both of which set up points for the Red Tornadoes. He also had the team’s only pass breakup.

Bennett rushed for 63 yards on nine carries in the Red Tornadoes’ 4A state title win.

The junior tailback returned to the field after missing the 6AI semifinals with an injury and rushed for 147 yards on 27 carries as the Trojans repeated as 6AI champs with a 30-15 win against Tulsa Union.

The freshman signal-caller completed 8-of-11 passes for 79 yards and had two rushing touchdowns.

A receiver/defensive back, Walls caught two passes for 30 yards and sealed the Trojans’ title win by returning an interception 31 yards for a touchdown.

The Cardinals’ senior quarterback rushed for 121 yards on 20 carries and four touchdowns, including the game-winner with 1:52 left, as the Cardinals defeated McAlester, 42-35, for the 5A title. He also completed 8-of-13 passes for 128 yards and two TDs.

The senior tailback rushed for 169 yards on 16 carries in the Cardinals’ 5A title game win.

A senior receiver/defensive back, Hammond caught seven passes for 119 yards and two touchdowns. He also preserved the Cardinals’ 5A title win by knocking down a pass near the end zone on the game’s final play.

Bergner intercepted two passes, returning one 95 yards for a touchdown in the first half of the Outlaws’ 28-16 2A semifinal win against Eufaula. His other pick set up an Outlaws’ TD.

A quarterback, Cantrell threw a 41-yard pass to set up the Warriors’ first touchdown; then threw a 15-yard TD pass in Washington’s 14-8 2A semifinal win against Beggs.

The quarterback passed for 154 yards and two TDs, including the game-winner with 3:27 left in the Wildcats’ 35-31 win against Pawhuska in the Class A semifinals. He also rushed for 113 yards on 20 carries and two TDs.

A senior tailback, Pippin had four total touchdowns as Timberlake claimed the Class C title with a 48-36 win against Mountain View-Gotebo. He rushed for 167 yards on 18 carries and three TDs, and caught six passes for 101 yards and a TD.

Judd had three touchdowns, a rushing TD and two TD catches, including a 57-yard reception to end the opening half of the Class C title game.

The quarterback threw three touchdown passes, including a 57-yarder on the final play of the first half in the Class C championship game.