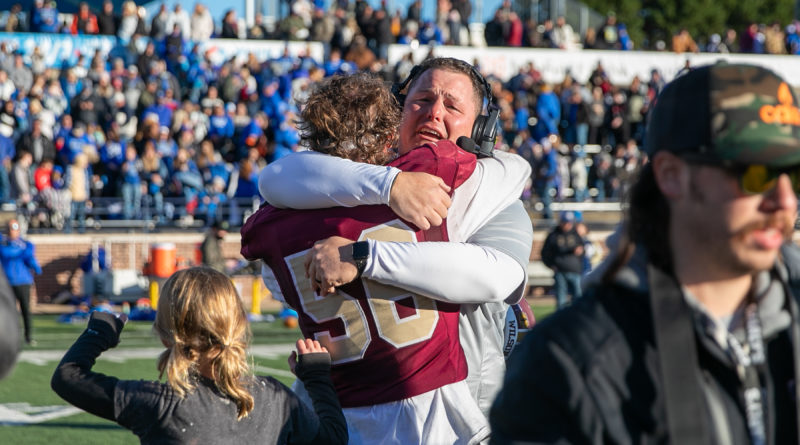 EDMOND — With the Class A state title hanging in the balance, all Cashion quarterback Ben Harman wanted was to get another chance.

The Wildcats had reached the Ringling 20-yard line with more than three minutes left and the score tied 14-14, but Harman threw an incomplete pass on fourth down.

“I knew if we can just rely on our defense; we stopped them before, and I knew if I just didn’t turn the ball over and didn’t give them momentum, then our defense could shut them out and give us one more chance,” Harman said.

The senior, and three-year starting quarterback, did get that final chance as Cashion’s defense forced a punt. Harman then helped orchestrate the Wildcats’ eventual repeat championship.

Cashion drove 67 yards in nine plays, capped by Harman’s 9-yard touchdown pass in the corner of the end zone to Mason Manning with eight seconds left. The Wildcats went on to repeat as Class A champions with a 21-14 win at Chad Richison Stadium.

“We just kind of kept grinding on offense and finally put a drive together late,” Cashion coach Lynn Shackelford said. “We’ve got some kids that are really good with the ball in their hands and (Manning is) one of them, and Mason had a chance to go in to the end zone and he made a play.”

The game-winning touchdown came on third-and-7 from the Ringling 9 after Cashion (14-1) called its final time out with 16 seconds left.

Before that drive, Shackelford didn’t say anything to his three-year starter at quarterback. But prior to that third-down play, the coach finally spoke up.

Harman took the snap and launched a fade toward the left corner of the end zone.

Manning, one of the Wildcats’ top receivers, was blanketed by a Blue Devil defender but timed his jump to grab Harman’s pass and come down with the catch.

“I was thinking I was just going to go up and be more athletic and just go down and get it,” Manning said. “It was just one of the best feelings, that whole last drive, where we were dominating and moving it down the field. Our run game was doing good, our short game passes were doing good and we were just setting up a back zone touchdown to win it.”

Brycen Hogan kicked the PAT for a seven-point lead.

Ringling (14-1)  returned the ensuing kickoff to its own 41, setting up one final chance, but a desperation pass was knocked away by the Wildcats.

Cashion’s win also avenged a loss two years ago to Ringling for the Class A title.

Earlier on Cashion’s game-winning drive, Harman eluded a blitz to release a screen pass to tailback Nick Nabavi, who took it 14 yards to the Wildcat 48. Harman then found Manning on the next play for 10 yards to reach Blue Devil territory.

On second-and-13 from the 45, Harman found no open receivers and took off. He made it to the 25 for a 20-yard gain, getting Cashion closer.

Harman then found Nabavi again on the next play for a 13-yard gain down to the Ringling 12. Three plays later, Harman hooked up with Manning for the game-winner.

“I thought the biggest plays we made, especially on that last drive, was Ben kind of just moving around and finding somebody getting open and we were able to convert a couple of times, and just got us in a position where we could take a shot at the end zone,” Shackelford said.

That touchdown was the 14th reception in the game for Manning, as he finished with 195 yards receiving. He also had a first-quarter touchdown.

Manning also made 11 tackles on defense at linebacker. He set up Cashion’s other TD by forcing a fumble, which was returned 50 yards by safety Max Brown late in the opening quarter.

But the Wildcats also won the game with defense. They held the Blue Devils scoreless in the second half and allowed 101 yards in that span.

“I thought the first half, we got punched in the mouth and we kind of took it,” Shackelford said. “We challenged them at halftime to kind of (fight) back a little bit, and I thought defensively, we played incredible; to hold them to two touchdowns I thought was amazing.

“I thought (defensive coordinator Tony Wood) had a tremendous plan. I thought we made some adjustments, especially at halftime, that gave us a lot better chance at slowing them down. Then we just kind of hung in there.”

Cashion scored the game’s first points shortly after getting a big break.

On an apparent pitch play, Ringling’s Julius Koons stepped in front of the intended recipient to pick off the pass, returning it nearly 60 yards to the Wildcats’ 6. But it was ruled that the ball hit the ground, resulting in an incomplete pass as Cashion kept possession.

The Wildcats then successfully converted a fourth down, and on the next play, Harman launched a strike to the end zone. Manning came down with the ball to finish off a 31-yard touchdown.

Ringling responded with a seven-play, 67-yard march on the next series. Junior tailback Kaden Barron ended it with a 12-yard run to the end zone, making a spin move right before reaching the goal line.

Barron stayed in to kick the PAT, tying it at 7-all with 2:27 left in the first.

Ringling got the ball right back after forcing Cashion to punt. But one play later, the Wildcats’ defense came up huge.

On a running play, a hit by Manning popped the ball free.

Brown, a junior, picked up the ball in mid-air and raced in untouched from 50 yards out, with Hogan adding the PAT for a 14-7 Wildcat lead with 1:36 still left in the opening quarter.

“I saw it was a stretch play to (Brown’s) right and I was running (in pursuit),” Brown said. “Then I saw the ball pop out out of his hands and was like, well, I’m taking this to the house. … It was the right place at the right time.”

Ringling tied the score near the midway point of the second quarter.

One play after Kanyon McGahey returned a punt 24 yards to the Cashion 25, senior Coltin Fincher finished things off with a touchdown run. Barron’s PAT evened affairs at 14-all with 6:43 to go in the first half.

Fincher totaled 149 yards on 25 carries, while Barron had 67 yards on 14 rushes. Ringling completed just 2-of-11 passes on the day.

Gavin Phippen, a senior defensive back, had 12 total tackles for Cashion, while Manning and sophomore linebacker Bryce Burke each finishing with 11 stops.

Ringling’s top tackler was senior linebacker Brayden Johnson, who had 10 tackles, including a sack.