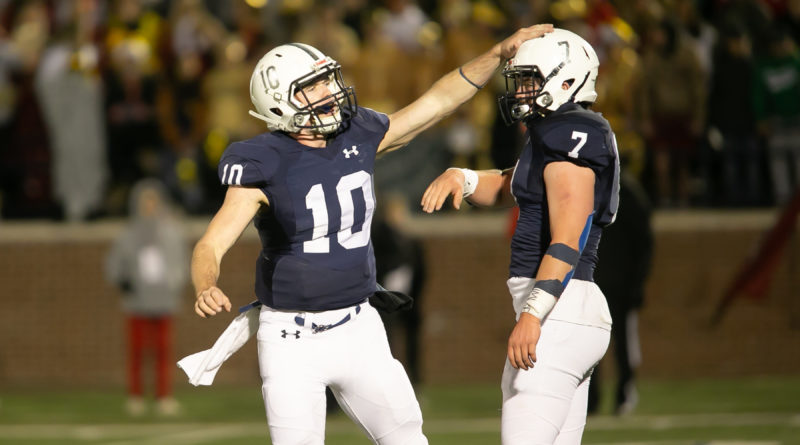 EDMOND — Jace Gilbert has been a do-it-all player for Marlow on offense, defense and especially on special teams.

The Outlaws needed Gilbert to be on top of his game one more time. And the senior standout promptly delivered.

Gilbert accounted for both of the Outlaws’ first-half touchdowns, kicked two extra points and had an important field goal in the fourth quarter. Marlow’s defense did the rest as the Outlaws defeated Washington, 17-13, for the Class 2A championship Saturday night at Chad Richison Stadium.

“It’s great, it’s unbelievable, it really hasn’t set in yet,” Gilbert said. “But yes, if I was going to play my last game, this is how I wanted to go out, so it’s a great feeling.

“We have a ton of guys, and I tell them all the time, they make me look a lot better than I really am, and I don’t want to name anybody because there’s too many to name, but we have a ton of good football players that it’s unbelievable playing with them.”

Both of Gilbert’s two total touchdowns in the first half occurred in the second quarter. His passing TD came with four seconds left in the half, a 6-yard strike to Kyle Wilson which gave Marlow a 14-7 lead.

With the Outlaws hanging on to a 14-13 advantage, Gilbert then connected on a 33-yard field goal with 8:12 remaining.

Gilbert nearly came up with the play of the night on defense, as he deflected a fourth-down pass while the Warriors (14-1) were driving in the final minutes. But the ball landed in the hands of Washington receiver Luke Hendrix for a first down at the Outlaws’ 41-yard line.

Three plays later, however, Marlow did come up with the big defensive play.

Senior defensive end Brennan Morgan knocked the ball loose on a running play, and senior linebacker William Hewitt made the recovery at his own 25 with 1:30 left.

With Washington out of time outs, the Outlaws went in the victory formation to run out the rest of the clock.

“I got my read, did what I was supposed to do and made the tackle,” Morgan said. “Then I saw the ball and it came out, and I was hoping that we would get on it.

“We had a chance, we gambled, we got on it and praise God for that.”

The fumble was the third takeaway on the night for the Warriors. The other two came on a pair of first-quarter interceptions from junior defensive back Avrey Payne.

“We got it down there a few times and shot ourselves in the foot with penalties, and we put it back on our defense and they answered the call every time. … They answered the bell,” Marlow coach Matt Weber said.

Special teams were also big. Gilbert, the team’s punter, had four punts for an average of 44.8 yards, with 50 yards being his longest.

Wilson blocked an extra point after Washington scored a third-quarter touchdown to get within one.

Then senior Will Bergner had 78 yards in return yardage, including a 34-yard return late in the first half to set up the Outlaws’ go-ahead TD before intermission. He also returned a punt 30 yards to the Warriors’ 20, setting up Gilbert’s field goal.

“I’m just grateful to make a play for our team and our community and win it all for everyone,” Bergner said. “It feels awesome.”

Marlow won the toss but elected to defer to the second half. Gilbert started the game by booming the opening kickoff right into the end zone for a touchback.

Then on Washington’s first snap from scrimmage, Payne intercepted a pass at the Warriors’ 33-yard line. But an illegal chop block penalty, coupled with a sack from Washington defensive lineman Hayden Milner, sent the Outlaws backward.

Gilbert then delivered a 36-yard punt that landed inside the Washington 10.

Washington picked things up on its second series, moving the ball deep into Outlaw territory before facing a fourth-and-4 at the Marlow 20.

The Warriors went for it, but for the second time, Payne was right there to come up with a pick. He got it inside the Marlow 10 and returned it to the Outlaws’ 35.

This time, the Outlaws capitalized as action shifted into the second quarter.

Marlow put together a seven-play 65-yard scoring drive. It ended when Gilbert took a snap and took a keeper 13 yards into the end zone.

Gilbert added the PAT as Marlow took a 7-0 lead with 9:46 left in the opening half.

But the Warriors responded by putting together a 17-play, 78-yard drive which took 7:40 off the clock.

Moments after Cantrell hooked up with Kobe Scott on a fourth-down pass inside the Marlow 25 and a first down, sophomore Kade Norman took a keeper in the Wildcat and ran it in from a yard out.

Sam Hegeman’s PAT evened things up at 7-all with 1:59 left until halftime.

Marlow answered right back, starting with Bergner’s 34-yard kickoff return to the Warrior 49.

The Outlaws marched the rest of the way to go in front with four seconds left until halftime.

One play after Bergner made a shoestring grab of a Gilbert pass for 11 yards to the Warriors’ 6, Gilbert struck again with his arm. After initially looking to his left upon getting the snap, Gilbert immediately went to his right and found Wilson.

Wilson made the grab at the 1 and reached the end zone. Gilbert’s PAT upped the Outlaw advantage to 14-7.

Marlow won despite being held to 126 yards of total offense, 65 of those passing. Gilbert was 12-of-19 for 65 yards, with Bergner catching 10 of those passes for 46 yards.

The Outlaws’ top rusher was senior tailback Julian Marroquin, who had 61 yards on 13 carries.

Washington tailback Cole Scott, a junior, rushed for 224 yards on 33 carries, including a 62-yard TD early in the second half that pulled the Warriors within one. Sophomore quarterback Major Cantrell was 7-of-13 passing for 74 yards, with senior receiver Kobe Scott catching three passes for 32 yards.

The Warriors finished the night with 307 yards of total offense, including 233 rushing.

Wilson, a senior, was the only player on either side to finish in double digits in tackles, ending up with 13, seven of those solo stops.