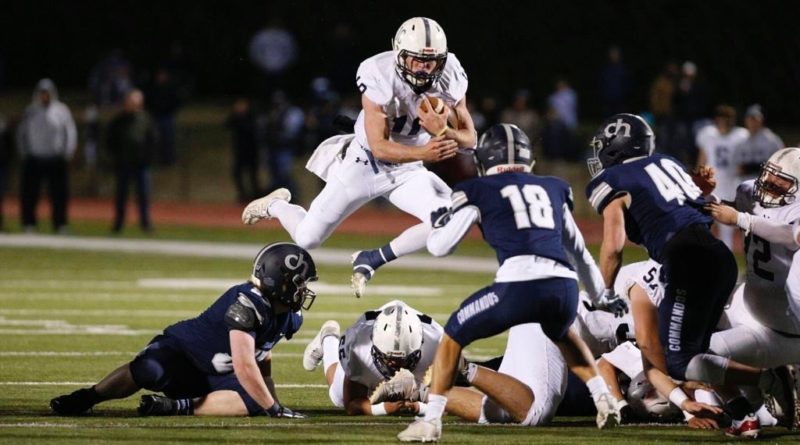 On Saturday night, the final gold ball will be awarded to a state football champion.

In that game, for the Class 2A championship, it will go to an undefeated squad. Washington and Marlow, both 14-0 on the season, face off on 7 p.m. Saturday at Edmond’s Chad Richison Stadium for the final state title football game for 2021.

The Warriors and Outlaws do have some recent history. They’ve played six times since 2014, with Marlow holding a 4-2 edge, though Washington won the most recent contest between the two, 13-7 in 2019.

“We play them in just about every other sport and we’re big rivals with them, so there’s some familiarity with the players in the other sports we play against them,” Washington coach Brad Beller said. “But ever since our seniors and their seniors were in junior high, we knew both groups were going to be special, so it’s a really neat thing to be able to experience this with the community that’s as supportive as Marlow and Washington are.”

The Warriors have been determined to get back to Edmond after losing last season’s 2A title game to Metro Christian, 48-37. Washington is seeking its first gold ball since 1996.

“I think that is definitely a factor of determination,” Beller said.

“I think there is a team that’s instead of satisfied of just being there, I feel like they’re determined to go there and having a better plan and a better showing because we did not play great at times in that game. … Nothing against Metro Christian, but just we didn’t feel like we gave them our best shot.”

The Warriors have averaged 47.5 points and 412.6 yards of offense per game and they feature talented skill players. But Beller pointed out the team’s relatively young offensive line has come together over the course of the season.

The Warriors have a pair of receivers that help pace the offense in Luke Hendrix and Kobe Scott. Hendrix has caught 40 passes for 1,074 yards and 14 TDs, while Scott has 30 receptions for 648 yards and 10 TDs.

But it’s been the other side of the ball that may be the Warriors’ biggest strength. On defense, they have allowed 10.1 points per game and have posted four shutouts.

In last week’s semifinals, they held a strong Beggs offense in check in a 14-8 win after the Warriors were held scoreless over the final three quarters.

“That is definitely the foundation of what this team is built on is really trying to take away what teams do the best and try to limit them and force them to do things they normally don’t do as an offense,” Beller said. “Our guys have really bought into just being aggressive and also disciplined at the same time on the defensive side of the ball.”

The Warriors’ top tackler is linebacker Layne Spaulding, who had offseason shoulder injury and was expected to perhaps miss the entire season. But Spaulding has returned to register 129 total tackles, including 83 solo stops. He also has 28 tackles for loss, six sacks and 14 quarterback hurries.

Marlow is making its first title game appearance since 2006, when the Outlaws lost to Claremore-Sequoyah for the 3A title. The Outlaws are seeking their first title since winning it all in 1966, when they beat eventual 6A superpower Bixby for the Class B championship.

“We’re where we wanted to be with our preseason goals,” Marlow coach Matt Weber said. “Our kids set these goals early on and a lot of times, kids say they want to be state champions and some years, it’s not a realistic goal, you’ve got to have really good players.

“But this year was a realistic goal and you’ve also got to have a lot of good things happen to you and that’s happened also. We’ve stayed healthy, and here we are.”

One reason for the Outlaws making it this far is the presence of one of the more talented players in the state in senior Jace Gilbert, literally a jack of all trades.

Gilbert has converted 79-of-80 PAT attempts and 8-of-10 field goal attempts, with a long of 52 yards, and punts, even booming a career-high 60-yard punt. Of the 106 kickoffs Gilbert has made, 92 of those went for touchbacks.

“We saw him as a sophomore the last time we played each other,” Beller said. “He was starting at quarterback, and he was a handful then, so he knows the offense and the defense inside out and a great leader and a great young man, and just a really fun talent to watch playing football.”

Plus, Gilbert is playing some defense, having been at strong safety during the Outlaws’ playoff run.

“We played him zero on defense last year, and we didn’t start playing him this year until we got to the playoffs. … Since we’ve been in the playoffs, we’ve been starting him in the playoffs both ways and he’s brought some more moxie to our defense,” Weber said.

“He’s a 6-foot-1, 200-pound kid that can play strong safety, and so he can get down in the run box and play like a linebacker and also has good enough feet that he can play the pass also.”

But Marlow is far from a one-man show.

The Outlaws have also gotten a boost from tailback Julian Marroquin, who came back from a midseason injury to record 757 yards on 87 carries and 15 TDs. He also caught a 57-yard TD pass in last week’s 28-16 win against Eufaula in the 2A semifinals, which also happened to be his first career reception.

Will Bergner has caught 53 passes for 1,018 yards and 14 TDs. He intercepted two passes in last week’s win, returning one of those 95 yards for a TD.

The Outlaws have also held opponents to 10.1 points per game, with players such as linebacker Kyle Wilson leading the charge.

“We had 61 for a 2A school, sophomores through seniors, and now that we’ve let our freshmen come up, we have 19 freshmen playing up so we suit up 80 kids,” Weber said. “Our kids still really get along well together, they enjoy the locker room and enjoy being on the practice field.”