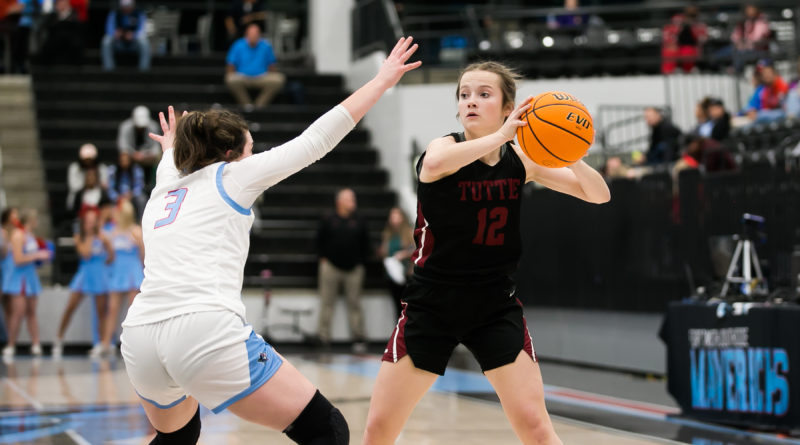 Coming off of 4A state championship in March, the Lady Tigers returned several integral pieces for the 2021-22 season and there are some who believe they can make it back-to-back championships when the dust settles.

For now, though, Lester is just focused on constant improvement.

Playing in just their second game this season, the Lady Tigers had little trouble with Fort Smith Southside in Thursday’s opening round of the Taco Bell Tournament of Champions. Tuttle had a double-digit lead several minutes in and went on to a decisive 66-25 win at the Southside High School arena.

“Everybody wants to say, because we’ve got four returning starters, that ‘Oh, you guys are going to win it,’ but I haven’t really focused on it,” Lester said. “It’s a new year, it’s a new team; yes, we have a lot of the same kids, but we’re trying to get better each and every game.

“I feel like if we can continue to get better in practice and games, then in the end, I think we’ll have a chance.”

Plus, though Tuttle (2-0) won Tuesday’s season opener against Kingfisher, 46-22, there were some periods of offensive inconsistency.

That wasn’t the case on Thursday.

“On opening night Tuesday, our offense was kind of a little sluggish and we didn’t shoot the ball very well, though defensively we were really good,” Lester said. “But I felt (Thursday) that the ball was moving, we got in a little bit of rhythm offensively and you could tell it was game two and not game one.

“We’re just so big and long and we’re athletic at the top; our guards are so active and get a lot of touches.”

Hadley Periman, a 6-foot-2 senior, finished with 14 points while making all seven of her free-throw attempts.

The other ToC semifinal on Friday pits Arkansas schools West Memphis and Fort Smith Northside. Friday’s semifinal winners square off for the championship on Saturday.

The Lady Indians came up short in Thursday’s opening round, as defending Arkansas 6A champion Northside made several big plays down the stretch.

Northside started the game on an 8-2 run and built an 18-5 lead at the end of the first quarter. The Lady Bears then extended that advantage to 14 in the second quarter before El Reno (2-1) ended the first half on a 15-2 run to cut Northside’s lead to one point at the break, 28-27.

El Reno senior guard Tetona Woods-Blackowl then opened the second half with a 3-pointer to put the Lady Indians ahead by two.

But Northside senior Haitiana Releford, the lone returning starter from last season’s team, answered on the other end. She was able to bank in a short jumper off the glass for a five-point Lady Bear lead.

Northside then forced a turnover, with senior Ashya Harris coming up with the loose ball. Freshman Erianna Gooden eventually iced the win with a foul shot with 11 seconds left.

For the Lady Indians, Woods-Blackowl finished with 22 points. She was 7-of-14 from the field and 7-of-8 from the line.

El Reno will play Howe at 4 p.m. Friday in a consolation-round semifinal.

West Memphis pulled away late in the end to win its opening-round Tournament of Champions game against Howe, which won Class 2A in Oklahoma a season ago.

The Lady Blue Devils built a 19-12 lead through one quarter, before Howe got within two at the half, 27-25. West Memphis was up 36-31 after three quarters before building a sizable lead early in the fourth.

Howe made one more push, getting within six. But West Memphis junior guard Janiyah Tucker made a driving layup and sophomore Aniya Price hit a 3-pointer seconds later to push the lead back into double digits.

For the Lady Lions, senior guard Shiloh Fletcher finished with 16 points and was a perfect 6-of-6 from the foul line. Kayley Turner, another senior, added 12 points and went 4-of-5 from the field.

The Lady Bulldogs built a big first-quarter lead and never looked back as they rolled to an opening-round win Thursday.

Greenwood outscored Ada in the first quarter, 17-7, and then extended the lead to 15 at halftime, 31-16. The Lady Bulldogs then dominated the third quarter, outscoring Ada 21-7 to build a commanding 52-23 advantage.

Greenwood’s defense held Ada to six first-half field goals and four after halftime. Ada made only one 3-point attempt all night.

Jakobi Williams, a 5-8 sophomore, led the Lady Cougars with 12 points. She was also a perfect 5-of-5 from the foul line.