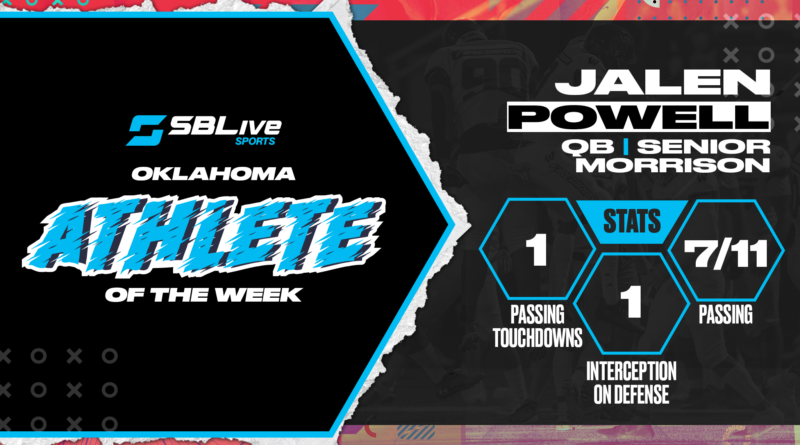 Congratulations to Morrison quarterback Jalen Powell for being voted SBLive’s Oklahoma High School Athlete of the Week for Nov. 22-28!

The senior completed 7-of-11 passes including a TD while adding a game-sealing interception in Morrison’s 12-0 win at Tonkawa in the Class A quarterfinals.

Powell ran away with this week’s honor, receiving 61.4% of the total vote. There were over 20,000 votes tallied this week!

McCarty rushed for 203 yards on 20 carries and had four TDs along with catching two passes for 74 yards in the Buffaloes’ 42-13 win against Lawton MacArthur in the Class 5A semifinals.

Dennis completed 11-of-19 passes for 193 yards and three touchdowns to help the Tigers stay undefeated in a 28-21 win against Poteau in the 4A semifinals.

Brown rushed for 111 yards on 17 carries with a touchdown as the Demons defeated Crossings Christian, 48-12, in the 2A quarterfinals.

Gilbert rushed for 186 yards and two TDs, passed for 118 yards and a TD, kicked five extra points and a 46-yard field goal in the Outlaws’ 38-7 win at Cascia Hall in the 2A quarterfinals.

Hendrix caught eight passes for 173 yards and two TDs while returning an interception 86 yards for another TD in the undefeated Warriors’ 54-28 win at Rejoice Christian in the 2A quarterfinals.

Deere caught five passes for 133 yards and three TDs while picking off four passes on defense in the Ironheads’ 31-14 win at previously undefeated Oklahoma Christian School in the 2A quarterfinals.

Roush accounted for 260 yards of total offense and four TDs, including throwing three first-half TD passes, as the Dutch downed Verdigris, 35-6 in the 3A semifinals.

Brown passed for 89 yards and a TD and added 80 yards rushing on 24 carries, including the game-winning TD with 12 seconds left in the Bulldogs’ 27-20 win against Heritage Hall in the 3A semifinals.

Gilkey had 138 yards rushing on 19 carries and scored two TDs, including the go-ahead TD with less than two minutes left, to pace the undefeated Cardinals past Midwest City Carl Albert, 27-20, in the 5A semifinals.

Manning caught seven passes for 208 yards with two TDs as the Wildcats posted a 41-22 win at Woodland in the Class A quarterfinals.

Powell threw a go-ahead TD pass in the second quarter and iced things with a 2-yard TD keeper with less than five minutes left as the Red Tornadoes defeated Elk City, 17-7, in the 4A semifinals.

The quarterback completed 11-of-18 passes for 160 yards and three TDs and had 211 yards rushing on 17 carries and four TDs in Balko-Forgan’s 58-12 win against Davenport in the Class B quarterfinals. He also intercepted two passes on defense.

Brownfield caught eight passes for 125 yards and two TDs while recording 14 tackles on defense in the Dragons’ 86-52 win against Seiling in the Class B quarterfinals.

Wildcat, a defensive lineman, recorded 19 total tackles, 10 solo, along with three tackles for loss and a quarterback pressure in the Huskies’ 47-0 win at Elmore City-Pernell in the Class A quarterfinals.