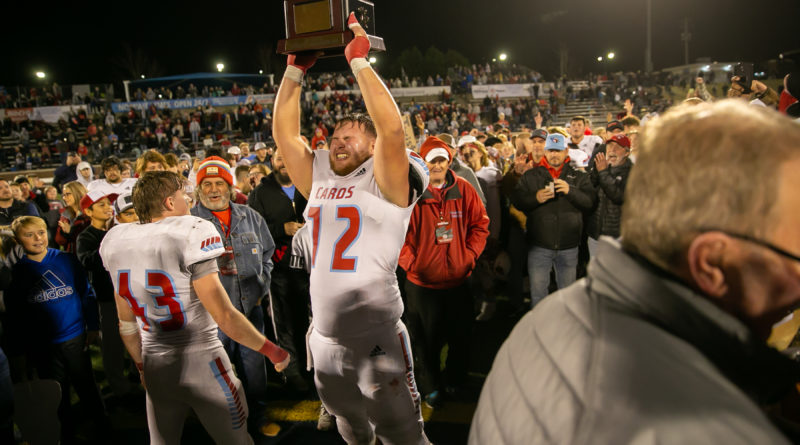 EDMOND — There was some general thought, of the five state title games this weekend, the 5A title game could potentially be the most entertaining.

And Collinsville and McAlester, both sporting 13-0 records, certainly didn’t disappoint. Each team made countless big plays and each had at least 400 yards of total offense.

In the end, though, it was the Cardinals’ defense that came up huge, with one of their top offensive standouts making the game-saving play.

Senior Oscar Hammond, who caught two first-half touchdowns, knocked down a pass near the goal line on the game’s final play as the Cardinals outlasted McAlester, 42-35, at Chad Richison Stadium.

“It was crazy, man, it was crazy,” Hammond said. “There were a lot of things that were happening that we couldn’t control, but I just played my hardest and had a great time doing it.”

Saturday’s title was the first gold ball in program history for the Cardinals (14-0).

In a game that featured five tie scores, McAlester pulled even at 35-all with 4:52 left on junior tailback Erik McCarty’s fourth touchdown run on the night.

The Cardinals answered, with a six-play, 66-yard drive. On a second-and-goal from the McAlester 6, quarterback Andrew Carney – who missed several regular-season games with a severe knee injury – took a keeper around the right side.

Following a lead block from tailback Brayden Gilkey, Carney was able to get into the end zone for his fourth rushing TD on the night with 1:52 remaining.

Anthony Blau added the PAT for a seven-point advantage.

But now the Cardinals had to make one more defensive stand, and Jones knew it.

“(I told them) if we stop them, we’re state champions,” he said. “We just have to get a stop, and they were up for the challenge.”

McAlester (13-1), aiming to win its first gold ball since 1988, kept the final drive going by converting a fourth-down, as quarterback Trent Boatright found receiver Lleyton Bass. The two connected again for a 12-yard gain to the Collinsville 43 with 17 seconds to play.

Cardinal senior defensive end Cody Talkington came through with a sack, forcing McAlester to call its final time out. On the next play, a pass went incomplete, leaving the Buffaloes with one more chance with six seconds to go.

Boatright launched a deep pass in the direction of the end zone. But senior defensive back Oscar Hammond knocked the pass down right in front of the goal line, allowing Collinsville to finally strike gold.

“I saw the ball going up and I saw it coming right towards me,” Hammond said. “So I saw it, I jumped up as high as I could and swatted it as hard as I could down.

“When I saw it hit the ground, I was so happy, it just all hit me at once.”

For the game, McAlester had 448 yards of total offense, 310 of those via the rush. Collinsville finished with 424 total yards, 296 rushing and 128 passing.

Carney finished the night by completing 8-of-13 passes for 128 yards and two TDs, while rushing for 121 yards on 20 carries and four TDs.

Gilkey added 169 yards on 16 carries. Hammond, who was the Cardinals’ top receiver, hauled in seven passes for 119 yards and two TDs.

McCarty led all rushers with 268 yards on 31 carries and four TDs, and also threw a 12-yard pass. Boatright was 10-of-17 passing for 126 yards and had a rushing touchdown as well.

McAlester chose to receive the opening kickoff and needed just three plays to convert for its first TD. Thanks to a long kickoff return from Caden Lesnau, the Buffs moved the ball 52 yards down the field, capped by McCarty’s 6-yard keeper into the end zone.

Then, the two teams each scored two touchdowns in the final three minutes of the opening quarter.

Collinsville tied the score at 7-all on a 1-yard keeper from Carney and the PAT from Blau, capping an eight-play 74-yard drive.

Just 47 seconds later, due to another long kickoff return, McAlester needed two plays to strike again. After McCarty rumbled 44 yards to the Cardinal 1, he got the call again and crossed the end zone as the Buffs went up 14-7.

But Collinsville responded with a two-play drive of its own, as Carney fired a 23-yard TD pass to Hammond.

McAlester then scored the fifth total touchdown on the final play of the first quarter, with McCarty going in for the third time. That came on a 1-yard keeper to cap a three-play 66-yard series.

Clark’s PAT with no time left on the clock gave McAlester a 21-14 lead at the conclusion of the opening quarter.

The Cardinals tied it for the third time on the ensuing series. They went 65 yards in seven plays, and for the second time, Carney connected with Hammond.

The Cardinals finally took their first lead of the night after they took the second-half kickoff and marched 69 yards in 12 plays, ending with Carney’s 2-yard keeper. McAlester answered late in the third quarter, tying the score at 28-all on Boatright’s 4-yard run.

Collinsville went back in front, 35-28, on Carney’s 1-yard run with 9:53 left in the game, before the Buffaloes scored on their next series.

But finally, the Cardinals got the go-ahead touchdown and one more defensive stand to finally bring the gold ball back to Collinsville.

“It’s amazing; I love to see my town come out and support, and I’m glad we were able to get it done for them,” Gilkey said. “My team’s incredible.

“I was just laying it all on the line. I was tired; it had been a long, running game, a lot of ups and downs. … But I’m glad that we all just came together whenever we started off this game down.”