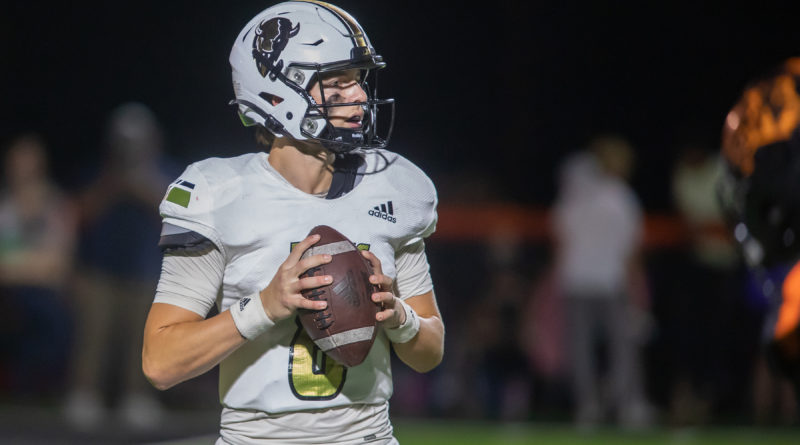 In one of Oklahoma’s most compelling high school football classifications this season, two 13-0 squads have survived.

Now, in the finale of five title games in a three-day span at Edmond’s Chad Richison Stadium, either Collinsville or McAlester will be left standing, with a Class 5A gold ball in hand.

The 13-0 Cardinals go up against the 13-0 Buffaloes for the 5A championship, with kickoff set for 7 p.m. on Saturday.

“A lot of times, you get that emotional roller coaster when you make it, and it’s comforting to know the kids expected to be there; now they’re in to win it.”

It’s also a game featuring two of the most prolific offenses in the state. The Cardinals come in having scored 658 total points while the Buffaloes have put up 585 on the scoreboard so far.

“I think they’re a lot like us,” Collinsville coach Kevin Jones said of McAlester. “I think they’re a physical football team, I think they’re really competitive and love to play the game. They’ve got a super dynamic player in (Erik) McCarty; he’s an absolute beast, and all those guys around him can play, too.

“Then their defense is just stingy; 21 points is the most they’ve given up all year, so they’re a very solid football team, there’s no question about that.”

While Collinsville has enjoyed a tremendous season, it hasn’t been easy. The Cardinals have had to deal with the injury bug, most notably to their starting quarterback, Andrew Carney, who missed several regular-season games.

But Carney returned late in the regular season, and has still thrown for more than 1,000 yards and 15 touchdowns.

Carney and senior tailback Brayden Gilkey, who has 1,428 yards on 159 carries and 28 TDs, have also formed a dangerous rushing tandem.

In a 5A quarterfinal win against Bishop McGuinness, Carney and Gilkey teamed up to run the ball for nearly 600 yards and eight total TDs. Then in last week’s 27-20 semifinal win against defending five-time 5A champion Midwest City Carl Albert, they combined to rush for 342 yards and all four Cardinal TDs.

“Then the other thing is just how strong they are; they’re so strong running the football, both of them, and they’re not easy kids to bring down, especially with just one guy on the first hit, so they both gain a lot of yards after contact. … We’re really blessed to have those two and then we’ve got a great offensive line up front, too, that gets after people and plays really hard so we’re really blessed.”

“In my opinion, he’s the most under-recruited player in the state of Oklahoma,” Jones said. “I don’t understand why he’s not getting more offers than he has; I feel like people are really missing out on him.

“He doesn’t have just incredible speed, he runs about a 4.6, but on Friday nights, I think he’s more like a 4.5. When the lights are on, he’s a faster player than he is.”

Mazey is also of the belief that Hammond may very well be the key to Collinsville’s offense.

“Obviously, they’ve got a two-headed monster at quarterback and running back with Carney and Gilkey, but to me, I think the guy that’s not been talked about enough is Hammond,” Mazey said. “I think he’s a stud.”

Hammond also leads the team in interceptions from his free safety position. Other Collinsville defensive standouts include junior linebacker Blake Gilkey, the team’s top tackler, and senior end B.K. Seago, who is the Cardinals’ sack leader.

Mazey had guided Poteau to two state semifinals and McAlester to the state semis last season, his second season with the Buffaloes. The Buffaloes made it to their first title game since 2013 with a 42-13 semifinal win against Lawton MacArthur.

Leading the Buffaloes’ charge is McCarty, a junior tailback. He is averaging just more than 10 yards per carry, with 1,741 yards on 171 carries and 34 touchdowns.

But McAlester also has a steady hand on offense guiding them in senior Trent Boatright. Boatright has completed 123-of-190 passes for 1,720 yards and 23 TDs.

“The kid that goes unnoticed the most really is (Boatright) and he really leads our team because he doesn’t make a lot of mistakes. … He’s just a quiet leader on the field and he puts up quiet numbers, but he’s efficient,” Mazey said. “He’s a great game manager and he’s a great kid, too.”

The Buffaloes also rely on their “Black Death” defense. Heading up that unit is senior linebacker Chase Faber.

Of his 136 tackles, 124 of those are solo stops. He also has 17 tackles for loss along with four sacks. Lineman Garrett Shumway has 75 tackles, 15 for loss, and five sacks, and defensive back Cale Prather has four of the Buffaloes’ 15 interceptions.

“It starts with our front seven; our three linemen are tough and then our two linebackers,” Mazey said. “Then in the secondary, we’re blessed; we’re long, we’re smart and we have some speed.

“Right now, we’re blessed to have the players we do; they believe in each other, they believe in the coaching staff and obviously, it’s got us this far; we’ve got a chance to play for it all Saturday.”

With a win, McAlester can claim its first state championship since 1988.

As for Collinsville, it would be its first gold ball in program history, and Jones realizes what that can mean for his team and community if the Cardinals are able to get it done Saturday.

“It would be huge, it would be so huge,” Jones said. “Collinsville is a football town and I told the guys (earlier this week) before practice that we’ve got a lot of work to do between now and Saturday, we can’t get ahead of ourselves.

“But man, you’ve just got to understand that if we find a way to win this game, they’ll be talking about you guys after you’re gone because even if we win another state title in Collinsville, this one will always be the first and that’s special and what a special group of seniors we’ve got; we’ve got 22 of them and they are a heck of a group.”