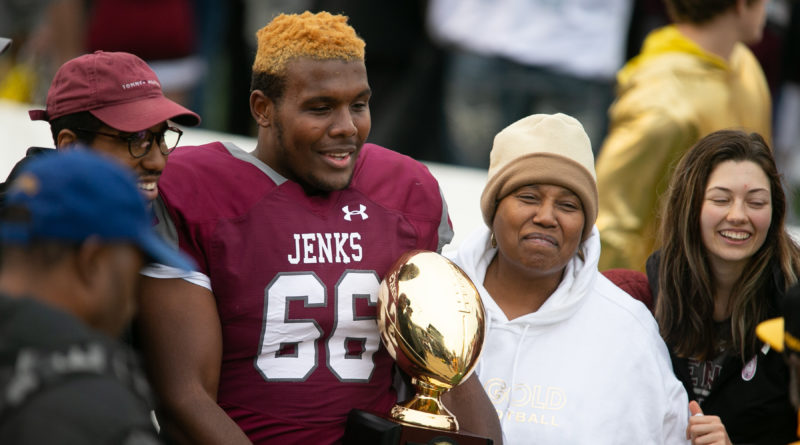 The Trojans gave up an 80-yard touchdown on the game’s opening play from scrimmage. They also allowed another long TD pass late in the first quarter to trail 15-0.

But the Trojans didn’t flinch. After all, they gave up the opening kickoff for a touchdown in last season’s 6AI title game before rallying to win.

So all the Trojans had to do was stay the course, which they did. Jenks eventually went in front in the third quarter and used its defense to bring home another gold ball, the 18th in program history, with a 30-15 win at Chad Richison Stadium.

“Ultimately, we won enough plays to get up and win the football game.”

The Trojans also intercepted three passes, the latter when junior defensive back Ty Walls jumped the route and picked off a pass, going in untouched from 31 yards out with 2:54 left to clinch the win.

Ironically, in last season’s 6AI title game, Jenks also got a late pick-six, coming from current senior Cade Stacy. Stacy made the last big play for the defense on Saturday when he knocked down a pass on fourth down with 1:34 remaining.

The Trojans then took over and ran out the clock to have a second straight celebration on the field with their fans. Jenks also beat Union for the second time this season, having won, 22-0, at Union in September.

“There was no reason to panic,” Riggs said. “Even down 15-0, our kids didn’t panic, they just kept going out; we still made some mistakes, but they kept playing and kept playing, and eventually got up on top.”

Another player who settled in on Saturday was quarterback Shaker Reisig, who was making his first start in a championship game as a freshman.

Reisig threw an interception on the second series and was replaced on the Trojans’ next drive by junior Ike Owens, though Reisig confirmed afterward it was designed to have Owens come in and get snaps.

But midway through the second quarter, after Reisig returned to the game, he led the Trojans on a quick three-play drive. Reisig capped it by taking a keeper around the left side from 26 yards out, putting the Trojans on the scoreboard.

“I was looking downfield forever and nothing was there, so I just decided to take off and made something happen,” Reisig said.

After Jaiden Carroll returned the second-half kickoff 41 yards to the Union 26, Reisig finished a seven-play drive with a 1-yard sneak. A try for two failed, but the Trojans were right back in the game, trailing 15-13.

Then, Jenks got a little bit of magic to take its first lead on the afternoon.

The Trojans got the ball back on a punt after forcing Union to go three-and-out. They reached the Redhawk 35; then junior tailback Jalyn Stanford broke off a long run.

Stanford appeared headed to the end zone, before Union’s Devin Robinson knocked the ball loose. The ball went into the end zone, but Jenks senior receiver Glenver Jones was there to fall on the ball for a touchdown.

“When I saw the ball, I just knew that we had to get it because it was in the end zone,” Jones said. “If I got it, we get a touchdown and if they get it, they get the recovery and they get the ball at the 20, so that was all going through my head.

“When I saw Jalyn running, I saw the safety that knocked the ball out; I saw him coming, so I knew to be on alert that he was going to try to strip the ball, and I just made a play.”

Following Jones’ fumble recovery in the end zone, Max Paskvan added the PAT for a 20-15 Jenks lead with 4:10 left in the third.

Paskvan then extended the Trojans’ lead to eight, 23-15, by connecting on a 26-yard field goal with 3:40 remaining.

Three plays later, with the Redhawks facing third down, Walls made his move, getting the pick-six for the clinching points.

“The defense has been amazing all year, and I’ve got to give it to them,” Reisig said. “They had some major stops at crucial times, and they made it happen.”

Reisig finished the game by completing 8-of-11 passes for 79 yards. The Trojans also got a boost from the return of Carroll and Stanford, both of whom were injured in their first-round playoff win against Norman North and sat out the semifinal win against Mustang.

Carroll rushed for 147 yards on 27 carries, with Stanford adding 100 yards on eight carries. For the game, the Trojans rushed for 290 yards while adding 87 yards passing.

Union senior quarterback Rovaughn Banks – who began the season at tailback before being moved to quarterback during district play – completed four passes for 151 yards, including two first-quarter touchdowns.

On the very first play from scrimmage, after Paskvan booted a touchback into the end zone, Banks went to his right and spotted Makhai Belt racing down the sideline, releasing the pass.

Belt caught it on the run near midfield and outraced the Jenks secondary for an 80-yard touchdown just 12 seconds into the game.

Union then went for two points and got it, a run from Jakyri Jenkins, as the Redhawks took an 8-0 lead.

Banks threw his second TD pass of the first quarter one play after Union’s Jamori Ray picked off a pass and returned it to the Trojan 43. This time, it went to Da’Monn Sanders, who caught Banks’ pass near the 20 and dashed into the end zone.

TJ Cowan’s PAT upped the Union advantage to 15-0 with 1:49 left in the opening quarter.

“We really didn’t make adjustments,” Riggs said. “We had a couple of busts on the first play; we bit on the first move and it was a double-move, and great play call for the first play of the game. The other touchdown, we had a bust, we didn’t play clean on that play, and that good teams are going to take advantage when you don’t play clean and they did on those two plays.

“But real proud of our defense; they played so well all year and came through this game as well.”

It was the first time Union and Jenks squared off in a title game since 2014, and it was the 12th such instance. The Trojans now hold a 7-4 edge in championship games played against their archrival.