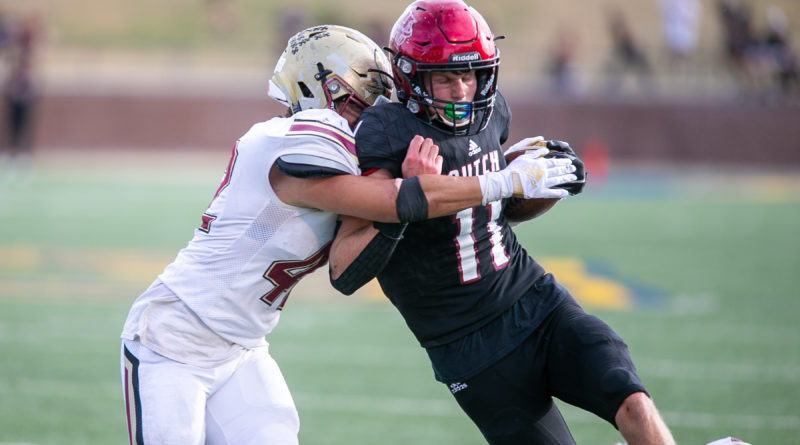 Still, that might not have been Roush’s most important catch on the afternoon.

That came with 11 seconds left, as Roush – playing free safety – stopped a last-ditch Lincoln Christian drive by intercepting a pass in the end zone. That allowed the Dutch to hang on for a 24-16 win at Chad Richison Stadium, and in the process, enabled Holland Hall to repeat as 3A state champions.

It was the lone turnover in the game, and it capped a strong day for Holland Hall’s defense. The Dutch (13-1) held Brown, a Central Michigan commit, to 87 yards on five completions.

The interception also put the literal storybook ending for Roush, a senior.

Roush moved to quarterback late in Holland Hall’s lone defeat, a late October loss to Verdigris that snapped a 20-game win streak for the Dutch. He took over when the regular quarterback, sophomore Kordell Gouldsby, suffered a season-ending injury.

But Roush proved to be up to the challenge and helped the Dutch during their run to the repeat title. In a rematch against Verdigris in last week’s 3A semifinal, he threw three first-half touchdown passes and added a TD run as Holland Hall avenged that earlier loss with a decisive 35-6 win.

Then on Friday, Roush threw two touchdown passes while completing 8-of-11 attempts for 123 yards. He even shared the team lead in tackles with 10, along with junior lineman Parker Jenney.

“I thought (Roush) just played terrific; he is a special competitor,” Holland Hall coach Tag Gross said. “He’s made plays like that all year for us, especially on defense, but I thought that (Friday) at quarterback, he really handled himself well.”

Oh, and Roush showed off his receiver skills with the catch on a trick play late in the first half.

With the Dutch leading, 10-7, they advanced to the Bulldogs’ 2-yard line. Roush handed the ball off to tailback Zane Woodham, who promptly pitched it to receiver NuNu Campbell.

Campbell then flipped the ball to Roush, who was wide open in the end zone, which completed a five-play 74-yard drive. Magnus Lepak added the PAT for a 17-7 lead with 2:55 left in the first half.

“I wasn’t necessarily happy; I was more worried about somebody coming off the edge and either jumping and tipping it or knocking me over,” said Campbell, who also plays cornerback and is a Tulsa commit.

“But I saw (Roush) open, I saw the safety went inside so I just floated it to the top and keeping it long enough where he could have got it like he did, so I wasn’t really worried after the play started.”

Roush was also a bit shocked at first the play was going to be called to him.

“When (Gross) called the play, it was on my wristband and I looked at it and I was like, ‘No way,’ like this has to be a mistake,” Roush said. “Then as soon as I hand the ball to Zane, their guy at the end just started taking off and I was like, ‘Tuddy.’ I knew it; as soon as that happened, I was like, that is a touchdown.”

The two then hooked up again late in the third quarter, this time in a more conventional manner.

On a third-and-1 from the LC 16, Roush fired a strike to the corner of the end zone, with Campbell hauling it in as the Dutch built a 24-10 advantage.

“Ethan’s my brother, and being that I threw the pass to him and caught one from him in the state game is more than surreal and I’m grateful; I’m really grateful,” Campbell said. “But one thing about Ethan is he (was shifted) to quarterback and stepped up and didn’t complain not one time.

“Our offense at the end of the game, we got kind of confused, and he kept all of our heads right, he kept us in the right mind and he’s a great leader.”

The Bulldogs (13-1) made things interesting with 5:18 left, making it a one-possession game as tailback Easton Rogers capped an 11-play 93-yard drive with a 3-yard plunge into the end zone. But the PAT kick was blocked by Tre Carter, keeping Holland Hall’s lead at eight.

Lincoln’s defense then forced the Dutch to punt on the next series, and the Bulldogs took over at their own 21 with 2:15 left and no time outs.

Brown helped move the Bulldogs down the field, completing two third-down passes for first downs into Dutch territory. Holland Hall was then flagged for pass interference on fourth down, giving LC the ball at the 30 with 18 seconds left.

But on the next play, Roush was there in the end zone to stop the Bulldogs’ late comeback attempt.

It was also the second straight season the Dutch beat the Bulldogs to win the 3A gold ball.

“We felt like we could run the ball and be consistent running the ball. The second half, we got a little out of rhythm in the fourth quarter, but I thought the offense played well. I thought defensively, we were really solid.”

Holland Hall received the opening kickoff and proceeded to put together a lengthy drive. The Dutch ran 15 plays and used up more than seven minutes off the clock.

However, the drive stalled, and Lepak came on to kick a field goal. His try from 32 yards out split the uprights, putting the Dutch in front, 3-0, with 4:38 left in the opening quarter.

Lincoln Christian then put together a long drive on its opening series, using up the remainder of the first-quarter clock. The Bulldogs drove inside the Dutch 10 before stalling themselves, with Holland Hall defensive back Hunt Heldebrand breaking up a third-down pass in the end zone.

But on the Bulldogs’ field-goal attempt, the kick was missed.

Holland Hall promptly moved 80 yards in seven plays to build a 10-0 advantage. The touchdown came on a fourth-down play.

From the LC 25, Roush launched a deep pass toward the end zone. Heldebrand, playing receiver, got a step ahead of his defender and made a one-handed grab for the score.

“I think it was probably the greatest play of my life,” Heldebrand said.

“We had something else called; Ethan made the check at the line and then it gave me the seam route, and Ethan threw a great ball, I was able to get a hand on it and reel it in for the touchdown. It was just a great play.”

LC responded on its next series, scoring a TD on a fourth-down play of its own. Brown took the snap on fourth-and-1 from the Dutch 43 and found open spaces, going in for the six points.

Drew Lancaster’s PAT cut the Holland Hall lead to 10-7 with 5:05 left in the second quarter.

But the Dutch regained a 10-point advantage on their next possession, a five-play 74-yard series that was capped by the trick play pass from Campbell to Roush.

Woodham rushed for 131 yards on 16 carries, all coming in the first half as he didn’t play in the second half due to an injury.

Along with his 87 yards through the air, Brown rushed for 176 yards on 28 carries with his TD. Rogers added 56 yards rushing on 12 carries while catching two passes for 44 yards.