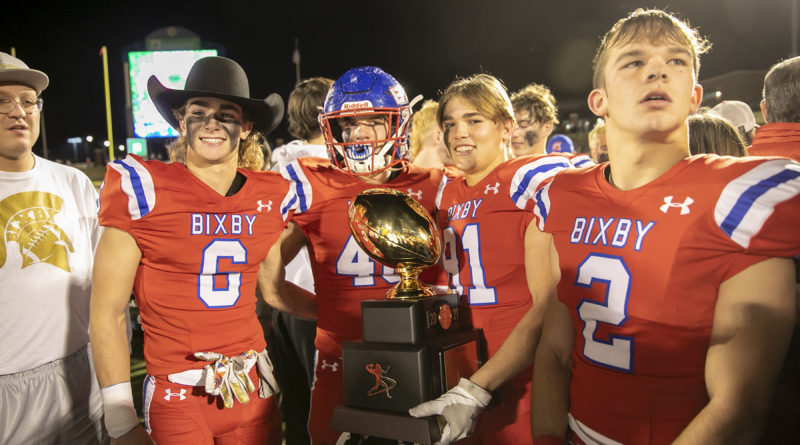 When his number was called on the Spartans’ first offensive play in Thursday’s 6AII championship game, Solomon made sure he hung on to the ball.

Solomon caught a 76-yard touchdown on a halfback pass from Braylin Presley to put the Spartans in front to stay. Solomon later caught two more touchdown passes, and Presley had three rushing TDs to cap a record-setting night for the Spartans.

Bixby claimed its fourth straight 6AII championship with a 63-14 win.

“It feels super amazing, especially coming off of last year’s state game,” said Solomon, a senior receiver/defensive back. “I didn’t have a good game; I gave up a touchdown playing man, and then I dropped one in the end zone. It was definitely not a good night, but I’m glad I came out here (Thursday) and fixed it.”

With Thursday’s win, the Spartans (13-0) also set a new state 11-man record with their 49th consecutive win, breaking the previous mark of 48 originally set by Wagoner in 2017.

“We didn’t even know we were close until this summer, when we had a chance to talk to (Wagoner coach Dale) Condict and he had mentioned it,” Bixby coach Loren Montgomery said. “I was like, well, holy cow, I hadn’t thought about that, because you kind of get into the routine of one game at a time.

The last time Bixby lost a game was the 2018 season opener, 28-14 to Jenks. Bixby then reeled off wins in each of the next 11 games to claim the first of its four straight 6AII championships.

While Bixby will go for its 50th straight win in the 2022 season opener against Owasso, one streak did end Thursday. The Spartans will move up to Class 6AI next season, denying them the opportunity to capture a fifth straight 6AII crown.

“Our senior class is probably one of the most focused we’ve ever been,” Presley said. “It was a great senior class and I think it was one of the best Coach Montgomery’s ever had, but regardless of that fact, we just tried to stay as focused and as resilient as we can.”

As a team, Bixby rushed for 322 yards and passed for 302 more. The Spartans finished Thursday’s game with 794 total points on the season, averaging 61.1 points per contest.

Bixby’s defense held the Antlers (10-3) to 43 yards total offense and three first downs in the first half while intercepting three passes. The Spartans forced six first-half punts as well.

“I think what you saw (Thursday) was what you’ve seen the last 13 weeks of this season,” said senior linebacker Jack Puckett, who lead the team in tackles with eight along with one sack and one quarterback pressure.

“We just worked our butt off and played really hard, set the tone for this team, and didn’t let up on it either. We played hard-nosed all night and it paid off.”

Montgomery had one word to describe his team’s defensive performance.

“Those guys pin their ears back and played incredibly hard, flew around to the football and I don’t know that the other team made many first downs in the first half.”

Presley, an Oklahoma State commit, rushed for three touchdowns and threw a touchdown pass. Presley had 171 yards on 16 carries and caught five passes for 20 yards.

He also scored his 100th career touchdown in the game, finishing with 102, and became the Spartans’ all-time leading rusher when he broke loose for a 94-yard TD late in the opening half.

“Emotional (to have those accomplishments), but I knew we could get it done with this line, with this team, with everything,” Presley said. “I tried not to think about it going into this game, but I knew in the back of my mind we could get the rushing record.”

Solomon caught four passes for 141 yards, three for touchdowns. He also had five tackles, a sack and a quarterback pressure on defense.

But it was Solomon’s first touchdown that set the tone for the eventual coronation to come for Bixby.

Deer Creek received the opening kickoff but went three-and-out. The Antlers punted to the Spartans, who took over at their own 24-yard line.

On the ensuing snap, quarterback Christian Burke handed off to Presley, who immediately released a short pass. Solomon grabbed it near his 40 and went down the sideline untouched, completing a 76-yard catch and run.

“We knew it was going to be a risky play; there were some things that could go wrong with it, but we also knew if it happened to be there, it could be really really big and start the game off right,” Montgomery said. “Worst case scenario, if it wasn’t there, the ball’s still in the best player in the state’s hands, so maybe the risk wasn’t all that great.”

With memories of last season’s title game still fresh in his mind, Solomon just wanted to hang on to the ball.

“(Offensive coordinator Tyler) Schneider, he does a good job of organizing like our first 20-ish plays maybe,” Solomon said. “We ran them for the whole two weeks we had been practicing for this game, and I knew I was going to get the ball, I had pretty good confidence I was going to score and it happened.

“It was definitely butterflies (prior to the catch), I was nervous for sure, but once I secured it, I know I can outrun everyone else, so I felt pretty good.”

Following the trick play TD, Connor Nolan’s PAT made it 7-0 Spartans just 1:50 into the contest.

Three plays later, the Spartan defense struck, as linebacker Beau Bertelli picked off a pass at the Antlers’ 30, returning it 18 yards to the 12.

The Spartans actually had to punt on their next three possessions. But Deer Creek was unable to move the ball on Bixby’s defense.

Bixby began pulling away midway through the second quarter.

The Spartans completed an 11-play 83-yard drive that ended when Presley dashed into the end zone from 11 yards out. Bixby missed the PAT, but had a 20-0 lead with 6:06 left until halftime.

Deer Creek got its initial first down by successfully executing a fake punt. But on the very next play, Bixby’s Cale Fugate picked off a pass at midfield.

The Spartans needed five plays to capitalize on the miscue. Solomon got his second TD catch, a 23-yarder from Burke, followed by a Connor Kirby rush for two points, extending the lead to 28-0 with 2:26 left in the half.

After forcing Deer Creek to punt, the Spartans took over at their own 6 in the waning moments before intermission. No problem, though, as Presley sped down the left sideline for a 94-yard TD with 38 seconds to go.

Nolan’s PAT capped the first-half scoring for a 35-0 Spartan lead.

Bixby then took the second half kickoff and needed five plays to reach the end zone once more to make it 42-0. And Solomon got the hat trick with his third TD reception, hauling in a 35-yard pass from Kirby.

Deer Creek finally got on the board with 5:50 remaining in the third, as Bryson Rouse picked off a pass and returned it 25 yards. Grayson Miller added the extra point, cutting Bixby’s lead to 35, 42-7.

The Spartans responded after the pick-six with a 15-play, 80-yard drive. Junior tailback Jersey Robb’s 5-yard run capped things, as Bixby’s lead went back to 42 points, 49-7, with two minutes left in the third.

Just 52 seconds later, Bixby got a pick-six of its own, as Jakeb Snyder stepped in front of a pass and raced in untouched from 39 yards out. Nolan’s PAT made it a 49-point lead, 56-7, for the team assured of their 49th straight victory.

Bixby’s final TD came on a 16-yard run by Zach Blankenship with 8:57 left.

Rouse accounted for both Antler touchdowns, also adding a 6-yard run early in the fourth quarter.

The Spartans, especially the seniors, reflected on the magnitude of being able to set the state record for consecutive wins while never having lost a championship game.

“It was a great feeling,” Puckett said. “It’s insane when you really write it down on paper, to think that I was part of all of that.

“I’m extremely thankful to have been part of all of that, and who knows when that’s ever going to be touched again.”