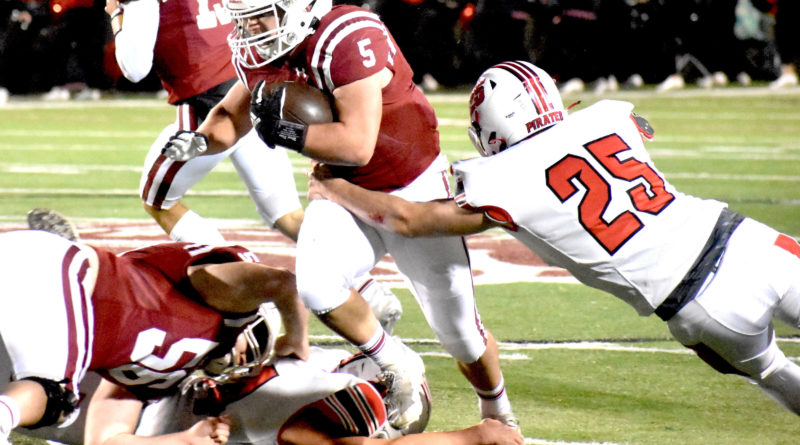 JENKS — Most winning teams are quick to thank their teammates and coaches right after a game.

Tuttle’s players and coaches took it one step further following the Tigers’ hard-fought 28-21 Class 4A semifinal win against Poteau on Friday night at Allan Trimble Stadium. They immediately pointed out the play of their scout team in practices leading up to Friday’s win.

“A big shout-out to our scout team for running those plays; most teams get beat because their scout teams can’t do stuff like that, so it’s all about them,” said senior receiver Nathan Ross, who caught two touchdown passes. “It’s all about team; we work together and now that’s where we’re ending up, the state finals.”

Tuttle (13-0) will now get to play for that gold ball as the Tigers take on Clinton for the 4A title on Friday, Dec. 3 in Edmond. Clinton beat Elk City in Friday’s other 4A semifinal.

“Our scout team did an unbelievable job all week running that (Poteau) offense, as good as you can get as far as the look for our team and that was really important for us. Just proud of them, man.”

Tuttle broke a 21-all score with 2:04 left in the third quarter, eight plays after Poteau tied it when sophomore Dax Collins darted 75 yards into the end zone for his second long TD run on the night, which came on a fourth-and-short.

The Tigers’ go-ahead score also came on fourth down – a fourth-and-3 from the Pirates’ 30-yard line, to be exact. Junior quarterback Mason Dennis found his target, Ross, near the 20 and Ross did the rest, breaking several tacklers to reach the end zone.

“I caught it and the first thing I thought was just cover the ball up,” Ross said. “The (defender) hit my feet and I was like, ‘All right, just keep pushing.’ He spun off and I saw the guy outside and I was like, ‘OK, I’m going to cut in.’

“(Fellow receiver) Mason Stokes was actually right there and I heard him, right as I broke the second tackle, I heard him say, ‘Don’t fall, go get in the end zone,’ and it happened, so it was just stuff like that. My teammates keep me going most of the time.”

Senior Kana Wong then kicked the PAT for the seven-point lead.

The eventual go-ahead TD was the third on the night for Dennis, who finished with 11-of-19 completions for 193 yards and no interceptions. He threw passes to seven different receivers.

“Our run game, it was still there, but we had to call on the pass game,” Dennis said. “We executed, and that’s why we won.”

But to preserve the win, Tuttle relied on its vaunted defense and run game.

The Tigers stopped the Pirates a yard short of the first down on a fourth-down attempt early in the final quarter. On Poteau’s next series, Tuttle senior cornerback Dillon Ballard picked off a pass.

Then when the Pirates got the ball back after forcing a punt, Tuttle linebacker Gunner Kerr came up with a sack deep in Poteau territory. The Pirates were forced to punt it away with 4:11 left.

Poteau never got the ball back again. The Tigers converted three first downs, all on the running of senior Canon West, to run out the clock.

West finished the night with 205 yards on 43 carries with a touchdown.

“He’s had at least 30 carries our last three or four games and doesn’t mind that,” Brad Ballard said of West. “He’s a guy that relishes that and just excited about that.”

Poteau (11-2), which was bidding to return to play for a title since winning 4A in 2019, put an immediate jolt on the Tigers.

On just the second play of the night, as Collins took a handoff on a jet sweep and down the left sideline for a 73-yard touchdown. Ethan McBee’s PAT gave the Pirates a 7-0 lead just 46 seconds into the contest.

Tuttle answered on its opening series, going 60 yards in nine plays. The drive ended when Dennis found freshman Brady MacAdoo on a wheel route, and MacAdoo took it in from 19 yards out.

Wong added the PAT, tying the score at 7-all with 8:37 left in the opening quarter.

The Tigers took their first lead of the night four plays in the second quarter. West took a direct snap in the Wildcat and rambled 9 yards for the score to complete an eight-play 64-yard series, all on the ground.

Tuttle’s defense then stopped Poteau on the next series, forcing a punt. But the punt deflected off a Tigers’ player, and Poteau’s Kix Fenton made the recovery at the Tuttle 13.

It took the Pirates six plays to take advantage. From the 1-yard line, senior Dean Odom took the snap, found a hole on the right side and plunged in for the score. McBee tied it up with the PAT, 14-all, with 5:37 left in the opening half.

The Tigers regained the lead with 26 seconds left until the break, going 79 yards in six plays. Dennis had his second TD toss of the night, firing a ball into the end zone. Against double coverage, Ross jumped high to grab it for the touchdown.

“I saw the ball and I figured, I might as well go play it; it looks like it was going over their heads,” said Ross, who caught three passes for 67 yards. “So might as well jump and try my odds; if I didn’t catch it, we’ll just try again.”

Wong connected on his third PAT, giving Tuttle a 21-14 advantage, which was the eventual halftime score.

The Tigers finished with 453 yards of total offense, 260 of that rushing. Poteau had 205 yards rushing and 19 passing.

Collins rushed for 153 yards on nine carries with his two TDs. In his final game for the Pirates, senior tailback and leading rusher Todd Mattox was held to 48 yards on 17 carries.

The Tigers now focus on one more game as they seek their first gold ball since 2018, when they beat Poteau in the semifinals that season, also at Jenks.

“Like Nathan said, big shout-out to the scout team; they had one of their best weeks and our (offensive) line, they blocked their butts off out there,” Dennis said. “They’ve been blocking all year and Canon West, he’s been good all year and he was great again (Friday). And Nathan had the best game of his life right here; that was a great game.”