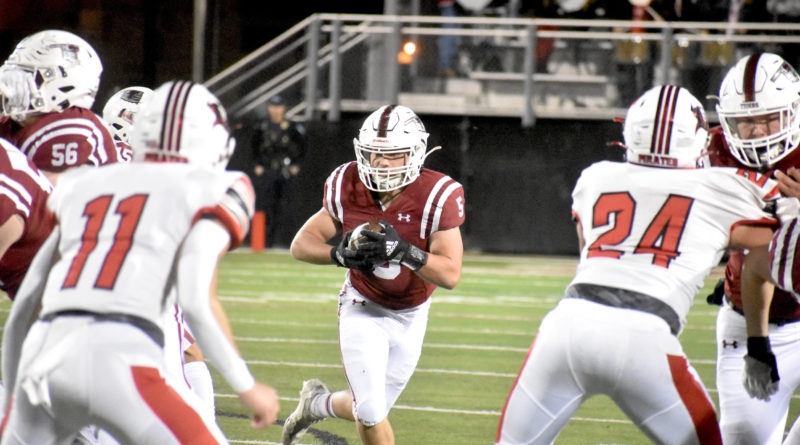 The Spartans go for their fourth straight 6AII title, as well as setting a state 11-man record with their 49th consecutive win, as they face Edmond Deer Creek on Dec. 2.

Jenks will take on “Backyard Bowl” rival Tulsa Union on Dec. 4 in Edmond for the 6AI title.

Union gets a chance to avenge its only defeat, to Jenks, when the two archrivals square off on Dec. 4 for the 6AI championship.

Tuttle got three touchdown passes from Mason Dennis, as well as a 205-yard rushing performance from Canon West, to advance to next week’s 4A title game against Clinton.

Junior tailback Erik McCarty rushed for 203 yards on 20 carries and four TDs as the Buffaloes will play for the gold ball in 5A next week.

Quarterback Max Brown took a keeper into the end zone with 12 seconds left to lift the Bulldogs into the 3A title game.

There will be a new 5A state champion, as the Cardinals scored the go-ahead TD with 1:58 left on Brayden Gilkey’s 4-yard run, ending the Titans’ run of five straight titles.

The Chargers were defeated by Lincoln Christian for the third straight season in the semifinals.

Quarterback Ethan Roush threw for three first-half TDs, added a 70-yard TD run in the fourth quarter and also intercepted a pass as the Dutch avenged a regular-season loss to Verdigris to win Friday’s 3A semifinal.

The Warriors took care of business on the road in their 2A quarterfinal and will now take on Beggs in next week’s 2A semifinals.

The Antlers will try to be the team to derail Bixby’s run at history in the 6AII title game on Thursday night.

The Highlanders’ season came to an end in the 5A semifinals on Friday night.

The Pioneers were defeated by Bixby in last week’s 6AII semifinals.

The Tigers were defeated by Tulsa Union in last week’s 6AI semifinals.

The Yellowjackets were defeated two weeks ago by Edmond Deer Creek in the opening round of the 6AII playoffs.

The Hornets’ season ended two weeks ago with a loss to Stillwater in the first round of the 6AII playoffs.

OCS had no answer to Eufaula standout Khelil Deere, who had three touchdown receptions and picked off four passes on defense as the Ironheads won in the 2A quarterfinals.

The Rams’ season ended with a loss to Broken Arrow in the first round of the 6AI playoffs two weeks ago.

Despite the Pirates’ loss in the 4A semifinals, sophomore Dax Collins was a bright spot, rushing for 153 yards and TD runs covering 73 and 75 yards.

The Cardinals were unable to beat the Dutch for the second time this season, as Holland Hall got revenge for Verdigris breaking the 20-game win streak by the Dutch in the regular season.

The Eagles’ season concluded two weeks ago with a loss to Sand Springs in the first round of the 6AII playoffs.

Carl Albert’s 22-game playoff winning streak came to an end with a loss in Friday’s 5A semifinals.

The Tigers’ season ended last week with a loss to Midwest City Carl Albert in the 5A quarterfinals.

Cashion is two wins away from a repeat Class A state championship, as the Wildcats took care of business on the road in their quarterfinal win.

The Demons built a 28-0 halftime lead as they cruised into the 2A semifinals with the decisive quarterfinal win at home.