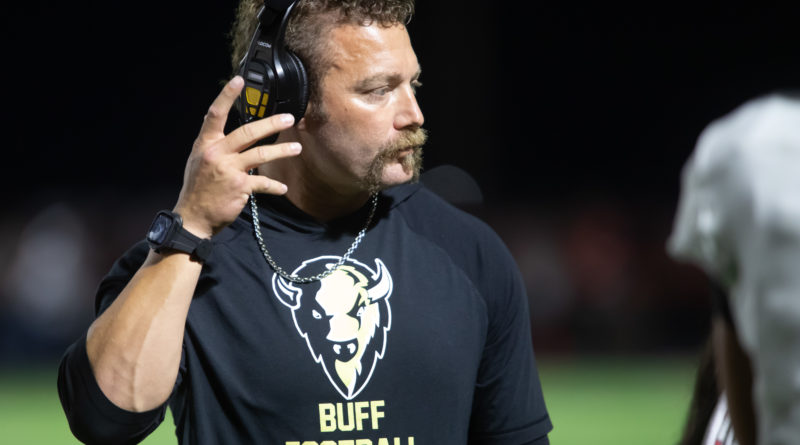 They remembered the buffalo.

A year ago, McAlester players saw Coweta players pose for pictures alongside an image of McAlester’s buffalo mascot after the Tigers rallied in the second half to stun the Buffaloes on their home field.

It was a moment that was seared into the minds of the McAlester players ever since. In the rematch on Oct. 14, with both the Buffaloes and Coweta came in sporting sparkling 6-0 records, McAlester did get its revenge.

The Buffaloes kept Coweta out of the end zone and allowed only a second-quarter safety in a decisive 33-2 win. It was perhaps the most defining win this season for the Buffaloes.

“We definitely thought about that a lot, just trying to get that revenge back from last year,” senior defensive back Killian Barnes said. “And last year we were actually up 14-0 at halftime, and we didn’t do anything on offense in the second half, and they came back and beat us. … We knew what we wanted to do (in the rematch) and we did it.”

And yes, after the game, several Buffaloes saw Coweta’s tiger logo emblazoned on the wall of the field house and proceeded to smile for the cameras in front of the tiger.

The Buffaloes have kept winning since that night, raising their record to 12-0. Now, they have a chance to erase another infamous memory from last season that continues to fuel them.

For the second straight season, McAlester has made it to the 5A semifinals. This time, the Buffaloes want to clear that hurdle and make it to Edmond next week to play for a gold ball.

They almost had that opportunity a year ago, when they took on Bishop McGuinness. But with 19 seconds left, the Fighting Irish swiped that opportunity instead with a go-ahead touchdown, sending McAlester home with a bitter 28-21 defeat.

A defeat that has been on the Buffaloes’ minds ever since.

“The fact that we were so close last year, and it was stolen from us, and we let up early last year,” said McAlester junior Erik McCarty, one of the state’s top running backs. “We know what we can do, and we know we can go all the way, we’ve just got to keep our foot on the gas whenever we’re up and just keep pounding the ball, just keep working, keep grinding.

While it won’t be a rematch with McGuinness, in an interesting sort of way, there’s still a shot at revenge.

On Friday, McAlester will play Lawton MacArthur. The last time the Buffaloes played the Highlanders, it was also in the 5A semifinals, in 2014. Lawton Mac came away with a wild 50-49 win.

It was the closest McAlester would get to having a chance to play for the title since then. Until last season, of course, and obviously in the here and now.

“Maybe we can get that one done and get to the finals and get over that hump,” McAlester coach Forrest Mazey said.

“Them seeing that they were 19 seconds away from the finals, I think it burns deep. It would be something big.”

No doubt it would also be big for Mazey.

He’s came close before, taking Poteau to the semifinals as coach in 2015 and again in 2018. Then currently two straight seasons with McAlester.

Winning on Friday would also mean another monumental step in the trajectory of both Mazey and McAlester. Mazey left a good situation at Poteau after the 2018 season to take over a Buffaloes program coming off 3-7 and 4-6 finishes in 2017 and 2018, respectively.

“It was just a situation where you know the history of that program, a step up in classification, a little bit closer to my family and my wife’s family from the grandparents,” Mazey said. “It was just nice to be close, have them come watch games, have them come support and then being able to come to my kids’ little league games is big, too.

“That’s worked out for the best and it’s been wonderful.”

In Mazey’s first season with the Buffaloes, they went 6-5 and made the playoffs, reaching the 5A quarterfinals. But that same year, his old club, Poteau, went on to win its first state championship, beating Weatherford for the 4A gold ball.

But Mazey harbors no regrets about leaving Poteau.

“No (regrets); I knew what I was leaving, a good team, a good group of kids, a good group of coaches, but sometimes you’ve got to make those personal decisions and what’s best for the whole group and not just yourself,” he said.

Last season, McAlester made the breakthrough, going 11-3 and barely missing the chance to play for a 5A title. And now 2021, with the Buffaloes, no pun intended, stampeding past most of their foes and taking a perfect record with them to Noble, site of Friday’s semifinal against Lawton Mac.

“He came in here, changed the whole mindset,” McCarty said. “He’s been my only head coach in high school and he’s changed the mindset.

“I love that man, and the reason I am as good as I am today is because of him; he helps me so much, he teaches me so many things, the winning and all of that, it all centers around him. He’s changed this team so much and I love that guy so much.”

Now, one year after seeing a chance at playing for a gold ball slip away with 19 seconds left, the Buffaloes are right back in this position, vying to make it to Edmond to play for a 5A championship next week.

“We knew we could win last year, but knowing we can win at the level we’re winning at is what we know, and that’s why we work,” Mazey said.

A win on Friday sends the Buffaloes into their first championship game since 2013. Another step taken, another chance to erase a bad memory from a year ago.

And perhaps another opportunity for the Buffaloes to be ready for their postgame close-up.