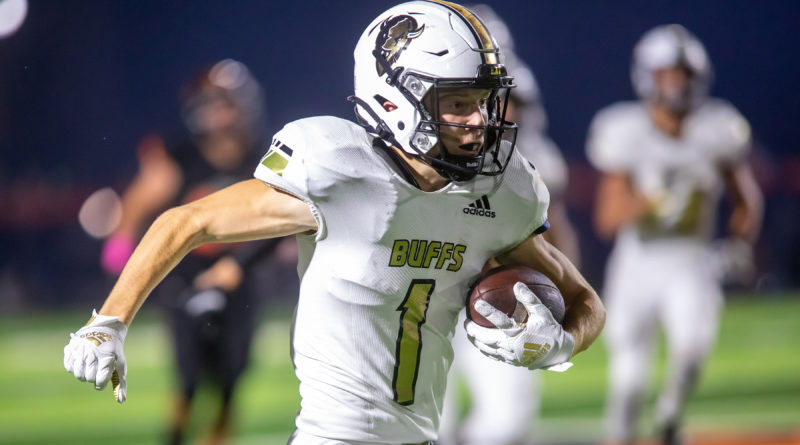 Those left standing in classes 6AI and 6AII will be enjoying Thanksgiving break.

But it won’t be a holiday for those in the lower classifications. For those in 5A through 3A, the day after Thanksgiving will decide those who will advance to Edmond for next week’s title games, joining the two combatants in both 6AI and 6AII.

Here are the Top 10 high school football games to watch in Oklahoma this week.

Something’s gotta give in this compelling 5A semifinal matchup.

On one side is Collinsville, which brings a perfect 12-0 record into Friday’s game. The Cardinals are aiming for their first trip to the state finals since 2015.

To do that, though, they must find a way to solve the Titans’ playoff mystique.

Carl Albert (10-2) has won the past five state titles and brings a current 22-game playoff win streak into Friday’s matchup. In addition, the Titans are 17-0 all-time in state semifinal contests.

The return of quarterback Andrew Carney, who missed several games in the regular season due to an injury, has given Collinsville an extra dimension on offense. In last week’s quarterfinal win against Bishop McGuinness, Carney rushed for 325 yards and five touchdowns, with regular tailback Brayden Gilkey adding 277 yards and three TDs.

The Titans have beaten Collinsville in two semifinal games over the past three years.

Friday’s other 5A semifinal also brings an intriguing matchup of running backs.

The Buffaloes have junior tailback Erik McCarty, who has rushed for more than 1,500 yards and 30 touchdowns. He had 193 yards and two TDs last week as McAlester (12-0) got past Guthrie, 27-21, in its quarterfinal.

For the Highlanders, it’s senior Isaiah Gray, who totaled nearly 1,900 yards in the regular season along with 32 touchdowns. Gray scored three touchdowns last week as Lawton Mac (11-1) rolled in its quarterfinal against Pryor, 40-0.

McAlester is seeking its first trip to the title game since 2013, while MacArthur is vying to play its first championship game since winning 5A in 2014. The Highlanders beat McAlester in the semifinals that season, 50-49, which was the last time the two teams played until this week.

MacArthur does have one advantage on Friday. This will be the second time this season the Highlanders have played at Noble, as Lawton Mac beat Noble in a 5A-1 matchup in October.

Tuttle at Poteau (game at Jenks)

If one likes an old-school, grind-it-out style of football, Friday’s 4A semifinal at Allan Trimble Stadium might definitely be classified as one.

Both the Tigers and Pirates employ a run-first approach. The Tigers (12-0) gained almost 250 yards in last week’s 28-0 quarterfinal win against defending 4A champion Wagoner, with tailback Canon West accounting for 210 of those yards along with three touchdowns.

Both teams’ rushing attacks also must find a way to get past the other’s defense. The Tigers have allowed 69 total points all season, while Poteau has had two shutouts and two games holding opponents to six points during a current 10-game winning streak.

It will be the first game between the Tigers and Pirates since the 2018 4A semifinals, also at Jenks. Tuttle won that matchup, 21-11, en route to winning the state title. But Poteau went back to Jenks the following season and beat Wagoner in the 4A semifinals as the Pirates eventually won their first state championship.

A pair of traditional 4A-1 district rivals square off in the other 4A semifinal Friday night.

Clinton was expected by many to get this far, especially with the Red Tornadoes coming off an appearance in last season’s 4A championship game.

The Red Tornadoes (11-1) have been dominant again this season, losing just once to undefeated Heritage Hall in their second game. Clinton has allowed no more than 14 points in a game during district play and in the playoffs, including a 30-7 win last week against Bristow in the quarterfinals.

Elk City (10-2) has been one of the state’s biggest surprises. Two seasons after going 0-10 for the second straight season, the Elks have reached the semifinals with a pair of road wins, beating once-beaten Cushing in the first round and once-beaten Grove in the quarterfinals.

The Elks also have a chance to avenge one of their two defeats, which was to Clinton. The Red Tornadoes posted a 34-0 decision on Oct. 29.

A pair of undefeated squads collide in this compelling 3A semifinal, but the Chargers and Bulldogs aren’t strangers to one another.

This will be the fourth consecutive season the two teams have squared off in the semifinals. Lincoln Christian has won the last two games in that span, including 35-27 in 2020.

Both teams also bring in impressive quarterbacks. Heritage Hall’s Will Paque has thrown for 2,637 yards and 33 TDs, six coming in last week’s quarterfinal win against Berryhill, which tied a single-game school record.

For Lincoln Christian, Central Michigan commit Max Brown has been the key to the Bulldogs’ offense. Brown has 2,573 yards through the air and 40 TDs, while adding more than 1,000 yards rushing and 17 TDs.

But quarterbacks aren’t the only dynamic playmakers on either side. The Chargers also bring boast senior receiver Gavin Freeman, a Texas Tech commit, who has nearly 1,350 yards in receiving and 21 total offensive touchdowns. Lincoln has junior Easton Rogers, who has accounted for nearly 750 yards of total offense and 14 TDs.

A rematch of a game played in Week 9 is the focus of this 3A semifinal between District 3A-4 foes.

In that game, played at Verdigris, the Cardinals (11-1) pulled off a 12-7 win, which snapped Holland Hall’s 20-game winning streak.

The Dutch (11-1) have righted the ship since then, averaging 51.7 points in winning three straight games, including a 34-14 decision against Perkins-Tryon in the quarterfinals.

Holland Hall also has found a revelation in Ethan Roush, who moved from receiver to quarterback after its starter was injured in the loss to Verdigris. Roush has thrown for nearly 350 yards and five TDs since then.

Verdigris opened the playoffs with back-to-back road games and won both, beating Seminole in the first round and winning at Plainview in last week’s quarterfinal. Quarterback Dylan White has thrown for more than 2,250 yards and 18 TDs.

The undefeated Warriors, one of the favorites to win 2A, have to travel to play Friday’s quarterfinal matchup against a hot Eagles squad.

Washington is coming off an impressive 52-21 win against Jones, which featured quarterback Carson May, an Iowa commit. But the offensive star that night was tailback Cole Scott, who had 259 yards on 40 carries and scored three TDs, as the Warriors’ defense held May to 216 yards passing.

Now, the Warriors’ defense faces another impressive signal-caller in Rejoice Christian’s Chance Wilson. Wilson has passed for more than 3,800 yards and 58 TDs this season, and in the Eagles’ two playoff wins, he had 711 yards and 12 TDs.

Rejoice Christian (11-1) has beaten one team favored to win the gold ball already this season, Class A contender Cashion.

Another undefeated 2A squad has to make a trip to the Tulsa area to play in a quarterfinal game as the 12-0 Outlaws travel to face Cascia Hall.

Marlow is hoping this year’s trip to Green Country goes better than last year. In the quarterfinals last season, Marlow went to Tulsa to play Metro Christian, but was the short end of a 35-31 decision as the Patriots went on to repeat as 2A state champions.

The Outlaws bring one of the more versatile players in the state in senior Jace Gilbert, who plays quarterback and is also the team’s kicker and punter.

In last week’s 38-7 second-round win against Chandler, Gilbert accounted for all 38 points. He threw for three TDs, rushed for two more, kicked five extra points and even had a 30-yard field goal.

Cascia Hall (9-3) is coming off a 33-21 second-round win at Victory Christian, the second time this season the Commandos have defeated the Conquerors. Quarterback Cooper Lai had two rushing TDs, while tailback Ethan Clark rushed for 173 yards and had three TDs.

On Friday, the rematch takes place with the Wildcats making the road trip.

Cashion (11-1) has reeled off 11 straight wins since a season-opening loss to Rejoice Christian. In the playoffs, the Wildcats put up 48 points against Dibble and 55 in a 55-6 win last week against Hooker in the second round.

Woodland (10-2) counters with quarterback Aidan Rhodes, who has passed for 1,176 yards and 15 TDs and rushed for 1,037 yards and 18 TDs. Receiver Jamie Jordan also has more than 500 yards and six TDs, half of those coming last week when the Cougars rallied to win their second-round game at Gore, 20-19, scoring two touchdowns inside the final three minutes.

The Huskies take a nine-game winning streak into their Class A quarterfinal Friday at Elmore City-Pernell.

In its two playoff wins, Pawhuska (10-2) has averaged 48 points. On the season, quarterback Todd Drummond has thrown for more than 3,100 yards and 48 TDs while adding 12 rushing TDs. Receivers Mason Gilkey, an Oklahoma State commit, and Dalton Hurd have combined for nearly 2,000 yards and 34 TDs.

Elmore City-Pernell (12-1) suffered its only defeat in the regular season finale to Ringling. The Badgers have rebounded with a 42-20 first-round playoff win against Oklahoma Christian Academy and then beat Burns Flat-Dill City, 30-8, in last week’s second round.

This will also be the first quarterfinal appearance in school history for the Badgers, while Pawhuska is making its third straight trip to the quarterfinals.