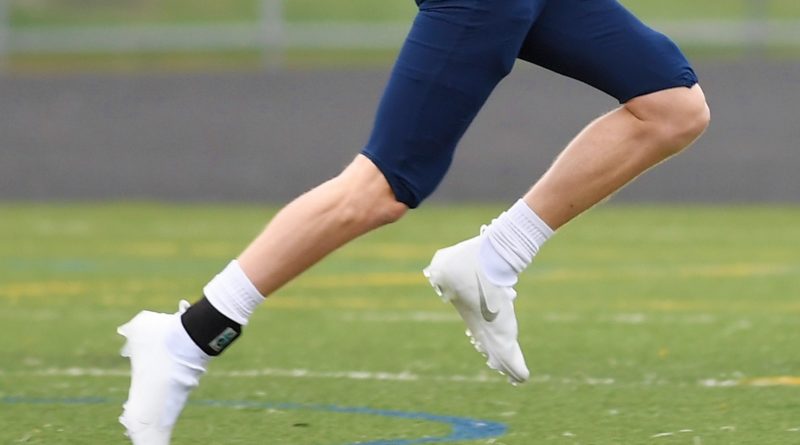 We’re taking a position-by-position look at some of the top players in Oklahoma high school football. This list focuses on the wide receivers.

There are hundreds of standout football players in Oklahoma and these lists are not intended to be comprehensive. Use the comments section to discuss the other wide receivers worthy of fans’ attention in 2021.

One of the state’s more dynamic players, Freeman has been a key cog for the undefeated Chargers. He has caught 55 passes for 1,190 yards and 15 TDs, catching at least one TD pass in all but two of the Chargers’ first 10 games. A Texas Tech commit, Freeman also has four rushing TDs and has taken two punts back to the house as well.

Gilkey, an Oklahoma State commit, has averaged 107.9 receiving yards through his first 10 games for the Huskies. He has 66 catches for 1,079 yards and 17 TDs, 11 of those coming over a four-game stretch. Gilkey caught nine passes for 178 yards and a TD in Pawhuska’s first-round Class A playoff win against Hominy, avenging a regular-season defeat to the Bucks.

Crooks and quarterback Blaze Berlowitz, another junior, made for an impressive combination for the Tigers. In 2021, Crooks caught 93 passes for 1,624 yards and scored 20 touchdowns. In the Tigers’ regular-season finale, a win against Harrah, Crooks had nine receptions for 232 yards and three TDs.

Spears-Jennings, who is also one of the top defensive backs in the state and is an Oklahoma commit, has helped the Tigers’ recent surge into the Class 6AI semifinals. Heading into the semifinals, he has 35 catches for 587 yards and seven TDs.

Gordon had 1,505 yards receiving on 65 catches along with 15 TDs for a Bethel team that qualified for the Class 2A playoffs. He had 11 catches for 208 yards and two TDs in a win against Christian Heritage and also had eight catches for 249 yards and a TD in a loss to a Washington team that started the season 10-0.

Harper had 1,438 yards receiving on 93 catches and 17 TDs for a pass-happy Bears’ offense. Noble made the 5A playoffs and finished in a three-way tie for the 5A-1 district title.

Wardrip was another top target for Bears quarterback Colin Fisher. In 2021, Wardrip hauled in 71 passes for 1,205 yards and found the end zone 11 times.

Belew caught 53 passes for 974 yards and nine TDs for the Tigers, who made the 5A playoffs. He had 13 receptions for 216 yards and a TD in a loss to eventual 4A-3 champion Grove.

Though it was a tough season for the Roughers, Bell was one of the constant standouts. He had 50 receptions for 946 yards and nine TDs. Bell had five catches for 176 yards and two TDs in one of Muskogee’s rare wins, a road triumph at Bartlesville.

Smith has been a versatile playmaker for the Lions, who have advanced to the 4A quarterfinals. Entering the quarterfinal round, he caught 50 passes for 764 yards and nine TDs. He also has touchdowns on rushing, kickoff returns and interception returns.

Though the Tigers won only two ballgames, Martinez still had a fantastic season. He had 1,225 yards receiving on 84 receptions with 12 TDs. In one of Cleveland’s wins, against Mannford, Martinez had 12 receptions for 200 yards and three TDs.

Hill had 71 catches for 1,065 yards and 19 TDs through the opening week of the Class A playoffs for the Bulldogs. In a key late-season win against Mooreland, Hill caught 12 passes for 282 yards and scored four TDs. He also had four TDs in a win against Thomas-Fay-Custer.

Williams was one of the bright spots for a Jaguars’ team that finished 2-8. He had 38 catches for 1,004 yards and nine TDs.

Bishop has 49 receptions for 762 yards and 13 TDs for the Wolverines. In a win against Yale in October, Bishop caught seven passes for 138 yards and two TDs. He also had three TDs on three catches, covering 109 yards, in Garber’s regular-season finale, a win against Olive.

Nagel has also been a go-to target for the Wolverines, who have reached the second round of the Class B playoffs. He has 833 yards receiving on 45 catches and 13 TDs. In a late-season win against Barnsdall, Nagel caught six passes for 189 yards and four TDs.

Thomas averaged 21.4 yards a reception for the Rams this season, 791 yards on 37 receptions with 11 TDs. That included a six-catch 153-yard three-TD performance in Owasso’s win against Norman North in October.

Hammond has been one of the go-to players for the Cardinals, who won their first 11 ballgames en route to appearing in the 5A quarterfinals. He has 1,004 yards receiving on 39 catches with 16 TDs and also has three rushing TDs. Hammond caught three passes for 89 yards and two TDs in Collinsville’s first-round 5A playoff win against Shawnee.

Ford has 817 yards on 57 receptions along with 12 TDs for the Tigers, who won 10 of their first 11 ballgames to reach the 5A quarterfinal round. He had five catches for 121 yards and three TDs in Coweta’s regular season finale, a win against Durant. Ford also has six touchdowns rushing.

Smith has caught 44 passes for 825 yards and 11 TDs for the Wildcats, who qualified for the Class B playoffs. Smith also had 12 rushing touchdowns.

On the season, Barham caught 44 passes for 855 yards and eight TDs for the Trojans, who finished the season 6-4. In the team’s first two games, he combined for 10 catches for 189 yards and had two TDs apiece in wins against Hulbert and Kellyville.

James has caught 38 passes for 857 yards and 13 TDs on the season. In an October win against Apache, he had six catches for 258 yards and three TDs; then the following week, caught five passes for 133 yards and two TDs in a win against Hobart.

Fields had 44 receptions for 894 yards and 13 TDs for the Spartans. He had six catches for 110 yards and three TDs in a win against Capitol Hill; then in losses against two teams that made the 5A playoffs, Noble and El Reno, Fields had seven catches apiece for a combined 307 yards and three touchdowns.

Jackson caught 66 passes for 925 yards and 11 TDs for a Warriors team that reached the 2A playoffs. He had eight catches for 187 yards and two TDs in a win against Sperry and also had eight receptions for 75 yards a week later, a win against Kansas.

Deere has been one of the consistent big-play standouts for the Ironheads, who won the 2A-6 title and have gone 10-1 in reaching the Class 2A second-round playoffs. Deere has caught 25 passes for 502 yards and six TDs. In a key district win against Idabel, Deere caught three passes for 139 yards and two TDs and also returned a punt for another TD.

Blevins has 56 receptions for 833 yards and eight TDs for the Sandites, who have advanced to the Class 6AII semifinals. He had nine catches apiece in two of the Sandites’ first three games, wins against Sapulpa and Ponca City. Blevins also had eight catches for 125 yards and a TD in the regular-season finale, a win against Putnam City West.

Johnson has been a big-play receiver and defensive back for the Broncos, who have made it to the Class 6AI semifinals. Johnson has 41 receptions for 1,007 yards and 12 TDs. He accounted for three touchdowns in Mustangs’ big district win at Owasso. Johnson is also one of the top recruits in the state both in football and in basketball.

Dockins was a big reason for the Lions’ turnaround season. Moore finished the season 7-3 and got a big win at eventual 6AI semifinalist Mustang, though the Lions narrowly missed the playoffs. Dockins caught 37 passes for 631 yards and six TDs. He also had 435 yards rushin and 11 TDs and also returned a kickoff for a TD, which gave him 18 TDs on the season.

Tease emerged as a big-play standout for the Hornets, who reached the 6AII playoffs. He caught 28 passes for 539 yards and eight TDs. He had four catches for 117 yards and a TD in the season opener, a win against Southmoore, and also had five catches for 98 yards and two TDs in a win at Sand Springs.

Malaska emerged as a prime receiver for the Bronchos, who qualified for the 4A playoffs. He caught 25 passes for 408 yards and five TDs. Malaska had three of those TDs in a win against Elgin and also had a three-catch 82-yard performance with a TD in a win against Chickasha.

Scott is a go-to target for the Warriors, who were last season’s 2A state runner-up and has reeled off 11 wins to start 2021. He had two TDs on two catches in Washington’s 2A opening-round playoff win against Comanche. Through the Warriors’ first seven games, Scott caught 21 passes for 437 yards and seven TDs.

Matteson is one of the top two-way standouts in the state, excelling at both receiver and safety for a Saints team that recorded a perfect regular season, and has committed to Army. In the Saints’ 2A playoff opener, a win against Prague, Matteson caught four passes for 110 yards and two TDs. Over the Saints’ first six games, Matteson caught 16 passes for 257 yards and four TDs.

Smith has been a key reason for the Rams being a contender in Class B, going 9-2 entering the second round of the playoffs. Thus far on the season, Smith caught 51 passes for 815 yards and 14 TDs.

In the Timberwolves’ first game this season, Dorney caught six passes for 175 yards and three TDs as they beat crosstown rival Norman. He went on to catch 27 passes for 595 yards and seven TDs through the halfway point of the season. Dorney had 151 yards of total offense with eight catches and a receiving TD in North’s 6AI first-round playoff loss to Jenks.

One of the top basketball recruits in the state, Udoumoh came out for football this season and has become a go-to receiver. He’s also been instrumental in the Conquerors’ rise to the District 2A-7 championship. In fact, in the Conquerors’ come-from-behind 27-26 win against Beggs for the district title, Udoumoh caught four passes for 127 yards, including a 50-yard TD during the team’s fourth-quarter rally.