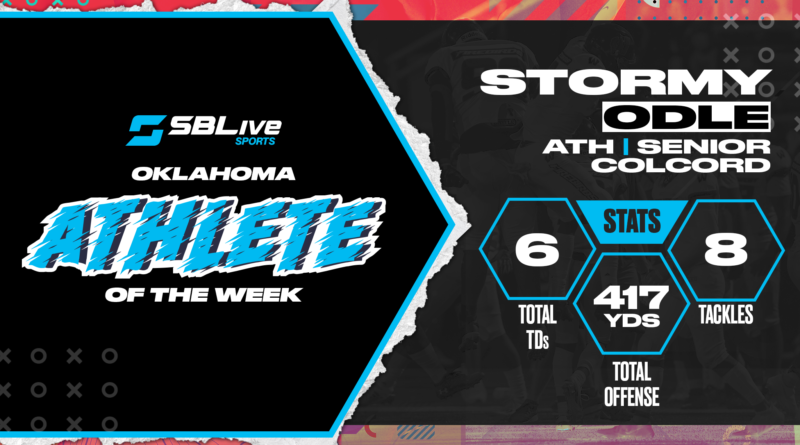 Congratulations to Colcord ATH Stormy Odle for being voted SBLive’s Oklahoma High School Athlete of the Week for Nov. 8-14!

The senior accounted for 417 yards of total offense and six total touchdowns as the Hornets held off Okemah, 53-52. He also had eight tackles on defense.

Odle ran away with this week’s honor, receiving  92.97% of the total vote!

The junior rushed for 96 yards on 10 carries with a touchdown and caught a 63-yard TD pass in the Trojans’ 41-14 win against Norman North.

Ramsey threw two TD passes, including the game-winner with more than five minutes left, as the Tigers rallied to defeat Owasso, 41-40. He also had a 78-yard TD run.

Banks completed 8-of-15 passes for 251 yards and four TDs and added 124 yards rushing with two TDs in the Redhawks’ 59-24 win against Yukon.

Pennington was 13-of-20 passing for 221 yards and two TDs and had the game-winning TD run with less than three minutes left in the Sandites’ 21-17 win at Del City.

Presley returned the opening kickoff 88 yards for a touchdown in the Spartans’ 78-7 win against Putnam City North. He also rushed six times for 82 yards and a TD while adding a TD reception as Bixby recorded its 47th consecutive victory.

Ford caught seven passes for 96 yards and a TD, had two TD runs and returned a kickoff 82 yards for another TD in the Tigers’ 42-14 win against Tahlequah.

Thompson rushed for 185 yards on 30 carries and three touchdowns in the Pioneers’ 35-26 win against Tulsa Booker T. Washington.

Gilkey carried the ball 11 times but rushed for 185 yards and had four touchdowns in the undefeated Cardinals’ 60-13 win against Shawnee.

Brown passed for 215 yards and five TDs and added a touchdown run in the Bulldogs’ 56-6 win against Vinita.

Bedford carried the ball 14 times for 109 yards and scored four touchdowns in the Broncos’ 37-17 win against Edmond Santa Fe.

Hammons rushed for 226 yards on 31 carries and a touchdown as the Bluejays defeated Noble, 40-0.

Taffe rushed for 221 yards and had three touchdowns as the Fighting Irish posted a 56-21 win at Ardmore.

Matteson caught four passes for 110 yards and two TDs and also intercepted two passes, giving him eight on the season, as the Saints downed Prague, 36-8. He registered 14 tackles as well.

Gilbert completed all six of his pass attempts for 124 yards and three TDs, made all eight of his PAT attempts and recorded a career-high 60-yard punt in the Outlaws’ 63-20 win against Purcell.

Morton caught six passes for 143 yards and a TD while picking off two passes on defense in the Eagles’ 61-30 win against Kiefer.

Stephens completed 12-of-24 passes for 196 yards and three TDs and added 103 yards rushing on eight carries and four TDs as Claremore Christian defeated Southwest Christian, 58-8, for the HCAA Class 2A championship.

Trimble completed 10-of-18 passes for 228 yards and two TDs and added 73 yards rushing in the Ridgerunners’ 42-35 win against Fort Gibson.

Lagasse caught two passes for 73 yards and a TD and also returned two interceptions for touchdowns in the Wildcats’ 48-14 win against Dibble.

Boatright completed 13-of-16 passes for 160 yardss and five TDs as the Buffaloes defeated Sapulpa, 48-14.

McGowan caught seven passes for 141 yards and had three TDs in the Knights’ 48-22 win against Alva.

Mays rushed for 149 yards on 16 carries and scored four touchdowns as the Wolverines downed Atoka, 61-0.

Deere caught two passes for 50 yards and a touchdown, added a rushing touchdown and returned a punt 78 yards for another TD in the Ironheads’ 42-14 win against Keys.

Dozier rushed for 147 yards and three touchdowns in the Pirates’ 61-0 win against Wewoka.

Bush had both touchdowns for the Highlanders, including a go-ahead 4-yard TD with more than four minutes left as Lawton Mac rallied for a 14-10 win against Piedmont.

Boshoff caught six passes for 75 yards in his team’s 64-28 playoff win against Covington-Douglas. On defense, he made 10 tackles at end, along with two tackles for loss and a sack.

Hurd caught eight passes for 81 yards and two TDs in Pawhuska’s 43-12 win against Hominy. He also intercepted two passes on defense, as well as returning a kickoff 76 yards for a TD.

Montgomery rushed for 238 yards on 12 carries and had four TDs in the Royals’ 54-33 win against Davis. He also recovered a fumble and blocked an extra point kick.

Fincher rushed for 101 yards and two TDs while making 13 tackles on defense in the Blue Devils’ 53-13 win against Hinton.

The quarterback completed 13-of-22 passes for 204 yards and five TDs while adding 79 yards.