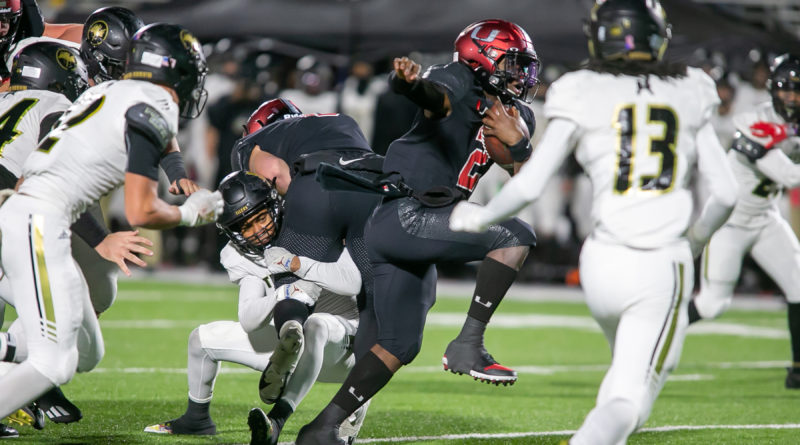 By Buck Ringgold I Photos by Karen Schwartz

OWASSO, Okla. — When Broken Arrow grabbed the momentum in a tightly contested Class 6AI semifinal, Tulsa Union needed one play to swing it right back.

Five plays after the Tigers erased a 10-0 deficit to grab a 14-10 advantage, Union answered. Sophomore receiver Jino Boyd caught a middle slant from senior quarterback Rovaughn Banks and dashed 39 yards for the game-winning touchdown with 6:11 left.

The Redhawks then held on to defeat Broken Arrow, 17-14, in Friday’s 6AI semifinal at Owasso High School.

“I’ve done this for 30 years and been in a lot of heart-stoppers, and I’ll just have to put this one right in there with it,” Union coach Kirk Fridrich said. “It was a grind for the head coach for sure, but our kids did an outstanding job.

“You’ve got to credit Broken Arrow for staying in it, and we expected them to. Tough, tough battle, and we talked to our kids that in the playoffs, there’s going to be players that need to make clutch plays and we saw some really nice ones from our guys.”

The win sends Union (11-1) into the 6AI championship game in Edmond on Dec. 4. Union will play a familiar foe, “Backyard Bowl” rival Jenks, which beat Mustang in the other 6AI semifinal.

It will be a rematch of a game played Sept. 10 at Union, with the Trojans claiming a 22-0 win. Since then, the Redhawks – who had yet to receive that nickname the last time they faced Jenks – have reeled off nine straight wins.

“It feels great just trying to stay composed, one more game, trying to take it all the way,” Boyd said.

Friday’s game was another rematch, when Union defeated BA, 38-28, on Sept. 3. The Tigers (8-4) had avenged an earlier loss to Owasso with a dramatic fourth-quarter rally in their opening-round win last week, and were seeking to do the same against Union.

BA had just taken a 14-10 lead when receiver RJ Spears-Jennings, an Oklahoma commit at defensive back, went high in the air to grab a pass from quarterback Sterling Ramsey for a 39-yard TD with 8:09 left.

In the meantime, the Redhawks knew what they had to do.

“We just tried to keep our heads up and stay together, knowing that we’ve got time and the game’s not over, trying to finish,” Boyd said.

Union took over at its own 33. On the second play of the drive, Banks hooked up with running back Junior Smith for a 22-yard gain to the Tiger 43.

Then, facing a third-and-6 from the 39, Banks threw a quick slant over the middle to Boyd. Boyd made the catch inside the Tiger 25 and outraced the secondary into the end zone.

“Right before the play, we kind of lined up wrong,” Boyd said. “Off my break, I slipped, but I stayed composed and finished the route and scored. It was great.”

T.J. Cowan’s extra point put the Redhawks up by three with 6:11 remaining on the clock.

On the very next play from scrimmage, BA seemed to have regained the lead in dramatic fashion. A pass thrown to a Tiger receiver was tipped by a Union defender, but Spears-Jennings trailed the play and picked up the ball, taking it in for a TD.

However, the Tigers were penalized for having an illegal man downfield, negating the penalty.

Union’s defense eventually forced a fourth down, and BA decided to punt, with the Redhawks taking over with 3:45 left.

But the Redhawks were able to convert a pair of first downs and ran out the clock.

Union’s defense also came up big early in the fourth quarter, hanging on to a 10-7 lead when BA drove inside the Redhawk 5. On a fourth-and-inches, Tiger senior tailback Maurion Horn took the handoff, but was swarmed by a group of Redhawks shy of the marker.

“We played a really good offense, they run the ball really well but we played hard,” Union senior linebacker Gabe Ford said. “In the second half, they came to play, so we just got it done when we needed to on that goal-line stop.”

The Redhawks held BA to 199 yards of total offense, with 145 of those coming via the rush. Union also recorded five sacks.

“Really a great job (by the defense), especially up front, but overall, I thought our guys did an outstanding job. … Again, the guys played extremely tough, played hard and I’m so happy for them,” Fridrich said.

Banks, a senior, completed 9-of-13 passes for 131 yards and added 81 yards rushing on 19 carries. Boyd caught two passes for 83 yards, including a 44-yarder in the third quarter to set up Union’s first touchdown.

The Tigers finally came to life 41 seconds later, when Horn took a handoff and sprinted 74 yards to the house, cutting Union’s lead to 10-7. Horn, a Texas Tech commit, finished with 135 yards on 17 carries and caught two passes for 6 yards.

For the game, Union finished with 294 yards of total offense, 163 of those rushing. The Redhawks ran 59 total offensive plays to 39 for BA.

Late in the opening quarter of a scoreless game, Union got the ball at the BA 49 after forcing a punt. The Redhawks proceeded to put together a 16-play drive to put the opening points on the board.

Union thought it had a touchdown on a Banks keeper, but it was wiped out due to a holding penalty. The drive stalled, and Cowan came on to kick a 32-yard field goal, putting the Redhawks in front, 3-0, with 6:06 left to play in the first half.

The Redhawks’ defense proceeded to force BA to punt on each of its next two drives before halftime.

Union now sets its sights on its longtime rival, Jenks, as the Redhawks pursue their first state title since 2016. It will also be the first time since 2014 the “Backyard Bowl” rivals have squared off in the championship game.