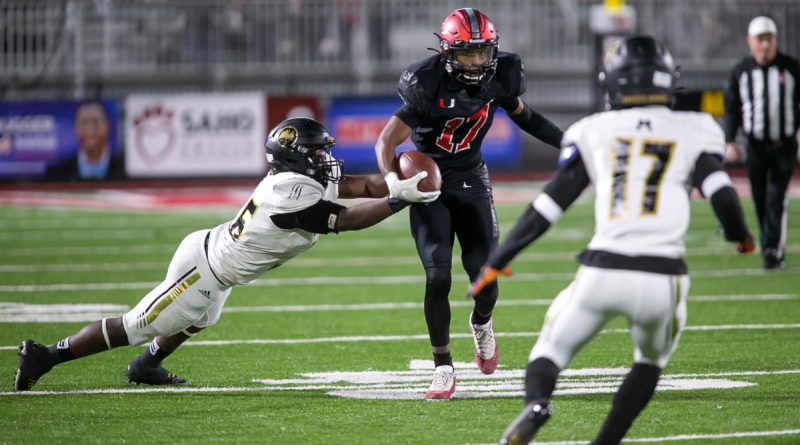 Appropriately enough, the Spartans scored all 48 points in the first half as they tied Wagoner’s state 11-man record with their 48th straight win to reach the 6AII championship game.

The Trojans needed a pair of third-quarter touchdowns to pull away from a pesky Mustang squad to position themselves one win away from repeating as 6AI champions.

A 39-yard TD pass from Rovaughn Banks to Jino Boyd with 6:11 left enabled the Redhawks to rally past the Tigers in a thrilling 6AI semifinal.

Canon West rushed for three touchdowns and added a two-point conversion play as the Tigers moved on to the 4A semifinals.

Junior tailback Erik McCarty rushed for 193 yards and two TDs, including a 54-yard run in the third quarter to help stake the Buffaloes to a 27-14 lead in an eventual 5A quarterfinal win.

Bulldog quarterback Max Brown threw for three TDs and ran one in for another as Lincoln Christian cruised into the 3A semifinals.

The Pioneers were unable to get their revenge from a regular-season loss to Bixby as their season ended in the 6AII semifinals.

Quarterback Andrew Carney rushed for 325 yards and five TDs as the undefeated Cardinals had more than 600 yards on the ground in this 5A quarterfinal win.

The Tigers rallied to take a 14-10 lead in the fourth quarter, but gave up a third-down TD pass with more than six minutes left as their six-game win streak ended in the 6AI semifinals.

Heritage Hall built a 35-13 halftime lead as the Chargers marched their way into the 3A semifinals.

Quarterback Ethan Roush threw for 158 yards and two TDs and added 57 yards rushing and a TD as the Dutch won in the 3A quarterfinals.

The Yellowjackets’ season came to an end last week in the opening round of the 6AII playoffs.

The Hornets’ season ended last week in the first round of the 6AII playoffs.

The Rams lost to Broken Arrow last week in the opening round of the 6AI postseason.

The Eagles were defeated at home by Sand Springs in last week’s first round of the 6AII playoffs.

The Tigers’ season ended in the 5A quarterfinals with a road defeat.

In a much-anticipated playoff rematch, Cole Scott had three TDs as the Warriors built a 40-14 halftime lead to eventually win their 2A second-round playoff.

Berkley Dalton caught an 11-yard TD pass from Brett Pense with less than two minutes left as the Antlers rallied to win their 6AII semifinal matchup.

The Highlanders scored 33 points by halftime as they moved into next week’s 5A semifinals.

Sand Springs nearly pulled off a win in the 6AII semifinals, but a late touchdown pass would end the Sandites’ season.

The Saints took care of business in this 2A second-round matchup, scoring 14 points in each half.

With the win, the Pirates will now play in the 4A semifinals for the third time in the past four seasons.

A valiant effort by the Broncos came up just short as they were edged by the Trojans with a trip to the 6AI title game at stake.

The Cardinals got their second straight road win to start the 3A playoffs, and now advance to next week’s 3A semifinals to face Holland Hall, which lost to Verdigris in the regular season.

Two touchdown runs by Buddy Bizzell proved to be the difference as the Titans rallied from an early 7-0 deficit to win their 5A quarterfinal contest.