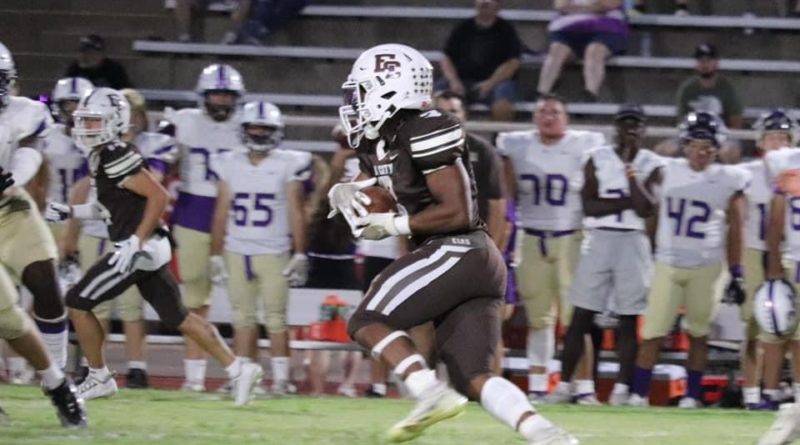 Four years ago, following a nearly 50-year career full of triumphs and even state championships, Dave Meadows retired from coaching.

He relocated from Texas back to Oklahoma — Elk City, to be exact — in order to be closer to family.

But you know what they say about longtime coaches who decide to hang it up — it never gets out of your system. And it took four years for Meadows to start feeling that way.

“I was retired four years and I couldn’t stand it any more,” he said.

It just so happened that there was an opening, right in Meadows’ backyard. Head football coach at Elk City.

Meadows applied for the position and was offered. He immediately jumped at the chance to get back into coaching.

But he wasn’t walking into a stellar situation. The Elks were coming off of back-to-back 0-10 seasons in both 2018 and 2019. They also won a combined 19 ballgames the four seasons prior to that.

Meadows, though, through his years of experience and his coaching acumen, had a plan to get Elk City back on track.

“First of all, I knew some of the kids; I would come to practice and hung around and just knew some of them,” he said. “The thing is, they just weren’t sure what football was. They were trying to do things that other teams do that didn’t fit us, didn’t suit the personnel that we have.

Two seasons after Meadows was lured out of retirement, he has the Elks thinking big. After a 3-5 debut season in 2020 that was greatly affected by COVID-19, Elk City has already tripled that win total in 2021.

The Elks currently stand at 9-2, and with last week’s 21-14 win at previously once-beaten Cushing in the opening round of the 4A playoffs, Elk City won its first postseason game since 2006.

Elk City now heads to 10-1 Grove this Friday for a 4A quarterfinal matchup.

“We just never really got to hit our stride last year,” Meadows said.

“But this year has been great; we haven’t had any interruptions and we’ve improved every time we play. We’ve got quality players at every position on both sides of the ball.”

“We’ve got 17 seniors and most of them play full time,” Meadows said. “I knew (when he took the coaching job at Elk City) that we had a really good class of guys that were going to be in this year’s senior group, talent-wise.”

One of those seniors is tailback Daylan Thompson, who is about 30 yards away from rushing for 2,000 yards on the season, enabling him to set the single-season school record. He has recently committed to play at Southwestern Oklahoma State University in nearby Weatherford.

“He’s strong as can be, he squats over 500 (pounds) and bench presses over 300, so he’s stronger than most guys trying to tackle him,” Meadows said. “He’s got great quickness, his vision has really improved this year. He got injured last year and messed up an ankle and didn’t get to play much after about the fourth game.

“But he’s just a talented guy and he’s got a big heart and he’s got a great group of guys in front of him, and they take pride in him doing well, and that makes for a pretty good recipe for success.”

Another senior vital to the Elks’ success has been Mason Price, who plays receiver and free safety. Price helped seal the big playoff win last week by intercepting a pass in the end zone in the final seconds.

“He’s just all over the field,” Meadows said of Price. “He’s got great hands, is a great blocker; he’s just an ideal player.

“But we’ve got several guys that are really powerful players at their position. Our corners are both fast and athletic and they make it hard for people to make a living throwing the deep ball on us, and our safeties run the alley good and our front guys keep pressure on the quarterback and they’re good tacklers. It’s just been a fun year.”

Meadows began his head-coaching career just about 20 miles east of Interstate 40 at one of the Elks’ biggest rivals, Clinton. He helped contribute to the Red Tornadoes’ championship tradition, leading them to three state championships.

From there, Meadows went to Garden City, Kan., taking over a rebuild similar to what he faced in Elk City, guiding a program that won five games total in the previous five seasons. But in 12 years at Garden City, he led the team to four state title game appearances.

He then went to Texas and spent eight seasons apiece at a pair of football hotbeds, the Dallas suburb of DeSoto and the Houston suburb of Katy, before calling it a career.

Until the Elks beckoned, of course.

“I’ve gotten used to playing with and playing against great players, and I think that’s helped here,” Meadows said. “I think the kids recognize that if I tell them they’re really good, then that’s just not my opinion, that’s based on lots of years of seeing great players.”

And he has helped awaken the football spirit around town.

Elk City won a state title in 1998 and played in three other title games. But in terms of tradition, the Elks have generally been overshadowed by their 4A rivals along I-40 in Clinton and Weatherford.

“(Elk City residents) have really fallen in love with the guys on the team, and their efforts and what we’ve done,” Meadows said. “It’s just been a great atmosphere, all around town and around the high school, too.”

When asked if Meadows honestly thought the Elks would now be in this position, needing two more wins to play for a 4A state title, it didn’t take him long to come up with the answer.

“I knew some of the kids, and I knew the abilities they had and I knew if we maximized our strength and our time in the weight room and learned to believe in ourselves, then the answer to that is yes,” he said.

On Friday, the Elks want to take advantage of another opportunity, and reach their first state semifinal since 2004. And with someone who didn’t want to stay retired helping show them the way.