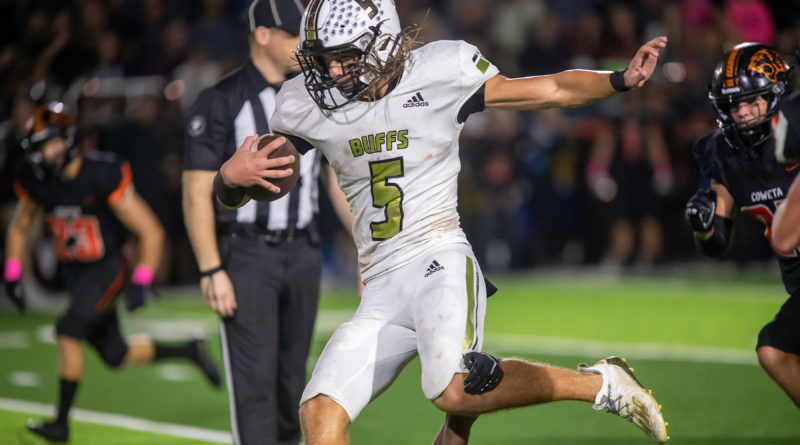 Over the next few weeks, we’ll be taking a position-by-position look at some of the top players in Oklahoma high school football. This list focuses on the running backs.

There are hundreds of standout football players in Oklahoma and these lists are not intended to be comprehensive. Use the comments section to discuss the other running backs worthy of fans’ attention in 2021.

Brown, an Oklahoma State commit, is determined to help the Demons claim the 2A state title before his high school career ends. In the regular season, Brown rushed for 1,427 yards and 18 touchdowns.

Perhaps the most electrifying player in the state whenever he gets his hands on the ball, Presley can play both running back and receiver for the Spartans, who are bidding for their fourth straight 6AII state title. In fact, the Oklahoma State commit leads the Spartans in both rushing (755 yards and 12 TDs) and receiving (47 catches for 604 yards and six TDs). His best rushing performance came in a game against Stillwater in which Presley rushed for 233 yards and three TDs, and then added a 113-yard two-TD outing the following week as Bixby beat Bartlesville.

A converted receiver, Horn has flourished at running backs and has helped the Tigers’ recent surge, with the team winning their final five regular-season ballgames. On the season, Horn has 1,008 yards and eight touchdowns.

The dynamic McCarty has been a force behind the Buffaloes’ 10-0 regular season, their first perfect regular season in 10 years. He has rushed for 1,198 yards and 26 touchdowns, and has even lined up at quarterback in the “Wildcat” formation, throwing a touchdown pass in the Buffs’ win at Coweta.

Last season, Crawford had more than 1,100 yards and 10 TDs. He’s more than exceeded that this season as perhaps the top breakout rusher in 2021. Going into the 4A playoffs, Crawford had approximately 2,100 yards and 37 touchdowns. In the regular season finale, Crawford rushed for 254 yards and five touchdowns as the Ridgerunners claimed the No. 1 playoff seed from 4A-3.

Using a physical running style, Carroll has helped put the Trojans into a position to repeat as Class 6AI state champs. He cleared the 1,000-yard mark in the Trojans’ regular-season finale, a win against Westmoore in which he also scored two touchdowns.

Smith was a reason that Union was able to roll to the 6AI-2 district title, as the team won all seven of its district games. In a win against Mustang, Smith rushed for 134 yards and a touchdown and also caught a receiving touchdown, accounting for more than 200 all-purpose yards.

Bizzell has helped the Titans stay competitive in Class 5A with his running. But in perhaps the team’s biggest win of the season, he had an impact in passing situations. Bizzell had two fourth-quarter touchdowns in the Titans’ come-from-behind 22-19 win at Guthrie, scoring on a hook-and-lateral before catching a game-winning TD pass with four seconds remaining.

Orange, who rushed for more than 1,600 yards and 22 TDs as a junior, went over 1,000 yards again this season, going for 150 yards and two TDs in the Wolves’ regular-season finale. In a game against Durant earlier this season, Orange rushed for 191 yards and had six total touchdowns.

Mattox has helped put the Pirates in position to win their second 4A championship in three seasons. He entered the playoffs having rushed for 1,678 yards with 21 touchdowns. In the Pirates’ regular-season finale, Mattox had 312 yards and four TDs as Poteau downed Broken Bow, 59-16, to claim the 4A-4 district title.

Lund finished the regular season with more than 1,350 yards and also had 16 total touchdowns. Lund had 297 yards on 38 carries and five touchdowns in the Owls’ regular-season finale, a win against Chickasha.

Thompson became the Elks’ all-time single-season leading rusher in his team’s regular-season finale, when he rushed for 188 yards and a TD in a win against Newcastle, as Elk City qualified for the 4A playoffs. The Southwestern Oklahoma State commit ended the regular season with 1,880 yards.

Mays has had a big season for a Wolverine team that has a chance to go far in the 2A playoffs. He has rushed for 1,364 yards and 24 touchdowns entering postseason play. In a late-season win at Spiro, Mays had 417 yards on 30 carries and scored seven touchdowns.

Moore rushed for 1,771 yards and had eight touchdowns in the regular season for the Panthers. In a game in October against Tecumseh, Moore had 327 yards rushing on 28 carries as the Panthers prevailed.

Virgil turned in a very solid campaign for the Hornets, rushing for 1,369 yards and scoring 24 touchdowns in the regular season to help Hilldale reach the 4A playoffs. In the Hornets’ regular-season finale against archrival Fort Gibson, Virgil rushed for 282 yards on 22 carries and scored four total TDs in a 49-46 win.

Fisher has helped the Wildcats surge into the 3A playoffs after they lost their first six games. He had 331 yards and five TDs in a win against Westville and then rushed for 304 yards on just 13 carries and five more TDs as Checotah downed Locust Grove in the regular-season finale. Fisher has also received offers from several Division I schools.

Metscher had more than 1,400 yards on the ground and 17 touchdowns in the regular season. He’s also one of the top linebackers in the state, and is a reason Bethel won its first-ever playoff game last season and returned to the 2A playoffs this season.

Clover was a primary reason the Ironheads finished the regular season 9-1 and District 2A-6 champions. He rushed for 1,024 yards and scored 15 touchdowns.

Dozier crossed the 1,000-yard barrier in his team’s regular season finale, finishing with 1,042 yards in helping the Pirates achieve a 10-0 record going into the Class A playoffs. He also found the end zone 19 times.

Campbell wants to help the Patriots return to Edmond to win a third straight 2A championship. In an early-season win against Tulsa NOAH, he rushed for 159 yards and two TDs. Then in six district ballgames, Campbell accounted for 528 all-purpose yards.

Also a stellar linebacker, Woodham has been a stalwart for a Dutch squad seeking to repeat as Class 3A state champions. In the regular season, he rushed for 1,262 yards and scored 17 touchdowns.

Gray emerged as one of the state’s premier tailbacks this season. In the Highlanders’ 10 regular season games, Gray set a single-season school rushing record with 1,891 yards on 187 carries. He also scored 32 touchdowns as Lawton Mac went 9-1 and finished with a share of the 5A-1 district title.

Jim helped the Eagles finish 9-1 in the regular season and reach the Class A playoffs with 1,161 yards rushing and 22 touchdowns. For his career at Warner, Jim has rushed for more than 4,700 yards.

Hill has become a force down the stretch for the Lions. In fact, in their regular-season finale, Hill had 185 yards and five TDs as Chandler defeated Prague. Entering the playoffs, he has rushed for 1,143 yards and 16 TDs.

West is a key reason for the Tigers’ 10-0 regular season and a prime contender in Class 4A. He really came through in the Tigers’ Week 10 game, as West went for 194 yards and two touchdowns as Tuttle rallied to beat Blanchard, 14-13. West also rushed for 118 yards and scored all three touchdowns in the Tigers’ 22-7 win at previously undefeated Cushing.

Robinson has made an immediate impact for a Wolves team seeking to return to the 6AI title game. He has rushed for nearly 1,500 yards and scored 16 touchdowns. In a game against Westmoore, Robinson had 200 yards and five TDs. He also had 191 yards in the Wolves’ regular-season finale, a win at Norman.

McMurtrey has rushed for more than 830 yards and nine TDs, including going for more than 110 yards and scoring four total touchdowns as the Tigers defeated Glenpool in an important district game in October.

Jones began his senior season with a 181-yard four-touchdown performance as the Sandites defeated rival Sapulpa. In the next game, Jones went for 224 yards and three TDs in a win against Bishop Kelley. He finished with 862 yards and 11 TDs as the Sandites now advance into the 6AII playoffs.

Helping pick up the slack after starting quarterback Andrew Carney was out for several games due to an injury, Gilkey was a force carrying the ball for the Cardinals, who went 10-0 in the regular season. Going into the 5A playoffs, Gilkey has rushed for 1,168 yards and 23 TDs. He has scored four TDs three different times this season.

Mason, who had nearly 500 yards as a sophomore, rushed for 725 yards and 10 TDs as the Tigers finished the regular season 9-1 and is one of the teams vying to play for the 5A title. In one three-game stretch this season, Mason rushed for a combined 343 yards and four TDs, all Coweta wins.

Faulkner is one of the main cogs in a very potent Charger offense, as Heritage Hall entered the 3A playoffs with a perfect 10-0 record. Faulkner had more than 800 yards and 17 touchdowns in the Chargers’ first seven ballgames, and had a 233-yard five-TD performance in a win against Perkins-Tryon.

Ray has put together a strong season for the Yellowjackets, who are determined to win the 6AII title after falling in last season’s state championship game. Through the regular season, Ray has rushed for 1,243 yards on 118 carries with 11 TDs and has also caught seven TD passes. Ray had 287 yards on 35 carries and a key late touchdown as Choctaw defeated Booker T. Washington.