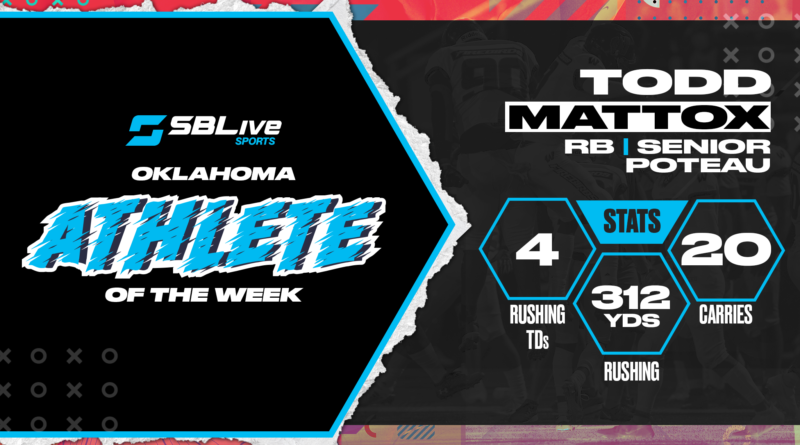 Congratulations to Poteau tailback Todd Mattox for being voted SBLive’s Oklahoma High School Athlete of the Week for Nov. 1-7!

The senior tailback rushed for 312 yards on 20 carries and scored four touchdowns as the Pirates clinched the 4A-4 district title with a 59-16 win at home against Broken Bow.

Lund had 297 yards on 38 carries and five touchdown runs, three coming in the first quarter. He also had a 79-yard TD to help clinch the Owls’ 49-27 win against Chickasha.

Crawford rushed for 254 yards and five touchdowns as the Ridgerunners clinched the No. 1 playoff seed out of 4A-3 with a 42-20 win against Miami.

Thompson rushed for 188 yards and a TD as he became Elk City’s all-time single-season leading rusher in his team’s 28-14 win against Newcastle.

Robertson had three touchdown runs as the Bulldogs defeated Skiatook, 34-14.

Barnes had two first-quarter TD runs as the Saints finished off a perfect regular season with a 55-0 win against Blackwell.

Belcher had a pair of TD runs each covering 55 yards, and he also had a two-point run and threw two two-point passes to help his team prevail, 54-6, against Thackerville.

Ross completed all 12 of his passes for 243 yards and had two TDs to spark the Dragons past Quinton, 56-6.

The junior linebacker had 18 tackles, four sacks and three hurries in the Cardinals’ 43-12 win against Vinita. He also had two rushing touchdowns.

Horn continued his hot running streak of late, going for 225 of the Tigers’ 381 rushing yards with a TD in his team’s 55-7 win against Enid.

Robles had two touchdown runs in Piedmont’s 24-16 win against Woodward.

Cantrell completed 8-of-11 passes for 214 yards and four TDs as the Warriors wrapped up a perfect regular season with a 54-0 win against Christian Heritage.

The talented junior tailback had 92 yards on nine carries and three TDs as the Buffaloes capped off a 10-0 regular season with a 54-12 win against Tulsa Rogers.

Francis threw for 255 yards and four touchdowns as the Patriots downed Haskell, 42-12.

The Longhorns’ quarterback completed 15-of-22 passes for 332 yards and six TDs in his team’s 55-30 win against Meeker.

Kelley recovered a blocked punt in the end zone and blocked another punt which resulted in another touchdown in Union’s 42-7 win against Edmond North.

Williams completed 9-of-13 passes for 295 yards and two TDs as the Chieftains qualified for the playoffs with a 47-22 win against Glenpool.

Ramos was a perfect 6-of-6 passing for 180 yards and four TDs as the Wolverines posted a 54-0 win against Heavener.

The Hornets’ tailback rushed for 282 yards on 22 carries while catching three passes for 52 yards along with scoring four total TDs in Hilldale’s 49-46 win against rival Fort Gibson.

Pennington completed 18-of-22 passes for 293 yards and two TDs while adding a rushing TD in the Sandites’ 44-7 win against Putnam City West.

Bertelli caught three passes for 71 yards and two touchdowns and returned an interception 30 yards for another TD in his team’s 69-20 win at Tulsa Booker T. Washington, extending the Spartans’ current win streak to 46 straight games.

Dozier had three touchdown runs as the Pirates wrapped up a 10-0 regular season with a 49-0 win against Talihina.

The Lions’ tailback rushed for 185 yards on 22 carries and had five TDs in Chandler’s 47-14 win against Prague.

Lyons rushed for 120 yards on 22 carries with three TDs, added two receptions for 29 yards and had a sack and forced fumble on defense as the Indians clinched a postseason berth with a 55-28 win against Spiro.

The Cardinals’ quarterback completed all eight of his passing attempts for 192 yards and accounted for five total TDs as Collinsville wrapped up a 10-0 regular season with a 55-13 win at Tahlequah.

West rushed for 194 yards and two touchdowns on 34 carries as the Tigers rallied from a halftime deficit to improve to 10-0 after a 14-13 win against Blanchard.

The Lions’ quarterback was 15-of-30 passing for 110 yards and three TDs while adding 170 yards rushing on 22 carries and a TD as Moore wrapped up its season on a high note with a 44-41 win at Mustang.

Rogers had 111 yards of total offense, three rushing touchdowns and a TD reception to help the Bulldogs move to 10-0 with a 55-14 win against Stigler.

Crooks caught nine passes for 232 yards and three touchdowns and also recorded 10 tackles in the secondary in the Tigers’ 35-16 win against Harrah.

The talented freshman tailback rushed for 191 yards on 26 carries in the Wolves’ 41-6 win at Norman.

Bristow rushed for 282 yards on 39 carries and scored three touchdowns in Ponca City’s 35-28 win at Muskogee, the Roughers’ final game at Indian Bowl after 82 seasons.

The receiver hauled in seven passes for 132 yards and three touchdowns in his team’s 62-0 win against Ketchum.

Byrams rushed for 73 yards on 11 carries and had two touchdowns, including a game-winning 28-yard dash with less than four minutes left as the Conquerors rallied from a double-digit fourth-quarter deficit to beat Beggs, 27-26, to win the 2A-7 district title Saturday night.

Whorton rushed for 68 yards on 10 carries and had two TDs as tahe Comets downed Shawnee, 55-14.