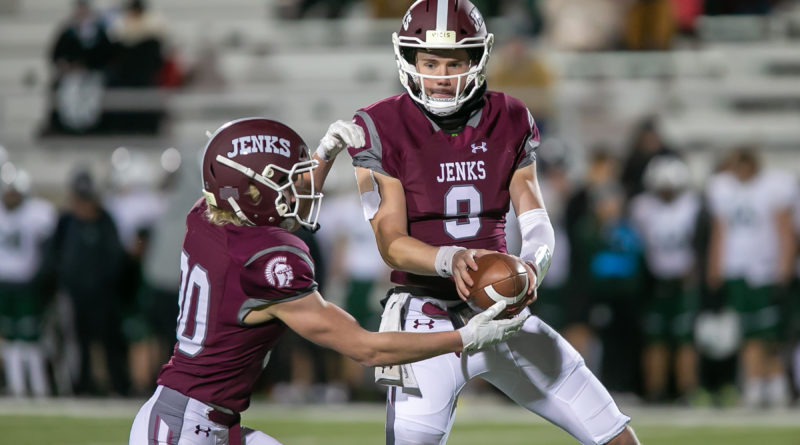 JENKS — It was an inauspicious beginning in the first playoff game for Jenks since winning it all a season ago.

The Trojans were forced to punt on the first series of Friday’s 6AI opening-round playoff against Norman North. Then, the Timberwolves eventually scored on their opening series to take the lead before stopping the Trojans on a fourth-and-short.

But once the Trojans were finally able to reach the end zone, they were able to pile on the points. Jenks scored 38 straight points the remainder of the opening half as the Trojans cruised to a 41-14 win against Norman North at Allan Trimble Stadium.

“Norman North, they’ve gotten off to a great start in many of their games, so I wasn’t surprised they did this game,” Jenks coach Keith Riggs said. “Our defense really stepped up and our offense got things going, and I’m just really proud of our kids.

“We didn’t really let it faze us when we got down. We’ve got a very mature, veteran group and they’ve been there before and showed great composure and just stayed after it and it feels good to get the win.”

Jenks (10-1), which has now won nine straight games after falling to Bixby, will advance to next week’s 6AI semifinals to face Mustang, a winner against Edmond Santa Fe in another first-round game Friday. The semifinal date and site has yet to be determined.

After being stopped on its first two possessions, Jenks scored touchdowns on its next four, and six of its next seven to go into halftime leading 38-7.

Tailbacks Jaiden Carroll and Jalyn Stanford each had two touchdowns in the first half, while freshman quarterback Shaker Reisig threw a TD strike to receiver Glenver Jones.

In his first playoff start, Reisig completed 6-of-12 passes for 133 yards and two TDs.

“Probably like every game, there was some good and some bad. … There were some reads that he missed, but also some really good throws that he made, so we’ll evaluate the film and try to get better from it and get ready for Mustang,” Riggs said.

Jenks’ defense, following North’s opening-drive TD, forced five punts and got two takeaways the rest of the first half. The Trojans scored touchdowns off both of those turnovers while holding North to 122 yards through the opening two quarters.

“I thought we played really well,” said Jenks senior safety Joey Havir, who had one of those first-half takeaways, recovering a fumble. “Our (defensive) line did really well, creating pressure, making the quarterback stay out of the pocket.

“But it starts with stopping the run; stop the run and that shuts an offense down. We stopped the run and you can see what happened.”

The Timberwolves (7-4), the No. 4 seed from 6AI-2, played inspired at the start. They scored on their opening drive, a 5-yard keeper from senior quarterback Gavin Frakes, to take a 7-0 lead.

North’s defense then stood up Jenks tailback Jaiden Carroll on a fourth-and-short, with Eli Moulton leading the charge.

But things took a turn for the worse for the Timberwolves several plays later when Frakes left the game with an injury after throwing a pass and did not return. The Trojans promptly forced a punt, and began to take things over.

They moved the ball 78 yards in just four plays to tie the score. Carroll, who started the drive with a 39-yard run, finished it off with a 5-yard touchdown, and Max Paskvan added the PAT for a 7-all score with 2:46 left in the first quarter.

After forcing a North punt, Jenks needed just two plays to go in front to stay. From the Trojan 37, Carroll took a short pass from Reisig and weaved his way through several defenders before reaching the end zone for the second time.

Paskvan’s PAT made it 14-7 with 19 seconds left in the opening quarter.

As the second quarter started, Jenks forced another punt. But North shanked the kick, and it went only 1 yard to the Timberwolves’ 19.

Two plays later, Stanford found the end zone for the first time, going in from 7 yards out as Jenks built a 21-7 advantage.

The Trojans put together another two-play drive after Jackson Standlee recovered a North fumble. Reisig found a wide-open Jones in the end zone from 21 yards out, as the lead grew to 28-7 with 10:01 left in the first half.

Another Jenks fumble recovery set up its next TD. Four plays after Havir came up with a loose ball, Stanford darted in from 2 yards out.

“Any time we can take the ball away and score off of defense, we can win the ballgame,” said Havir, who was a starter on last season’s title squad.

“The Bixby game was a turning point. I think we were playing great all throughout the season, but in the playoffs, you’ve got to be playing your best ball, so I think we are definitely doing that.”

The Trojans made it 38-7 with 49 seconds left until halftime on their next drive, which ended when Paskvan split the uprights on a 44-yard field goal try.

Paskvan added another field goal, this coming from 26 yards out, to complete the Trojans’ opening second-half drive. That made it 41-7 with 2:13 left in the third quarter.

“(I liked) their focus this week,” Riggs said. “It’s so easy to look past an opponent and our kids did a great job, had a great week of preparation and it showed (Friday).”

The Trojans finished with 391 yards of total offense, 310 coming in the opening half. They totaled 221 yards rushing and 170 more through the air.

Carroll finished with 96 yards rushing on 10 carries, all in the first half, while Stanford added 51 yards on nine carries. Stanford was shaken up near the end of the first half, but Riggs said Stanford should be good to go for next week’s semifinal.

The Timberwolves ended up with 325 yards of total offense, with 208 of those coming via the rushing game.

North junior tailback Chapman McKown led all rushers with 150 yards on 21 carries. Sixkiller was 13-of-25 passing for 98 yards, and Dorney caught nine passes for 76 yards.