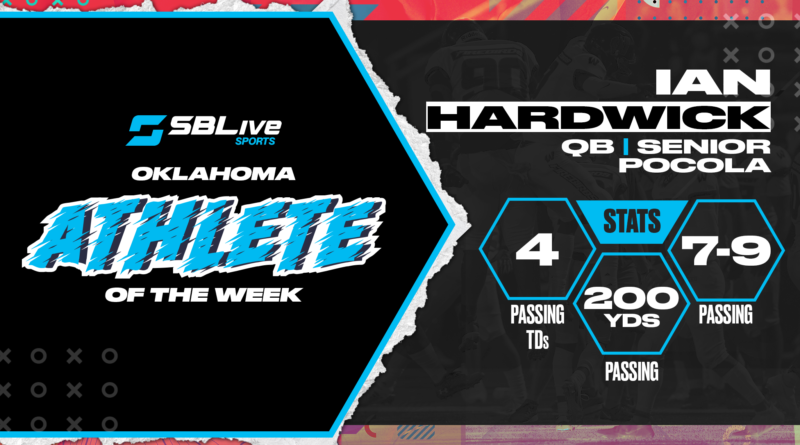 Congratulations to Pocola quarterback Ian Hardwick for being voted SBLive’s Oklahoma High School Athlete of the Week for Oct. 25-31!

The senior threw for four touchdown passes, including one to his younger brother Austin Hardwick, in the Indians’ 53-0 win against Heavener. Hardwick was 7-of-9 passing for 200 yards and added 75 yards rushing on 10 carries.

Hardwick ran away with this week’s honor, receiving 70.77% of the total vote.

Smith accounted for his team’s first two touchdowns on pass receptions and later ran a reverse 28 yards for another TD in the Lions’ 46-20 win against Harrah.

Gilbert passed for two touchdowns, ran for three touchdowns and kicked six extra points in the Outlaws’ 48-6 win against Frederick.

McCarty rushed for 111 yards on 16 carries and four TDs, caught three passes for 81 yards and a TD and even blocked a punt on special teams as the Buffaloes moved to 9-0 with a 54-20 win at Shawnee.

Campbell had a pair of rushing touchdowns to help pace the Patriots past Kiefer, 38-12.

Matteson had a touchdown run and intercepted a pass for another TD in the Saints’ 42-14 win against Henley.

Collins rushed for 211 yards on 14 carries and had three TDs in the Bulldogs’ 36-26 win against Stilwell.

Boone was 29-of-34 passing for 331 yards and seven TDs and added a rushing TD, finishing with 409 yards of total offense in the Hornets’ 54-21 win against Muskogee.

Wasel completed 12-of-17 passes for 294 yards and seven touchdowns in the Yellowjackets’ 60-27 win against Putnam City West.

Jones caught five passes for 202 yards and three TDs in the Longhorns’ 49-42 win against Prague.

Carroll rushed for 81 yards and three TDs and returned an interception for a TD, accounting for the Trojans’ first four TDs in their 44-0 win against Edmond Memorial.

Smith rushed for 83 yards on 13 carries and had three TDs in Union’s 42-0 win against Southmoore.

Carney rushed for 157 yards and three TDs and also threw for 105 yards and a TD as the Cardinals remained undefeated after a 63-8 win against Pryor.

Parnell returned an interception 21 yards for a TD and helped the Cardinal defense force seven punts as Verdigris broke Holland Hall’s 20-game winning streak with a 12-7 win. He also had 10 tackles, four for loss and a sack.

Cabbiness caught six passes for 146 yards and two TDs as the Timberwolves won at Edmond North, 35-24.

Harper caught 12 passes for 158 yards and two TDs, as well as catching the game-winning two-point conversion in the Bears’ 36-35 overtime win at previously undefeated Ardmore.

Mattox rushed for 185 yards and crossed the end zone three times in the Pirates’ 49-21 win at Fort Gibson.

Shelby rushed for 244 yards and five touchdowns in the Warriors’ 48-0 win against Porum.

Adcock completed all six of his pass attempts for 201 yards and four TDs in the Ironheads’ 49-0 win against Valliant.

Mullen completed 7-of-12 passes for 194 yards and three TDs in the Wildcats’ 54-28 win against Sequoyah-Tahlequah.

Thompson had two TD passes and added three TD runs in the Eagles’ 53-0 win against Hulbert.

Snyder caught seven passes for 173 yards and three TDs, rushed for 52 yards and also intercepted two passes and registered nine tackles on defense in his team’s 49-16 win against Meeker.

The talented senior tailback had three touchdown runs in the Highlanders’ 73-6 win at Oklahoma City Capitol Hill. He also set the new single-season school record for points as Gray now has 164 on the season.

Jones caught a touchdown pass and returned a kickoff 99 yards for another TD in the Chieftains’ 21-14 win against Claremore.

Mays rushed for 417 yards on 30 carries and scored seven touchdowns as the Wolverines outlasted Spiro, 56-42.

Parker completed 26-of-40 passes for 439 yards and five TDs in the Bulldogs’ 34-8 win against Mooreland.

Berlowitz completed 16-of-24 passes for two touchdowns and had two touchdown runs in the Tigers’ 63-14 win against Ada.

Trimble rushed for 164 yards on 18 carries and scored five touchdowns in his team’s 56-13 win against Cleveland.

Burke threw for 239 yards and four TDs while completing 13-of-17 passes in the Spartans’ 66-13 win against Ponca City, extending Bixby’s current winning streak to 45 straight games.

Hinkle won the 6A girls division at the state meet Saturday at Edmond Santa Fe, finishing with a time of 17:56.77.

Antonelli won the 6A boys division at the state meet Saturday at Edmond Santa Fe, finishing in a time of 15:14.80.

Meyers was the 5A girls champion at Saturday’s state meet at Edmond Santa Fe, winning the event in a time of 19:00.80.

McLaughlin was the 4A boys champion at Saturday’s state meet, as he won the event in a time of 15:42.01.

Washko was the winner in the 3A girls division at Saturday’s state meet, finishing with a time of 11:54.85.

Baggs won the 2A girls division at Saturday’s state meet, as she finished with a time of 12:06.95.

Franco claimed first place in the 2A boys division at Saturday’s state meet, winning the event in a time of 16:20.51.