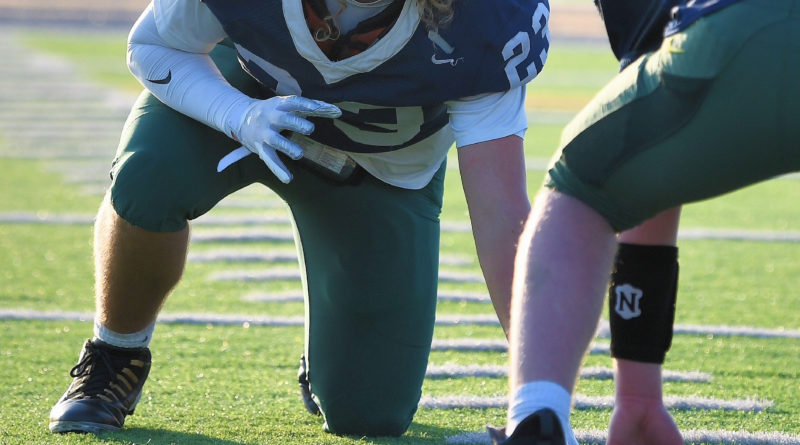 Over the next few weeks, we’ll be taking a position-by-position look at some of the top players in Oklahoma high school football. This list focuses on the defensive linemen.

There are hundreds of standout football players in Oklahoma and these lists are not intended to be comprehensive. Use the comments section to discuss the other defensive linemen worthy of fans’ attention in 2021.

One of the premier defensive ends in the state, McClellan played his first three seasons at Tulsa Edison before transferring to Owasso in the offseason. Through the Rams’ first seven games, McClellan had 24 tackles, four sacks and eight hurries despite being constantly double-teamed and even triple-teamed at times.

A season ago, Brown recorded 19 sacks to help the Yellowjackets reach the 6AII state championship game. The senior end is continuing to post up impressive totals in 2021. In his first seven games, Brown registered 63 tackles, 21 for loss, along with eight sacks. He forced two fumbles and recovered another as well. Then in the Yellowjackets’ eighth game, Brown had four sacks, resulting in 37 yards of lost yardage, in Choctaw’s road win at Sand Springs.

Hampton has been a key reason behind the resurgence of the Eagles, who went from 4-6 a year ago to District 6AII-1 champs this season. He has recorded 14.5 sacks, five of those coming in a game against Putnam City North. Hampton also had 15 tackles in a win against Midwest City Carl Albert as well as 10 tackles in a win at Stillwater, perhaps the Eagles’ most important win this season as it broke the Pioneers’ 21-game district winning streak.

Kariuki could be one of the state’s top senior linemen in the 2022 season. He can also make an impression in this season’s playoffs, as Kariuki attempts to help the Wolves return to the 6AI state championship game. This season, he has 32 tackles, seven for losss, four sacks and four hurries.

Also a returning starter at tackle on the offensive line, Cummings has been a vital part of the Tigers’ defense as Tuttle roared out to a 9-0 start and is a favorite to win the Class 4A title. Through the Tigers’ first seven games, Cummings registered 42 tackles, seven for loss, three sacks and one forced fumble.

Jordan, who had 42 tackles and nine sacks his sophomore season, has remained a force up front for a Demon team expected to contend for the Class 2A title. He has 13 sacks on the season so far. In a pivotal 24-22 win at defending 2A champion Metro Christian, Jordan returned an interception for a touchdown and also had a sack on a desperation drive by Metro which helped seal the win.

A defensive end, Johnson was one of five returning starters on defense for the Panthers. As a junior, he finished with 80 tackles, 10 for loss and six sacks. This season, Johnson has 44 tackles, eight for loss, along with nine sacks, two forced fumbles and a fumble recovery. He has committed to play at Oklahoma State.

Boshoff is a starter on both the offensive and defensive lines for the Rams. As an end this season, Boshoff has recorded 13 sacks along with 88 tackles and 25 for loss. He has recovered a fumble as well.

Cooper has 13 sacks along with six hurries. He had five of those sacks in a game against Konawa. In addition, Cooper has registered 56 tackles.

As a junior, Albin was the Class 4A leader in tackles for loss with 31 to go along with six sacks and 86 tackles. This season, the defensive end has 13 sacks, 19 hurries, 40 tackles and 27 of those for loss. Albin has picked off two passes as well for the playoff-bound Hornets.

A defensive end, Ramsey had 56 tackles and five sacks a season ago. For 2021, he has exceeded those totals, recording 67 tackles and 13 sacks, seven coming in a game against Christian Heritage. Ramsey also has 17 tackles for loss and nine hurries.

This returning end is one of the premier players in Class C. Last season, Harrison finished with 120 tackles, five forced fumbles, two fumble recoveries and even blocked four punts. In 2021, Harrison has 83 tackles, including 20 in a game against Oaks, to go with 11.5 sacks and five hurries. He has caused one fumble and recovered two more as well.

Lucas had 121 tackles and 15 sacks last season for the Trojans. The end already has registered 18 sacks this season, and has had at least three sacks in four of his team’s games. Lucas also has 79 tackles, 18 for loss and four hurries.

Anderman plays running back on offense and is a nose guard on defense. He has nine sacks this season along with 46 tackles and 16 tackles for loss for the Wildcats, who won eight of their first nine ballgames.

Schwier was the Eagles’ sack leader last season with nine and has topped that in 2021 as he now has 12 sacks. The defensive tackle, who also plays center on offense, also has 75 tackles and 44 for loss. He had a season-high 18 tackles in a game against Keota.

Brown is a mainstay on the Trojans’ defense, as he is a three-year starter, one of eight returning starters back for the defending Class 6AI state champs. The tackle is part of a strong defensive front for Jenks, which has won the 6AI-1 district title and is going for a repeat state crown.

Thomas, a defensive tackle, was one of 10 returning starters for a Union team that has a strong chance of reaching the 6AI title game. He will also be one of the more heavily sought after linemen next season as Thomas has already received several Division I offers.

Winter has played a variety of positions for the Pirates, including tight end, wide receiver and offensive line. But his best spot may be on the defensive front and has helped Bristow contend for a 4A-3 title. Winter was also part of the defense that shut out defending 4A champion Wagoner in a win earlier this season.

Rowaiye, a defensive tackle, has received interest from a number of Division I schools. He started off strong in the Spartans’ first couple of games, as he recorded 4.5 sacks and nine tackles for loss.

Okoye is one of the young linemen to watch in the near future. A defensive end who also plays tight end and on the offensive line, he has already received interest from such schools as Oklahoma and Kansas State. In a game against Dasche (Texas), Okoye had eight solo tackles, five tackles for loss, three sacks, four hurries and two pass deflections.

One of the underrated linemen in Class 6A, this defensive end has a 6-foot-8 wingspan and runs a 4.72 in the 40. He has received attention from several area colleges.

Last season, Edwards finished with 12 sacks along with 46 tackles and seven tackles for loss. Though the Bombers fell short of postseason play this season, Edwards has turned in another solid campaign and has received offers from various schools.