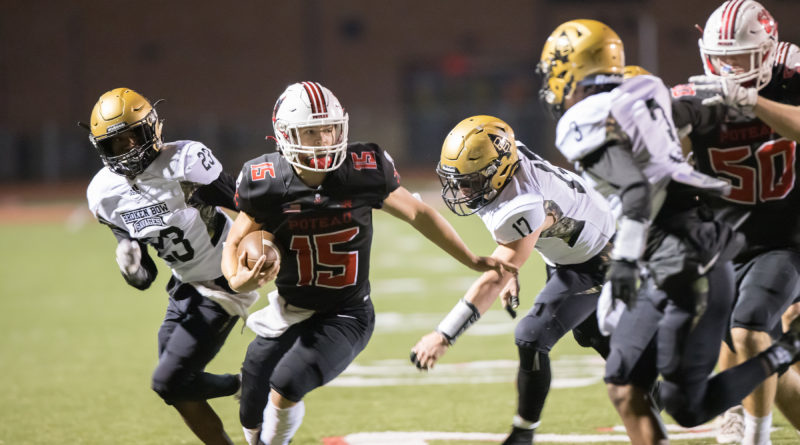 The following is a list of several of the top Oklahoma high school football performers from Week 10.

The senior tailback rushed for 312 yards on 20 carries and scored four touchdowns as the Pirates clinched the 4A-4 district title with a 59-16 win at home against Broken Bow.

Lund had five touchdown runs, three coming in the first quarter. He also had a 79-yard TD to help clinch the Owls’ 49-27 win against Chickasha.

Crawford rushed for 254 yards and five touchdowns as the Ridgerunners clinched the No. 1 playoff seed out of 4A-3 with a 42-20 win against Miami.

Thompson rushed for 188 yards and a TD as he became Elk City’s all-time single-season leading rusher in his team’s 28-14 win against Newcastle.

Robertson had three touchdown runs as the Bulldogs defeated Skiatook, 34-14.

Barnes had two first-quarter TD runs as the Saints finished off a perfect regular season with a 55-0 win against Blackwell.

Belcher had a pair of TD runs each covering 55 yards, and he also had a two-point run and threw two two-point passes to help his team prevail, 54-6, against Thackerville.

Ross completed all 12 of his passes for 243 yards and had two TDs to spark the Dragons past Quinton, 56-6.

Whorton rushed for 68 yards on 10 carries and had two TDs as tahe Comets downed Shawnee, 55-14.

Horn continued his hot running streak of late, going for 225 of the Tigers’ 381 rushing yards with a TD in his team’s 55-7 win against Enid.

Robles had two touchdown runs in Piedmont’s 24-16 win against Woodward.

The talented junior tailback had 92 yards on nine carries and three TDs as the Buffaloes capped off a 10-0 regular season with a 54-12 win against Tulsa Rogers.

Francis threw for 255 yards and four touchdowns as the Patriots downed Haskell, 42-12.

Kelley recovered a blocked punt in the end zone and blocked another punt which resulted in another touchdown in Union’s 42-7 win against Edmond North.

Williams completed 9-of-13 passes for 295 yards and two TDs as the Chieftains qualified for the playoffs with a 47-22 win against Glenpool.

Pennington completed 18-of-22 passes for 293 yards and two TDs while adding a rushing TD in the Sandites’ 44-7 win against Putnam City West.

Bertelli caught two touchdown passes and returned an interception for another TD in his team’s 69-20 win at Tulsa Booker T. Washington, extending the Spartans’ current win streak to 46 straight games.

Dozier had three touchdown runs as the Pirates wrapped up a 10-0 regular season with a 49-0 win against Talihina.

Lyons rushed for 120 yards on 22 carries with three TDs, added two receptions for 29 yards and had a sack and forced fumble on defense as the Indians clinched a postseason berth with a 55-28 win against Spiro.

West rushed for 194 yards and two touchdowns on 34 carries as the Tigers rallied from a halftime deficit to improve to 10-0 after a 14-13 win against Blanchard.

Rogers had 111 yards of total offense, three rushing touchdowns and a TD reception to help the Bulldogs move to 10-0 with a 55-14 win against Stigler.

The talented freshman rushed for 191 yards on 26 carries in the Wolves’ 41-6 win at Norman.

Bristow rushed for 282 yards on 39 carries and scored three touchdowns in Ponca City’s 35-28 win at Muskogee, the Roughers’ final game at Indian Bowl after 82 seasons.