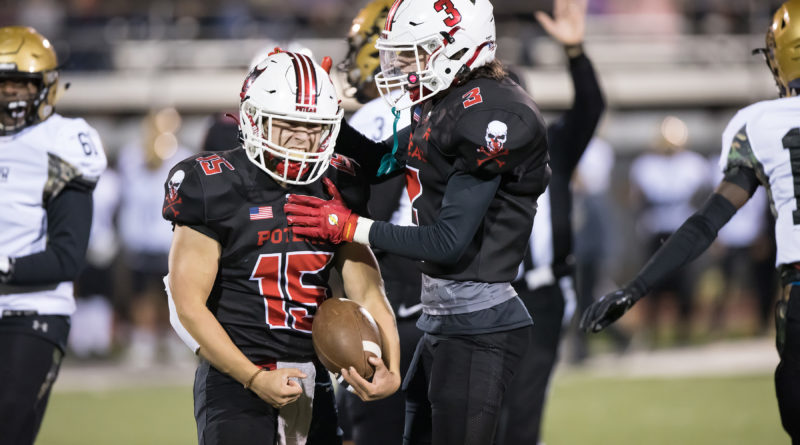 POTEAU, Okla. — There really aren’t a lot of surprises in regards to how Poteau operates its offense.

The Pirates will run the football, and run it consistently, while daring the opposition to try to stop it.

Poteau rushed for a whopping 594 yards, while senior tailback Todd Mattox had 312 of those yards and four touchdowns as the Pirates rolled past the Savages, 59-16, at Costner Stadium in a showdown to decide the District 4A-4 champion.

“I’ve had 600 (total yards) before but I’ve never had near 600 yards rushing, so that’s a first for me,” Poteau coach Greg Werner said. “It is what it is; we kept working, we kept doing it (running the football). … Here around these parts, we’re not afraid to just line up and keep running it if it’s working, and so it was working.

“Todd and all the backs had a great game no doubt, but our offensive line was just unreal. They were just unbelievable.”

“It’s the closest knit group of linemen. … They are so tight and they work so well together,” Werner said. “They’ve kind of reached a point to where they talk to each other a lot more than I do to them because they’re talking, ‘What do we need to do when we do this?’

“They make my job easier because I coach the o-line, but they make it really easy just by the way they work together.”

Todd Mattox, the Pirates’ leading rusher, had 199 yards on 14 carries in the first half and scored his team’s first three touchdowns. He added another touchdown in the third quarter.

“I couldn’t have done it without all the people up front anyways, but it’s kind of shocking; I didn’t think I would have that many (312 yards), but I can’t do it without the guys up front blocking for me,” Mattox said.

“We have so many different guys to go to, so it’s hard to stop just one guy. Just with all the options we have, it’s hard to really stop.”

Friday’s win also gave Poteau its fourth consecutive District 4A-4 championship, and they have now won 28 straight district ballgames. That span includes an undefeated regular season in 2018 and the Class 4A state championship the following season, the first state title in the history of the Pirates’ program.

“Our preparation’s been great but it’s about to go tenfold and it’s going to take focus,” senior linebacker/tight end Dean Odom, who played on that 2019 title team, said.

The Pirates (9-1, 7-0) will get to be at home at least one more time, against Catoosa in next week’s opening round of the 4A playoffs, and with a win there, will play at home again in the quarterfinals.

In the first half, the Pirates ran 30 plays, all on the ground. The Pirates actually tried to attempt a pass, but it resulted in a sack and subsequent fumble, which the Savages recovered. Broken Bow also recovered another fumble in the opening half.

Other than that, however, the Pirates dictated the tempo with their run offense. Poteau rushed for 305 yards in the first half, with Mattox, a senior tailback, a huge beneficiary.

Poteau’s stellar defense then did the rest. Aside from a 61-yard run on the Savages’ opening offensive play, Poteau held Broken Bow to minus 18 yards the remainder of the first half.

The Pirates started quickly after winning the toss and deciding to field the opening kickoff. They needed six plays over 65 yards to move in front to stay.

Mattox took a handoff from third-and-3 from the Broken Bow 7 and surged forward into the end zone. Ethan McBee’s PAT made it 7-0, Pirates, just 3:06 into the contest.

Broken Bow quickly answered, starting with its aforementioned 61-yard dash from Kannan Willis down to the Pirates’ 4. But the Poteau defense stiffened from there, forcing the Savages’ offense off the field.

AZ Zaragoza came on to kick a 21-yard field goal, closing the Pirates’ lead to 7-3 with 7:54 left in the opening quarter.

It ended up being as close as the Savages would get the remainder of the night.

Though Poteau fumbled on its next series, the Pirates were able to force a punt and got the ball back. From there, they went 63 yards in eight plays, capped by Mattox’s second TD, as he followed the path of his blockers from 12 yards out.

After Poteau forced yet another punt, the Pirates struck again, marching 71 yards in seven plays; naturally all on running plays. And Mattox wound up with a hat trick, darting in from 22 yards out as the Pirates built a commanding 21-3 advantage with 5:58 left in the first half.

Poteau got the ball back again after forcing a Savages’ punt. This time, the Pirates needed just four plays to reach the end zone again.

Mattox helped lead the drive with a 54-yard run to the Broken Bow 30 and an 18-yard dash to set up first-and-goal from the 9. But from there, Dylan Tucker got the call and went in for the final 9 yards, as Poteau made it 28-3 with 2:19 left until halftime.

Poteau also recorded four sacks in the first half, two each from linebackers Odom and Jeffrey Martin, the latter on the final play of the first half.

Odom ended up with three sacks, getting one more in the second half.

“This defense reminds me of our 2019 state championship run defense; I can just see it getting better every single week,” Odom said. “At the beginning, we had a couple of guys that could play right up front, and then we’re getting deeper and deeper with our different types of guys that we can play.

“We just continue to get better, the film watching’s getting better, everyone’s understanding more and it’s just a great defense to be on.”

Poteau’s good fortune continued to start the second half, when Broken Bow fumbled the kickoff, as the Pirates made the recovery. Four plays later, Odom scored on a 2-yard run as Poteau made it 35-3.

It became 42-3 on Poteau’s next drive, as the Pirates moved the ball 90 yards in just seven plays. Mattox had his fourth TD of the night, going in from 6 yards out to follow a huge block from Dill.

The Pirates attempted only one pass all night, but that went for a touchdown, as quarterback Jaxton Rutledge threw a short sideline route to sophomore Dax Collins. Collins did the rest, breaking loose down the sideline for a 52-yard TD late in the third quarter, which gave Poteau a 42-9 advantage.

Poteau built a 50-point lead in the final quarter, on a 30-yard field goal from McBee, along with a 54-yard run from senior tailback Caden Warren. Jorge Martinez kicked the PAT to make it 59-9 with 7:24 left.

The Savages got two second-half touchdowns, a 52-yard pass from quarterback Christian Brumley to receiver Britten Dollarhide, and then a 41-yard run from Willis in the final minutes.

Willis had 125 yards rushing on just five carries. Brumley was 10-of-23 passing for 201 yards, with receiver Kyran Whitfield catching three passes for 60 yards.