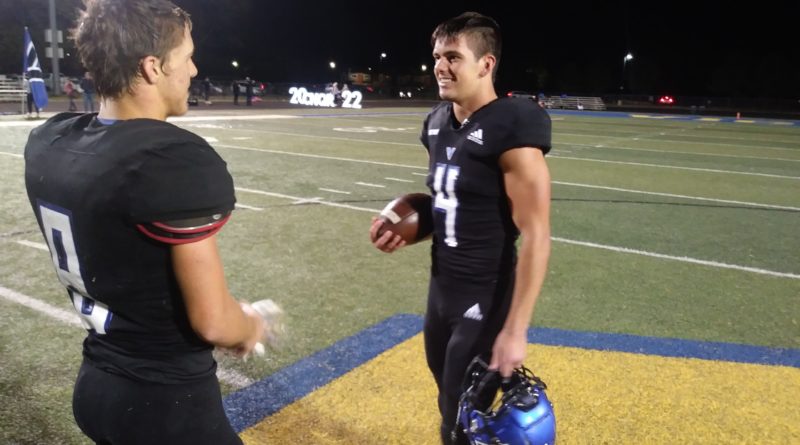 TULSA — Instead of just being the last regular-season high school football game in Oklahoma, Beggs and Victory Christian had a collegiate feel to it.

Because of scheduling issues, the game to decide the District 2A-7 championship was moved to Saturday night. And as it turned out, the Demons and Conquerors put on a finale worthy of one more appetizer before the playoffs get started.

In a wild fourth quarter, with both teams combining to score five touchdowns, the Conquerors had the final TD and kept the Demons out of the end zone one more time.

Victory Christian rallied from two double-digit deficits in the fourth quarter and took the lead with 3:47 left. The Conqueror defense then turned back a Beggs drive inside the red zone in the closing seconds for a 27-26 win in a District 2A-7 showdown Saturday night at Victory Stadium.

Just two years after finishing 3-7, the Conquerors (8-2, 7-0) can now call themselves district champions. They also got the No. 1 playoff seed from the district, and will open the playoffs at home Friday against Adair.

“I couldn’t be more proud of my kids and my coaches, they did it, they did it and never gave up, and that shows what the culture that we’re building here and in the offseason, it’s paying off and these kids have bought into it. It’s all them,” second-year Victory coach Ben Palmer said.

The Conquerors were down by 12 points, 26-14, with 8:34 left after Demon freshman tailback Ryan Grayson sped 79 yards to the end zone.

But four plays later, Victory was right back in the game as quarterback Triton Chandler launched a 50-yard strike to receiver Joshua Udoumoh. The PAT kick from Mitchell Trotter cut the Demons’ lead to 26-21.

Victory’s defense then forced a punt, and the Conquerors got the ball back at their 37. They went backwards to the 30 on first down, and on second down, a pass fell incomplete, forcing a third-and-17.

But Victory marched onward when Chandler hooked up with Udoumoh again for a 35-yard gain to the Beggs 35. Two plays later, from the 28, tailback Solomon Byrams manuevered down the left side and helped by a block from teammate Luke Freeman, sprung free.

Byrams finished off the touchdown run with 3:47 left as the Conquerors went in front by one. A try for two points failed.

“I saw an opening, and I didn’t know if I was going to make it until Luke got that block, and I went around,” Byrams said. “It’s just crazy.

“My teammates just kept telling me to keep focusing on the end of the game no matter how it ends, and I wanted to win, so that’s what I did, I tried to win. And I trusted my teammates to block.”

Beggs, though, had one more shot and the Demons (8-2, 6-1) drove down inside the VC 10. But the Conqueror defense rose to the occasion, and forced a fourth down at the 15.

Victory’s defensive line then prevented Beggs quarterback Ayden Hamilton from finding time to spot an open receiver, and Hamilton took off. However, he didn’t go very far as Conqueror lineman Ethan Alter made the stop at his 13-yard line with five seconds left.

“They had 15 yards to go, and I wasn’t going to be up on the line watching the run, I was staying back, I was looking for something special, and they did; they went for a pass,” Victory sophomore linebacker Teyton Chandler said. “They’re not passing usually, and our d-line had a great play; they stopped him, they tackled him right there on the line of scrimmage.”

Teyton’s older brother, Triton, took a knee on the next play, wrapping up the Conquerors’ comeback.

“It all came together and they executed. … We really didn’t do anything different; our kids, they just knew we were going to go win,” Palmer said.

Triton Chandler said he had no doubts his team was going to be able to come back. Not just down 20-7 to start the fourth quarter or even 26-14 later on, but when the Conquerors went into halftime trailing 12-7.

“We went in the locker room at halftime and we were down, but it did not feel like we were down,” Chandler said. “In everyone’s mindset, we were ready and when we came back out here, it felt like we were winning. It was just the mentality we have and that was big.”

Chandler finished the game with 166 yards passing, completing 8-of-16 attempts while adding 59 yards on 13 carries with a touchdown.

Udoumoh had four receptions for 127 yards and his TD, and Freeman had the other four catches for 39 yards.

Byrams finished the night as the team’s top rusher with 73 yards on 11 carries and two TDs. He scored the Conquerors’ first TD from a yard out in the opening quarter that gave Victory a 7-0 lead.

Beggs came back with two second-quarter touchdowns, a 20-yard pass from Hamilton to Braylon Davis; then a 10-yard run on fourth down by senior tailback and Oklahoma State commit CJ Brown that gave the Demons a 12-7 lead.

The Demons made it 20-7 on the opening play of the fourth quarter. They completed a 14-play drive that took nearly nine minutes off the clock as Hamilton connected with receiver Louis Jupiter for a 19-yard TD pass on fourth down, and Brown added a two-point run.

Beggs sophomore tailback Red Martel had 42 yards in the first half, but left the game with a shoulder injury on the final play before halftime.

The Demons will play at home in the first round of the 2A playoffs on Friday against Sequoyah-Claremore.