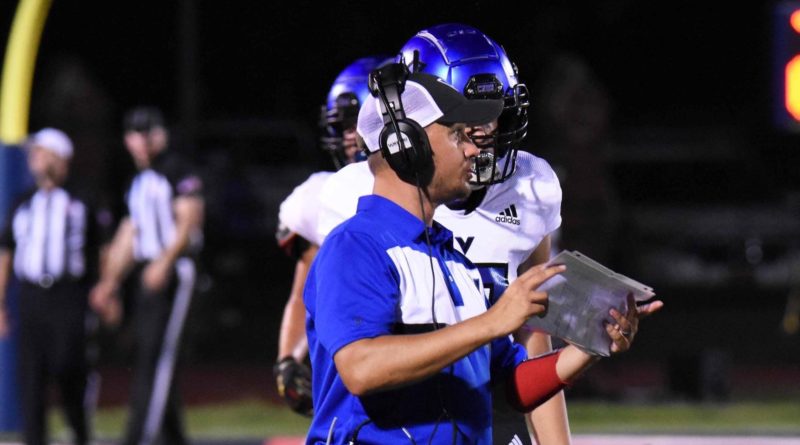 It was already going to be a highly anticipated game in Tulsa this week with Victory Christian welcoming in Beggs.

Two teams with undefeated district records, squaring off in the regular-season finale with the 2A-7 title going to the victor.

Instead, it will be held on Saturday night due to various scheduling conflicts. Nevertheless, it will be the only game in town, and the final regular-season game in the state. An appetizer, if you will, for the playoff smorgasbord coming up on the horizon.

“The Saturday schedule wasn’t ideal, but at the same time, there’s a lot of positives,” Palmer said. “We’re expecting to have a great crowd, and even if we were playing on a regular Friday night, we’re expecting our community to show up and we know the Beggs community travels well, so we knew regardless it’s going to be a rocking atmosphere, a championship-type atmosphere for a championship game.

“It will be the only game in town and the regular season finale across the state, and we know we’re going to have a lot of eyes on us and media there, and we think the kids from both teams deserve that.”

Though both the Demons and Conquerors share first place, it’s still a matter of perception this is a game between the establishment and the upstart.

Beggs (8-1, 6-0) is long considered one of the favorites to win the Class 2A title, and the Demons already have one big win under their belt, having traveled to Tulsa last month and coming away with a 24-22 win against defending 2A champion Metro Christian. The Demons also possess two of the best running backs in the state in Oklahoma State commit CJ Brown and sophomore Red Martel, as well as a swarming defense.

Victory Christian (7-2, 6-0), on the other hand, is still a relatively young squad. The Conquerors have three senior starters on offense and two seniors on defense.

But Palmer, having taken over a team that went 3-7 the season before he arrived and went 6-6 in his debut season with the Conquerors, believes his team is ready for the challenge.

“I think they’re the team to beat in the state for our classification, and we’re excited to spot the ball down with them and prove that we belong in that top tier of teams as well,” Palmer said. “We feel like we’re in that top group this year; we feel like our kids have earned that right, our coaches have done a good job getting our kids ready all season. We like playing good teams and we’re excited for that opportunity.”

Victory also has a win against Metro Christian, which was on Oct. 14. The score, however, was a surprising one to many: 62-7.

A score that surprised even acquaintances of the Conquerors’ coach.

“There was a lot of people texting me after the game saying they thought Skordle and the news reports were wrong, and they had it reversed or something, so that was kind of funny just that I don’t think anybody really expected that,” Palmer said.

The Conquerors showed that win was no fluke, posting two more decisive wins in the next two weeks against Okmulgee and Henryetta to set up Saturday’s showdown.

Palmer remarked one of the defining things about his squad is their cohesiveness and ability to play as a unit.

“I’ve been very fortunate in my career to be on championship programs in a couple of different states and these guys have got it,” he said.

Saturday’s game also gives Palmer a chance for his team to show they also belong among the elite hierarchy of teams in the greater Tulsa metropolitan area, from the big schools like Bixby, Jenks and Union to the Metro Christians and Holland Halls.

It’s also an opportunity for Palmer to further validate his decision to come to Tulsa.

A native of Katy, Texas, Palmer learned to embrace football at an early age. He picked up coaching in San Diego shortly after serving a stint in the Marine Corps.

Palmer then went to Louisiana, serving as head coach at a private school in Baton Rouge and was most recently the offensive coordinator at Calvary Baptist in Shreveport, La.

Then, he heard about the opening at Victory and decided to pursue the job.

“My wife and I was looking to make a change for our family,” Palmer said. “We saw this job open up and just kind of looked into it and it reminded me a lot of the last head coaching job I had. The church seemed like an amazing place and the school seemed like it had everything going for it.

And on Saturday night, Palmer wants to keep the good vibes going by bringing home a district title.

In the only game going on in town and around the state.

“To see our kids get that opportunity, to kind of just be in that limelight, and to get their hard work recognized and just to have that opportunity to enjoy a big-time football game like big-time schools do week in and week out, it’s a lot of excitement and we’re happy that’s happening at the end of the day,” Palmer said. “It’s going to be fun for the kids on both sides.”