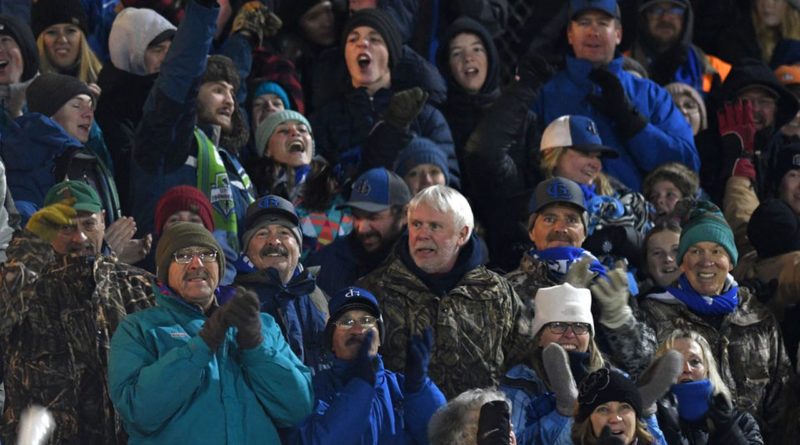 Some teams will be facing the end of its season this week. For others, they are fighting to earn playoff berths. Then for others, a district championship and a No. 1 playoff seed will be at stake.

Here are the Top 10 high school football games to watch in Oklahoma for this week.

This has been one of the most highly anticipated Week 10 matchups all season long, and now the Spartans hook up with the Hornets.

Of course, the main storyline is if Bixby (9-0, 6-0 6AII-2) can continue its march toward setting the state record for consecutive wins. The Spartans now stand at 45 straight wins, needing four more to break the record of 48 set by Wagoner in the last decade.

Friday’s matchup will be highlighted by the appearance of Bixby receiver and Oklahoma State commit Braylin Presley, who did not play in the Spartans’ win at Ponca City last week while recovering from an ankle injury, and BTW defensive back Gentry Williams, an Oklahoma commit. But it could also come down to quarterback play, as Spartan quarterback Christian Burke and Hornet signal-caller Lathan Boone have both thrown for more than 2,000 yards and 25 touchdowns.

Even if BTW (8-1, 5-1) breaks the Bixby streak, it may not be enough to guarantee the Hornets the division title and the No. 1 playoff seed from 6AII-2. They will need Choctaw – which handed BTW its only defeat – to lose to Bartlesville in order to get the higher seed.

Through the first half of the regular season, the Lions were one of the pleasant surprises in the state, having won their first five ballgames. But Moore (6-3, 3-3 6AI-2) is in danger of missing out on the playoffs after dropping three of its past four ballgames.

The Lions can qualify for the postseason with the No. 4 seed from 6AI-2 with a win Friday coupled with a Norman North loss at Southmoore.

Mustang (6-3, 5-1) is already assured of the No. 2 seed from the district and will get to host an opening-round playoff game next week, so Friday’s game is a chance for the Broncos to continue their momentum of late, highlighted by their big road win two weeks ago at Owasso.

This matchup lost a little bit of its luster with the Tigers’ overtime loss to Noble last week, denying a matchup between two 9-0 squads.

Lawton Mac can achieve a perfect regular season and the outright 5A-1 district title with a win. Ardmore will need to win and have Noble lose to Oklahoma City Capitol Hill in order to grab the top playoff seed, but a loss likely drops the Tigers to the No. 3 playoff seed out of the district, forcing them to open next week’s postseason on the road.

The 4A-1 title and the district’s top playoff seed will be awarded to the winner of Friday’s matchup, to be played at Clinton’s venerable Tornado Bowl, as both the Bronchos (8-1, 6-0) and Red Tornadoes (8-1, 6-0) share first place.

Bethany junior quarterback Taylor Heim has thrown for more than 1,300 yards and 14 TDs while adding nearly 750 yards and 10 TDs rushing. Last week, Heim rushed for 134 yards and two TDs and added 178 yards and two TDs in the Bronchos’ 42-20 win against Weatherford. In his last four games, Heim has averaged 192 yards passing and 10 total TDs.

Clinton has a solid quarterback of its own in senior Caden Powell, an Oklahoma baseball commit. In the Red Tornadoes’ season-opening win at Woodward, Powell threw for 151 yards and three TDs. Last week, he threw for two TDs and ran it in for two more in Clinton’s 34-0 win against Elk City.

The Red Tornadoes’ defense has also come through of late. In their last four games, they have allowed a total of 13 points, including back-to-back shutouts the past two weeks against Weatherford and Elk City.

Another outright district title in Class 4A will be on the line, as traditional rivals Broken Bow and Poteau square off for the 4A-4 crown.

Since Broken Bow’s opening-week loss to highly ranked 5A squad McAlester, the Savages have allowed 76 total points during their current eight-game winning streak, including four shutouts, three coming in 4A-4 play.

The Pirates’ defense has been just as relentless, giving up a total of 49 points in all six district wins, including a pair of shutouts.

Since 2004, Poteau has enjoyed a 10-7 edge in the series, including winning seven of the previous eight meetings with the Savages. Pirate coach Greg Werner, who formerly was at Broken Bow, is 4-1 against his former team after leaving Broken Bow to take over at Poteau prior to the 2012 season, and returned to coach at Poteau prior to 2019.

But Friday’s contest took on a whole new meaning after the finish of last week’s Wagoner-Grove game. With the score tied at 20-all on the final play and the Ridgerunners backed up near their own goal line, Grove coach Ron Culwell called for an intentional safety, resulting in Wagoner pulling out a 22-20 win.

Grove can clinch the No. 1 seed with a win by at least 11 points against Miami, a Wagoner win against Skiatook and Bristow beating Oologah. But a Bristow loss likely drops the Ridgerunners to the second seed regardless of their outcome with Miami.

Since a 34-28 loss to Grove on Oct. 8, the Pirates have won three straight games with an average margin of 39.6 points.

Oologah snapped a two-game losing streak last week with a 56-13 win against Cleveland.

The other 4A district, 4A-2, also will come down in large part to the winner of this game.

Tuttle (9-0, 6-0) currently owns first place and a win on its home field Friday gives the Tigers the outright district title and top seed. The Tigers were in a similar position last season, taking a 9-0 record into the regular season finale with Blanchard, only to have the Lions pull off a 7-0 win.

Blanchard (7-2, 5-1) is tied for second place in the district with Cushing, which beat the Lions. The Lions can get the top seed with a win along with a Cushing loss to Harrah.

Over the past eight games in this series, dating to 2013, both Blanchard and Tuttle have won four games apiece.

Most people didn’t think Stigler could duplicate its success from a season ago, in which the Panthers reached the 3A semifinals. The team was hit hard by graduation; not to mention they were breaking in a new coach.

But Stigler, which has won at least nine games four out of the past five seasons, is back in familiar territory, challenging for a district title and a potential deep postseason run.

The Panthers (8-1, 4-1 3A-3) stand in a tie for second place with Seminole, the only team to defeat Stigler. As a result, Stigler must win Friday while having Seminole lose to Sequoyah-Tahlequah in order for the Panthers to get the No. 1 seed.

Lincoln Christian (9-0, 5-0), which drew a bye last week, can lock up the top seed with a win Friday and head into the playoffs as one of the heavy favorites to claim the gold ball in 3A.

It’s very simple in this matchup between undefeated teams: The winner grabs the outright A-1 title and the top seed for the playoffs.

Hooker (9-0, 6-0) had one close shave in district play, a 35-34 win against Burns Flat-Dill City. Last week, the Bulldogs took care of business in a key home game against Mooreland, prevailing 34-8.

Fairview (9-0, 6-0) had its lowest margin of victory in non-district play, winning by eight against Alva. In A-1 action, the Yellowjackets have won all six games by an average margin of 30.2 points.

This will be the last regular season game in the state, which was moved from Friday due to a scheduling issue. But it will be one of the more tantalizing games in Week 10.

Saturday’s game in Tulsa will decide the 2A-7 champion.

Beggs (8-1, 6-0) made a similar trip to Tulsa last month and came away with a 24-22 win at defending 2A champion Metro Christian, which propelled the Demons to this point. Beggs also posted a win at a Kiefer squad that was 6-1 at the time.

During the Demons’ current eight-game winning streak, they have scored at least 58 points in half of those games, including 82 twice.

Victory Christian (7-2, 6-0) recorded perhaps the most stunning score this season, when the Conquerors overwhelmed Metro Christian, 62-7. Since then, Victory scored 77 and 59 points in wins against Okmulgee and Henryetta, respectively.