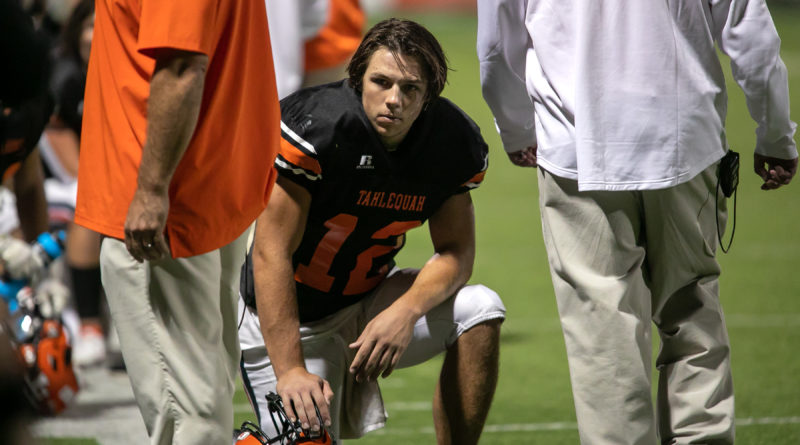 Over the next few weeks, we’ll be taking a position-by-position look at some of the top players in Oklahoma high school football. This list focuses on the quarterbacks.

There are hundreds of standout football players in Oklahoma and these lists are not intended to be comprehensive. Use the comments section to discuss the other signal-callers worthy of fans’ attention in 2021.

In his first season starting, Frakes made an immediate impact in the Timberwolves’ opening game, when he threw for 302 yards and five touchdowns in a win against crosstown rival Norman. Frakes, who has committed to Princeton, has gone on to throw for 1,581 yards, completing 68 percent of his passes, along with 18 touchdowns.

Pfieffer threw for nearly 2,400 yards and 29 TDs last season in helping the Wolves reach the 6AI championship game. This season, he has passed for more than 1,600 yards, completing 122-of-186 of his throws, while recording 17 TDs.

Through eight games, Brown has nearly equaled his yardage total from a season ago, when he helped lead the Bulldogs to the 3A title game. Brown, a Central Michigan commit, has passed for 1,668 yards, one yard fewer than his total as a junior, while completing 73 percent of his passes (96-of-131) and 26 TDs while throwing just three interceptions in helping LC get out to an 8-0 start.

A returning starter, Paque has passed for 1,347 yards on 79-of-118 passing and 14 TDs for the Chargers, who have won their first seven ballgames and is a legitimate Class 3A title contender.

Last season, Pennington accounted for approximately 3,000 yards of total offense with 28 total TDs. This season, he is 109-of-175 passing for 1,543 yards and 17 TDs while rushing for more than 300 yards and six TDs in helping the Sandites win their first five ballgames. Pennington has also thrown for more than 5,100 yards, setting the school record.

Entering his senior season, May has thrown for nearly 5,500 yards and 50 touchdowns in his career as a Longhorn. Over the summer, May committed to play at Iowa. In a recent win against Kellyville, May completed 20-of-22 passes for 302 yards and three TDs while adding a rushing TD. He also threw for 232 yards and four TDs in a win against Chandler and had a 281-yard four-TD performance in a win against Star Spencer.

In his first season to start during his sophomore year, Wasel threw for 3,300 yards and 33 touchdowns as the Yellowjackets reached the 6AII title game. Wasel, who has received attention from several DI schools, threw for five TDs in an early-season game against Springdale (Ark.), and is a reason why the Yellowjackets have another good chance to play for a 6AII championship.

A returning starter, Donovan has thrown for nearly 1,400 yards and 13 TDs while completing 115-of-207 passes for the Bears.

Parker threw for nearly 3,000 yards and 35 TDs a season ago for the Bulldogs, who reached the third round of the Class A playoffs. He’s completed 112-of-183 passes for 1,538 yards and 21 TDs this season for Hooker, which won each of its first seven games.

As a freshman, Woods accounted for nearly 1,150 yards of total offense. He’s more than eclipsed that as a sophomore, as Woods has already thrown for approximately 1,970 yards and 16 TDs on 115-of-187 passing.

Drummond follows in the footsteps of his older brother Bryce, who is now at North Texas. The younger Drummond has carried on the family legacy at Pawhuska, having completed 135-of-199 passes for 1,832 yards and 30 touchdowns. In a recent win against Quapaw, Drummond threw for 320 yards and accounted for eight total TDs.

As a sophomore, Havens threw for more than 2,050 yards and 24 TDs as the Rams went 12-1 and reached the 6AI semifinals. This season, he has thrown for nearly 1,700 yards, completing 101-of-157 attempts. Havens has completed 20 touchdown passes as well.

Prior to this season, McKeefry had been playing in California. In his only high school season with the Bulldogs, McKeefry is making an immediate impact as he has completed 65 percent of his passes and has thrown for 2,231 yards and 22 touchdowns.

As a sophomore, Berlowitz threw for more than 3,000 yards and 27 touchdowns and he’s followed that up with another stellar season. He has nearly 2,100 yards this season with 25 TDs, completing 132-of-212 passes for a Tiger squad that won six of their first seven ballgames.

While he has plenty of weapons to throw to like Oklahoma State commit Braylin Presley and Oklahoma commit Luke Hasz, Burke has equally made a name for himself for the Spartans, who are closing in on another 6AII championship, not to mention setting a state record consecutive win streak. Burke has thrown for 1,735 yards and 22 TDs on 121-of-173 passing for the Spartans, who won their 43rd straight game on Oct. 14.

In his first season to start, Cooksey has made an immediate impact for a Lion team that is competing for the 4A-3 district title. Cooksey has thrown for more than 1,675 yards and 15 TDs while completing 65 percent of his passes.

Snead, who primarily played defensive back prior to this season, has stepped in at quarterback and has enjoyed a solid year. He has completed 89-of-160 passes for 1,638 yards and 21 TDs thus far for the Tigers.

A season ago, Boone threw for more than 1,700 yards and 14 TDs. Already this season, he has amassed 1,560 yards and 18 TDs for the Hornets, who are challenging the likes of Bixby and Choctaw for the 6AII championship. Boone also completed 21-of-29 passes for 253 yards and three TDs at Sand Springs in October, as BTW handed the Sandites their first loss of the season.

Pense has been a big reason the Antlers have rebounded from last season’s 4-6 finish, having won six of their first seven ballgames in 2021. He has completed 96-of-155 attempts for 1,440 yards and 17 TDs while throwing just one interception.

Watie has completed 99-of-162 passes for nearly 1,349 yards and 16 TDs in his final season for the Chiefs. In a key 3A-4 win against Verdigris, Watie passed for 136 yards and two TDs while rushing for another TD.

Swanson is a returning starter behind center for the Tigers, who went from four wins in 2020 to a 7-0 start in 2021. Through his first five ballgames, Swanson threw for 863 yards, rushed for 223 and had 16 TDs while completing 75 percent of his passes. He had four first-half TD passes in a recent win at Capitol Hill.

As a junior, Joice threw for nearly 1,400 yards and 14 TDs while setting a school record for completion percentage at 63. This season, he’s amassed 877 yards and 10 touchdowns while completing 58 percent of his attempts, along with rushing for nearly 300 yards and five TDs. Against a ranked Sapulpa team, Joice helped rally the Tigers from a 14-0 deficit with a 21-14 win by completing 15-of-18 passes for 138 yards and a TD, along with a game-winning TD run.

Powell, who also plays linebacker and punts for the Red Tornadoes, has thrown for 475 yards and eight TDs without an interception over the team’s first seven games. He has also rushed for nearly 370 yards and nine TDs. Powell is one of the top baseball players in the state as a pitcher/infielder and has committed to Oklahoma.

While Rutledge hasn’t put up very many passing yards this season, having thrown for 369 yards, he really hasn’t had to as the Pirates have largely overpowered their foes with their run game. But when Rutledge has had the chance to throw, he has been very effective. He completed all five of his passes for 125 yards in a 4A-4 win against Tulsa McLain and also went 8-of-9 in another district win against Stilwell. Plus, the season before, he threw for nearly 1,500 yards and ran for 700 more at Pocola before transferring to Poteau in the offseason, so Rutledge could be a big key to the Pirates’ chances at winning their second 4A title in a span of three seasons.

Hardwick, who transferred to Pocola in the offseason from Fort Smith (Ark.) Northside, can play a number of different positions, from wide receiver to running back while playing in the defensive secondary. He has helped give the Indians a lift at quarterback lately. Hardwick was 9-of-12 passing for 120 yards and two TDs while adding 74 rushing yards and a TD in a win against Panama; then in a win against Roland, Hardwick threw for 120 yards and two TDs.

A dual threat athlete, McIntosh accounted for more than 3,500 yards of total offense and passed for 25 TDs while rushing for 16 more last season. In a recent win against Christian Heritage, McIntosh went for 399 yards passing and three TDs and added 187 yards rushing and two TDs. He also threw for 278 yards and six TDs in a win against Holdenville and had 239 yards passing and four total TDs in a win against the OKC Patriots.

Lai, who can both run and pass, has taken over behind center for the Commandos, who are in great shape to make their 35th consecutive postseason appearance. This season, Lai has completed 68-of-103 passes for 873 yards and 14 TDs. In a recent win against Panama, he completed all 10 of his pass attempts for 136 yards and five TDs, which tied a school record.

Stieber, who played tight end for the Tigers last season, moved over to quarterback and has helped Broken Arrow stay in the hunt for a 6AI postseason berth. He has completed 100-of-120 passes for 747 yards and 10 TDs. In his first start, a win against Mansfield (Texas) Legacy, Stieber completed all nine pass attempts for 219 yards and four TDs.