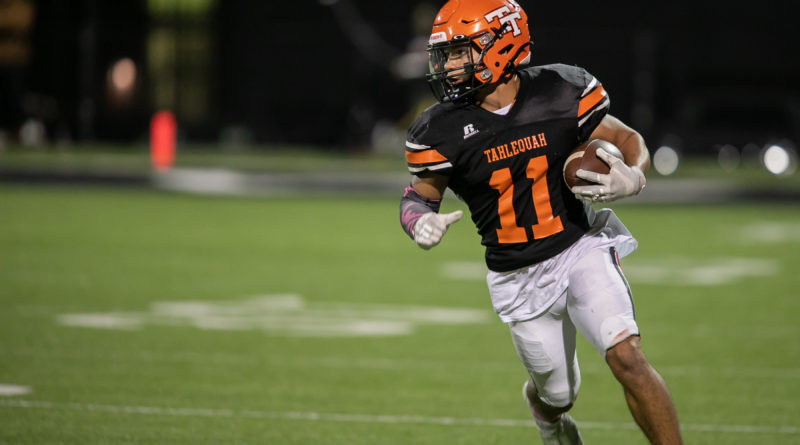 The following is a list of several of the top Oklahoma high school football performers from Week 8.

Keene intercepted four passes, returning one of those for a touchdown, in the Broncos’ huge 47-41 win at Owasso. He also forced a fumble, recovered another fumble and was in on five tackles.

Matteson caught two passes for 104 yards and two TDs, rushed for 133 yards on 12 carries with two TDs, had 52 yards in kickoff returns and recorded nine tackles in the Saints’ 49-14 win against Perry.

Manning caught seven passes for 158 yards and had two TDs as the Wildcats posted a 34-13 win against Ulysses, Kan.

Snyder intercepted three passes, all in the first half, and also recorded three tackles by halftime as the Spartans picked up their 44th consecutive win, downing Muskogee, 56-14.

Carroll rushed for 136 yards on 12 carries and had two TDs as the Trojans prevailed at Yukon, 48-14.

Banks rushed for 157 yards on 16 carries with three TDs and added 66 yards passing in Union’s 30-14 win at Norman North.

The senior standout recorded four sacks, resulting in 37 yards of lost yardage, as the Yellowjackets won at Sand Springs, 41-28.

Brown passed for 280 yards and three touchdowns and also rushed nine times for 71 yards and three more TDs as the Bulldogs moved to 9-0 with a 55-13 win against Checotah.

Horn gained 215 yards on 29 carries and had two touchdowns, including the eventual game-winner with 1:07 remaining, in the Tigers’ wild, come-from-behind 47-42 win against Edmond Santa Fe.

Smith had 123 yards on 20 carries and found the end zone three times, including the game-winner in overtime, as the Eagles rallied for a 35-28 win at Edmond Deer Creek.

Crawford rushed for two touchdowns and picked up 101 yards, added a receiving TD and returned a punt 58 yards for another TD in the undefeated Ridgerunners’ 56-7 win against Cleveland.

Martel rushed for three touchdowns, including a 72-yard jaunt, as the Demons downed Kiefer, 44-14.

Moton had a career-high 165 yards on 10 carries and scored two TDs as the Buffaloes moved to 8-0 after a 52-17 win against Tulsa Edison.

A freshman, Booth rushed for more than 100 yards and scored two touchdowns in the Pioneers’ 70-0 win at Northwest Classen.

Carney threw five touchdown passes, all coming in the first half, as the Cardinals moved to 8-0 after a 71-7 win against Tulsa Memorial.

Hamm threw four touchdown passes as the Tigers prevailed on the road, winning at Shawnee, 41-13.

Scott caught two first-half touchdown passes and returned an interception for another TD before halftime as the undefeated Tigers rolled to a 49-7 win against El Reno.

The senior tailback rushed for 116 yards on 18 carries and three TDs and also caught two passes for 52 yards, including a 39-yard TD, as the Tigers won at home, 47-13, against Glenpool.

Rodriguez completed 11-of-21 passes for 185 yards and three TDs while adding 70 yards rushing in the Bulldogs’ 52-0 win at Oologah.

Roller threw four touchdown passes, three of those coming in the opening quarter, in Regent Prep’s 55-0 win against Foyil.

Snodgrass rushed for 116 yards on 24 carries and two touchdowns while intercepting a pass on defense in Kingfisher’s 15-13 win against Mount St. Mary.

Taffe accounted for all the Fighting Irish’s points with three rushing touchdowns, one of which covered 27 yards, in their 18-0 win against Piedmont.

Bergt threw three TD passes and added a pair of TD runs in the Racers’ 44-21 win against Elgin.

Crites scored the Eagles’ first two touchdowns, including a 78-yard dash, in their 33-18 win against Alva.

Deere caught three passes for 139 yards and two TDs and also returned a punt 65 yards for another TD in the Ironheads’ 49-28 win against Idabel.

Harper had three receptions for 104 yards, with all three going for touchdowns, as the Hornets prevailed at Sallisaw, 56-13.

Brumley threw for three touchdowns and added a rushing touchdown as the Savages won a pivotal 4A-4 game against Fort Gibson, 37-24.

Jackson rushed for 105 yards on seven carries and scored three TDs in the Eagles’ 76-0 win against Canadian.

Moore rushed for 327 yards on 28 carries and had two touchdowns in the Panthers’ 42-19 win against Tecumseh.

Taylor had four touchdown runs as the Cougars outlasted Spiro, 32-29.

Jackson rushed for 251 yards on 19 carries and had three TDs in the Buccaneers’ 33-14 win against Hinton.