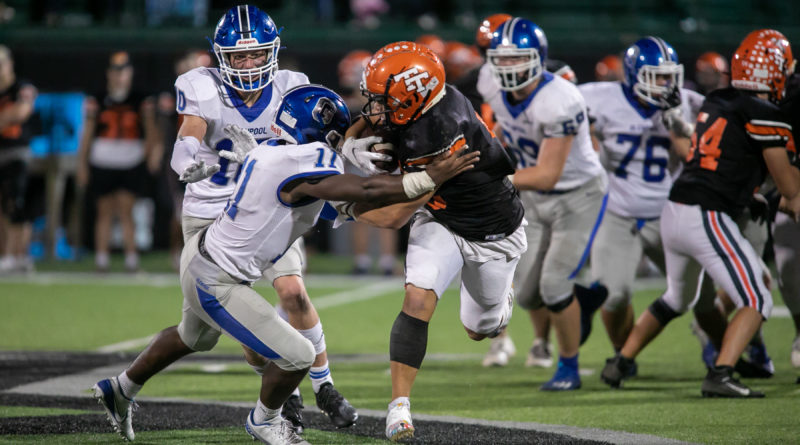 TAHLEQUAH, Okla. — Over the past couple of weeks, Tahlequah had to turn second-half deficits into eventual wins.

Friday night, the Tigers didn’t need to rally after intermission. Instead, they were able to put together a strong offensive showing from the get-go.

Senior tailback Malik McMurtrey scored four touchdowns and senior quarterback Tyler Joice passed for two TDs and ran for another as Tahlequah went on to defeat Glenpool, 47-13, in District 5A-4 action at Doc Wadley Stadium on the Northeastern State University campus.

“I just think over the course of the past four weeks, just the maturity and just the development of those young men that are playing on Friday night for us, they’ve continued to get better,” Tahlequah coach Brad Gilbert said. “We’re a really young football team and we haven’t really put four quarters together yet this year; we did Week 3 against Sallisaw, but we haven’t done that once we got into district play.

“So that was something that we kind of challenged them with all week, and I think they came out and kind of responded the right way and then they put four quarters together.”

Two weeks ago, Tahlequah rallied from a 14-0 halftime deficit to defeat Sapulpa, 21-14. Last week, the Tigers trailed Claremore in the second half, 14-13, before rallying to pull out another 21-14 win.

“(Friday) was refreshing in the fact that we got out and we stayed out in front,” Gilbert said. “Those games the last couple of weeks are great for everybody involved, but even more so probably for the fans.

“And they’re great for us to come out on the right side, it’s a great momentum builder. But we as coaches like these nights, too, because it was a complete game, and any time you can put a complete game together, I think you can walk away pretty proud of them.”

Friday’s win also allowed Tahlequah to keep pace with 5A-4 co-leaders Collinsville and Pryor, as the Tigers trail those two teams by a game. Tahlequah (6-2, 4-1) lost to Pryor and will play at home against Collinsville on Nov. 5. Next Friday, Pryor travels to face Collinsville.

“If we have a shot in Week 10 (at the district title), then that’s all we can ask for,” Gilbert said. “We’ll have to wait and see and see how things go.”

Tahlequah racked up 527 yards of total offense, rushing 45 times for 294 yards and passing for 233 more.

The four touchdowns McMurtrey scored was a career first for him as a Tiger.

“We came in ready to play,” McMurtrey said. “Our offensive line has been putting in work, and I’ve got to give credit to them for all the blocks and our quarterback, too, coming through.

“I like being in the backfield with Tyler; I think that whenever we have a bad play or something like that, he doesn’t get down about it, he always picks up his head and he’s always ready to go for the next play.”

Glenpool (4-4, 2-3) won the toss and received the opening kickoff, but Tahlequah’s defense forced a three-and-out, resulting in a punt.

The Tigers then moved the ball 52 yards in eight plays on their opening series. Joice finished off the drive by launching a deep pass to freshman receiver Beckett Robinson inside the Warrior 15, and Robinson raced untouched into the end zone for a 33-yard touchdown.

Sophomore kicker Bodee Jimerson tacked on the PAT to give the Tigers a 7-0 lead with 6:37 left in the opening quarter.

The Warriors put together a sustained drive on their second possession, and moved the ball inside the Tigers’ 35. However, the Tahlequah defense stopped Glenpool several yards short of a first down on a fourth-down play.

Tahlequah took over at its own 31 and marched downfield in nine plays. On the second play of the second quarter, McMurtrey received a handoff from Joice and found open space, going in from 16 yards out.

Glenpool answered on the next series, going 64 yards in nine plays. The first eight were running plays; then on the ninth play, freshman quarterback Rueger Tatum hit receiver Ashton Gorbet, who hauled the pass in over a defender in the end zone from 18 yards out.

But the Tigers neutralized that Glenpool TD with a TD of their own. Joice finished off an eight-play, 71-yard drive by taking a keeper 28 yards into the end zone with 5:13 remaining in the opening half.

Jimerson connected on his third PAT of the night for a 21-7 Tahlequah advantage.

The Tigers got the ball back immediately after forcing a three-and-out, and once again found the end zone on an eight-play, 71-yard series. On a second-and-short at the Warrior 39, Joice dumped off a short pass to McMurtrey, who did the rest as he sped down the right sideline to find the end zone for the second time.

“When I caught the short pass and I ran it down, I’ve got to give it to Race Stopp, our receiver,” McMurtrey said. “There was one guy right there and he could have easily made the tackle, but (Stopp) pushed him in and blocked it to where I could score, so I give it to him on that.”

A bad snap on the PAT resulted in a missed conversion attempt, keeping the Tigers’ lead at 20 points, 27-7, with 48 seconds left in the half.

Glenpool got the ball past midfield after a long kickoff return, but Tahlequah defenders Jayden Moore and Jonathan Davis teamed up for a sack as time expired in the first half.

The Warriors kicked off to start the second half, but they executed a successful onside attempt and got the ball. They drove inside the Tiger 15, but Tahlequah defensive back Dylan Leep picked off a pass in the end zone to stop the threat.

Tahlequah then needed just five plays to score another touchdown, as McMurtrey swept around the right side for a 28-yard dash. A two-point try failed, keeping the Tigers up, 33-7, with 9:21 left in the third.

Helped by a long return by Glenpool sophomore Dimicah Woods, the Warriors were able to get their second touchdown, as junior running back Brayden Nelson punched it in from a yard out, cutting the Tahlequah lead to 20, 33-13.

But the Warriors got no closer.

Tahlequah opened the fourth quarter with a 12-play 81-yard drive that took 6:04 off the clock. McMurtrey found the end zone for the fourth time, running it in from 6 yards out, and the PAT from Jimerson gave the Tigers a 40-13 lead with 5:56 remaining.

The Tigers tacked on one final touchdown on their last offensive series, a 25-yard run from backup tailback Josh Richardson with 48 seconds showing on the clock.

“It’s a young group, and you look out there and you’ve got six or seven sophomores playing with a few juniors, so it’s not something that we’re used to around here,” Gilbert said. “But I can’t say enough about how they’ve stepped up and embraced the role which they’ve been asked to play and they’ve played well and they’ve continued to get better each week.”

Glenpool finished with 247 yards of total offense, 181 of those on the ground. Nelson ended up with 150 yards on 25 carries, while Tatum completed 5-of-9 passes for 61 yards.

The Warriors return home next Friday to take on Tulsa Hale, while the Tigers travel to face Tulsa Memorial.