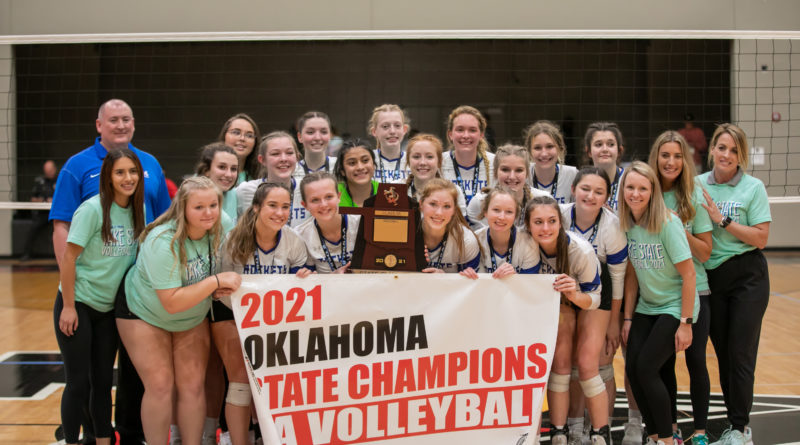 VERDIGRIS — Mount St. Mary felt like a golden opportunity slipped away in the second set of Tuesday’s Class 5A volleyball state championship match.

On the heels of falling one match short of winning it all last season, the Rockets promptly went right back to work and regained the dominant form they established in the opening set with Midwest City Carl Albert.

The Rockets (39-6) also claimed their first state championship since 2016 after falling one match short a season ago.

“Last year, we were really disappointed, we really wanted to win it,” MSM coach James Ward said. “We still had pretty much the same group of girls, so they were really hungry this season.

“Carl Albert did a great job; they really worked hard. It was hard for us to get up on them.”

During the time out between sets, Ward told his players to relax and just play their game.

“I told them we just need to get back to what we do, just work hard, keep the energy on our side and score the points,” he said.

MSM responded, breaking an early 2-all score with four straight points, the last coming on a kill from sophomore outside hitter Ally Fees. The Rockets then built an 18-6 lead after a 7-0 run, which featured kills from senior outside hitter Hadley Moses and freshman Liv Ward along an ace from junior libero Maria Roquemore.

Fees had the next-to-last set point on an uncontested kill, while Roquemore recorded an ace on the set point.

“I think we kind of gave (the second set) to them with some of our errors, but it was more like, this is our game so we’re going to play it like it is, so I think that really helped us come back in the third and fourth set,” Moses said.

Fees then began the fourth set with back-to-back kills, as MSM scored the first five points and later built an 8-2 advantage.

“It was fun (those back-to-back kills), but I couldn’t have done it without my setters passing to me,” Fees said. “It felt great, but I really felt like it helped the team’s momentum, for us to all be together.”

Carl Albert got within two, 11-9, on an ace from senior Zella Heater, before the Rockets scored five of the next six points. Fees recorded kills on each of her team’s final two points, including match point.

“I just wanted to come up and swing,” Fees said. “We were all tired and we wanted the game to end, and so I was happy that our setters gave me a great set and our passers put up a great pass for me to kill.”

“Our serving was really good; not very many misses until maybe towards the end,” James Ward said. “The pressure builds a little and you see a few more missed serves, but I thought our serving was pretty good.

“Then our outside hitters really led the way for us. I also thought our libero, Maria, did a lot of great things, too, defensively. She was really making a difference for us.”

The Rockets have a good chance to repeat next season as they only lose two senior starters, Moses and setter Shelby O’Steen.

But Moses remarked she plans to be in attendance should the Rockets get to have that opportunity to repeat as state champs.

“It feels like I’m on top of the world,” she said. “I think we’ve been working all season for this; every practice, every tournament, every game we’ve played, working toward winning a state championship, and I think I couldn’t have done it without my team and without my coaches.”